So the Lowe's in West Philly (the one off 52nd St. just north of Lancaster Ave.) opens at 9am on Sundays. Two Sundays ago we didn't know that, so when I headed out for more paint for our new apartment at around 8:30am, I found it closed.

I suppose I could have sat in the car and listened to the radio, but I was just a stone's throw from the West Parkside Industrial Park, from which that shopping center had been carved, so I moseyed on over on Jefferson to look around.

Near the shopping center they have an artificial drainage pond meant to ease the flow of runoff into the storm sewers - always nice to see - and across the street from the pond I found a few piles of concrete chunks and other assorted trash.

It was wet and cloudy, so I wasn't expecting much, but I found two little brown snakes (Storeria dekayi) under the first chunk I flipped. 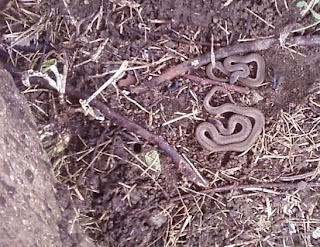 They were all I found, and again I found nothing a couple blocks up Jefferson where they bulldozed my beloved brown snake hibernaculum, but it was still nice to see snakes on such a spur-of-the-moment little trip.
Posted by Bernard Brown at 4:12 AM No comments: