I like them black and velvety. Timber rattlers (Crotalus horridus) all start off beige with dark bands and end up in two basic patterns: either yellow with dark bands or almost all black, with light edging marking off where the bands used to be. Scott tends to go for the blondes, I go for the black ones, particularly when they're clean and lustrous, soaking up the light like pools of shadow in the forest.

Here's one we found in our path on our way up a mountain on Saturday. 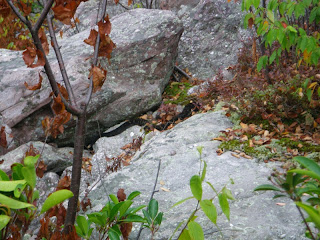 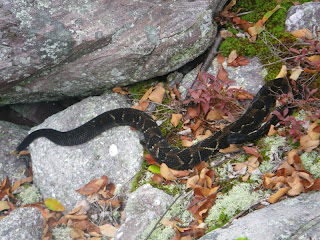 Here's another nearby. The fat back end indicates that this is one of the gravid (pregnant) females that hang out at this spot until they give birth. 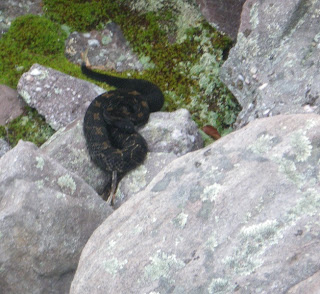 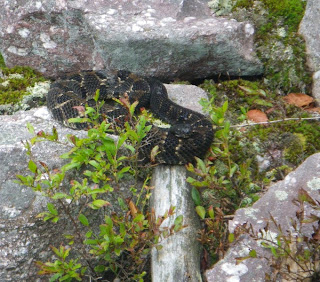 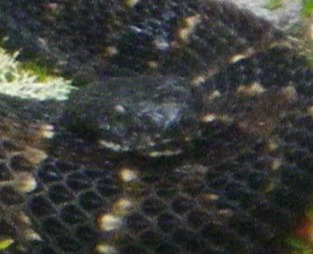 We live in an age of extinctions. It's certainly true for our amphibians - take the recent wave of frog species falling to Bd infections. Some think this could apply to the timber rattlesnakes too. For a couple years I've noticed that some of the rattlers I've seen have ugly lesions on their faces. Other herpers I've been out with commented on it too, and they noted that the lesions are concerning some professionals as well, the fear being that a something similar to the Bd could be coming for our rattlers.

Will Magnolia see these timber rattlers (Crotalus horridus) when she's all grown up? Timbers can live for decades, so in theory it's possible, but that's not what I'm getting at. I mean will these rattlers or their descendents still be on that mountainside when she's old enough to hike out on her own and look for them?

This is a kind of fear that drives a lot of my herping, that the species I'm seeing might not be there (maybe not extinct, but perhaps locally much harder to find) later on, and that I don't want to look back in another twenty years and wish I'd seen more box turtles (Terrapene carolina), or wood turtles (Glyptemys insculpta) before they were all gone... or timber rattlers.

One article on local rattler extinctions in New Hampshire noted a mysterious fungal infection playing a role. A herper on Field Herp Forum noted seeing some of her favorite rattlers waste away with similar lesions to the ones I've seen. It's enough to scare me.

Now, skin infections are pretty common in snakes, particularly in the spring. I frequently see snakes in the spring with ugly blisters all over them. These are commonly assumed to result from damp hibernacula, and they usually clear up. Researchers I have corresponded with commented that they've been seeing PA rattlers with this sort of lesion for decades, and that they're more or less the same kind of temporary infections. I do hope so.


Now, on a much lighter note, the berry report:

Blueberries were abundant, though a little watery tasting. 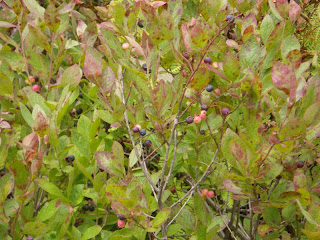 The blackberries were better, though not quite as abundant. I had trouble taking a photo of them, not because they wouldn't sit still, but because I kept eating them and thinking 'crap, I meant to take a photo of those berries I just ate.' 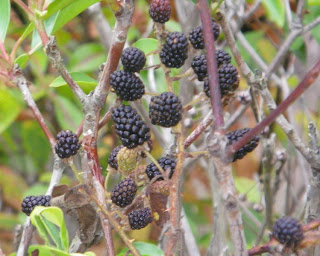 Posted by Bernard Brown at 7:03 PM No comments: