Back on Tuesday when I called Scott to propose a trip, it had taken me some effort to convince him the weather would justify driving anywhere to go herping. The weather during the week had been beautiful, spiking into the sunny high 70s and staying up in the high 50s and low 60s the rest of the week. They were calling for cooler weather over the weekend, however, and high 50s didn't sound so great after that spectacular week.

Either I’m pretty persuasive or it’s easy to talk Scott into a herping trip. After a couple minutes he agreed to head out. I was thinking we could go looking for spotted salamanders (Ambystoma maculatum) and spotted turtles (Clemmys guttata) in , but Scott suggested we could check out a spotted turtle spot in that he knew of.

We invited our wives, and so I felt a greater than usual sense of impending failure when I looked up at the gloomy, cloudy skies and felt the cold wind on my face as we climbed into Caroline’s truck. I swore that the United States National Oceanic and Atmospheric Administration had predicted sunny weather as we headed off into , but no one seemed to care - forecasts are nice, but they don't bring out the sun.

We got to the park to which Scott and Caroline make turtling pilgrimages each May, and the sky was still gray. I pointed out that I could see my shadow, meaning that the clouds were thinning, but it didn’t seem to buy me any credibility.

The clouds did finally break as we neared the first of our target ponds, and any doubts about our federal government meteorologists’ competency flew away as Jen spotted a black racer (Coluber c. constrictor) basking next to the trail. Scott grabbed it, and it stayed calm enough for photos. That’s Scott and Caroline on the left with Jen on the right. 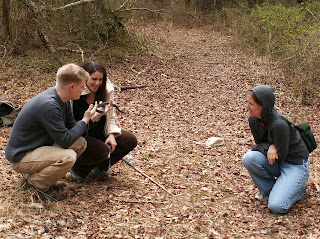 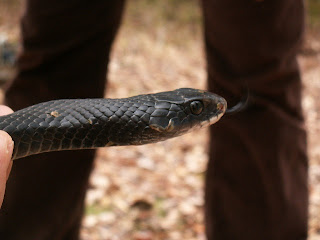 Note the snake’s blisters. When you see these in captive snakes they’re usually a result of excessive moisture. They can be deadly if they aren’t treated right away and if the snake’s terrarium isn’t dried out. In the wild you see them pretty often in snakes just emerging from hibernation, though. I figure the blisters result from a particularly moist hibernaculum (hibernation den), and that they go away once the snake is up and moving around in the spring.

Scott hadn’t even finished explaining that we’d be looking for the spotted turtles swimming in the shallows when he zeroed in on something and plucked it out of the water near the shore. 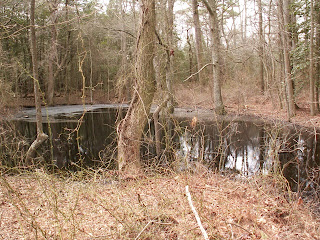 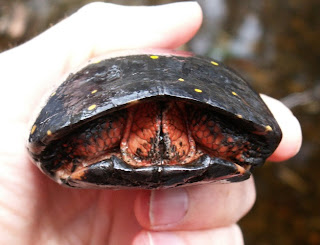 How’s that for cute? This girl wouldn’t stick her head out for photos, but that didn’t stop Jen from having a conversation with her before we let her go. 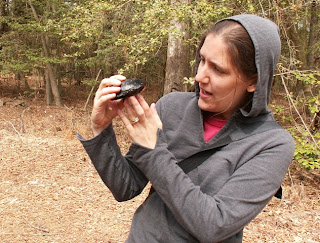 These are the turtles David Carroll is in love with, and rightly so. Carroll recently won a MacArthur fellowship for his work painting, writing, and educating people about spotted turtles and other wetland creatures. His masterpiece, The Year of the Turtle, is a beautiful account of a year in a spotted turtle community.

We looked under logs around the pond and turned up a bunch of redback salamanders (Plethodon cinereus). About half of them were babies, about one inch long. I don’t take quite so many photos of redbacks anymore, but these guys were adorable. 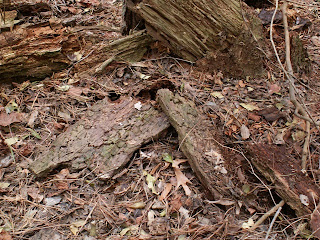 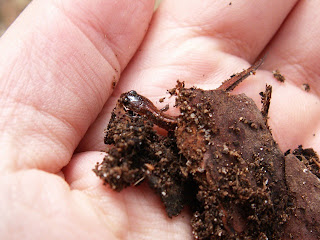 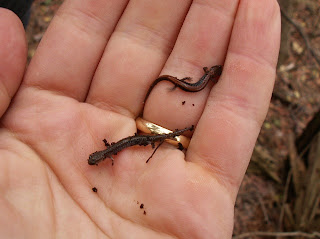 We pulled out a couple more spotted turtles from a nearby pond, both females as far as I could tell. 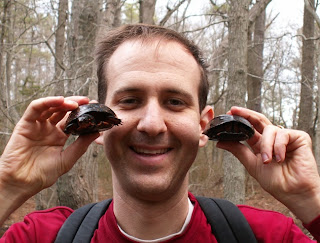 This one did come out for some pretty pictures. Note the orange coloration on her upper
jaw/lip. Male spotted turtles usually have dark upper lips. 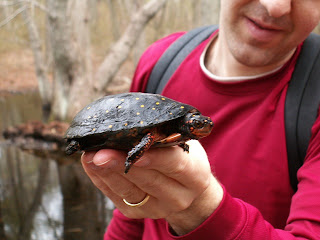 We then headed out walking along a trail. Scott was walking out in front, and before I could see what he had seen he was jumping on something at the edge of the trail. 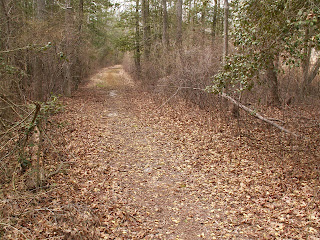 Here it is: Thamnophis sauritus, the eastern ribbon snake. This is a close relative of the common garter snake (Thamnophis sirtalis) but is more of a frog and tadpole specialist and sticks closer to aquatic habitat. 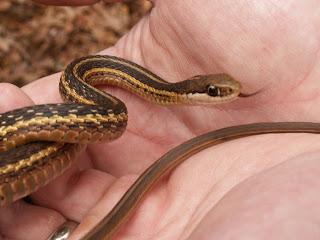 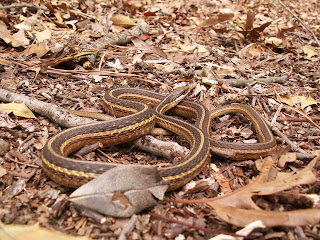 We wound up back at the first pond to check it out one last time before we headed home. I
waded out into the water so I could search the shallows without tripping around the thorny vines along the shore. I still hadn’t found any spotted turtles myself, and I while I was delighted to have seen the others, I wanted to grab one myself.

Finally, though, I saw what looked like two constellations moving over the leaves. The black background of the shells blended in with the dark bottom of the pond, but the bright yellow and
orange spots stood out like little stars against the black.

Here are a few photos of them in my hand as I was trying to juggle them to get good photos. That's the male with his legs stuck out. Note the dark coloration on his upper jaw. 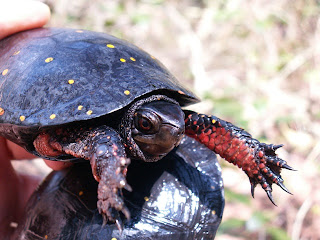 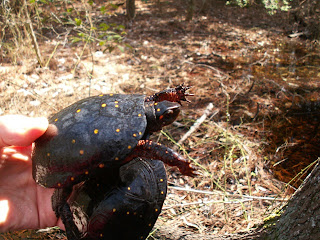 I wanted to take photos of their bellies to show the difference between the sexes, and of their backs to have records to ID them by later (Spotted turtles’ spot patterns are unique, like fingerprints.). After a minute of fumbling I figured out I could stick one at a time in my pocket to get the pictures I wanted.

Here are their bellies. First is the male with the concave plastron (bottom shell) and the relatively long and thick tail. 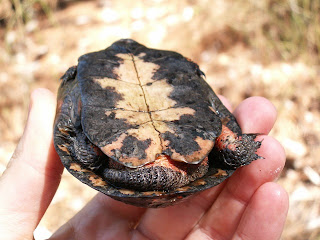 This is the female. Note the flatter plastron and smaller tail. 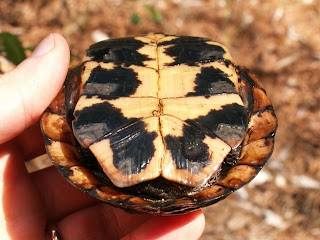 Last, here’s the release photo. Scott had walked over to check them out, and we both got a laugh to see the female take off and the male pick up the pursuit again. 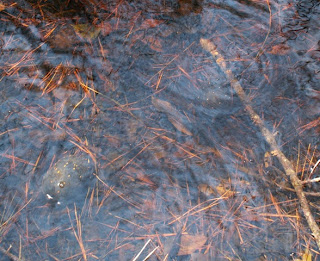 The temperatures made it up into the mid 50s and the skies were partly cloudy.

Posted by Bernard Brown at 7:04 PM No comments: