On Sunday I finally did something about the fact that Magnolia had never met a timber rattlesnake (Crotalus horridus). I realize that sentence could look alarming to a non-herper, and I mean it in a very safe sense: Magnolia would 'meet' a rattlesnake at a distance of several yards, well above the ground from the safety of a baby carrier strapped to my chest. Nonetheless I wanted to get my new favorite person in the world out into one of my favorite habitats with some of my favorite creatures. Even if we struck out we'd be enjoying the sunshine, fresh air, and new sounds and textures of the woods on top of a mountain.

I also was interested in testing the concept of taking the baby out on a mountain hike. I figured it couldn't be much harder than slogging through a marsh with the mud sucking back on my hip waders, but still I had some questions about balance and endurance while climbing and hiking.

I'll admit to more caution than I usually display on these trips. I was less willing to be surprised by a rattler coiled a few feet away, and so avoided brushier sections of forest floor. Hopping from boulder gave way to more careful stepping, and precarious short cuts to more-deliberately picked routes.

And of course I got a late start. The general challenges of preparing a baby for a long car ride followed by a hike were compounded by the clear and sunny weather on Sunday. Rattlers tend not to linger in the sun if they can warm up quickly, so that they are most easily observed in hazy or even cloudy conditions. Strong sun means that they can heat up in a few minutes and then retreat out of sight, making it harder to spot them compared to cloudier conditions in which they might spend hours out in plain view.

Thus I excuse the poor results. We saw one rattler in a spot I could have seen at least five in better weather, but I'll take it. Any rattler is a magical beast,with a commanding presence and heavy grace. This one buzzed at us from the middle of the path ahead as I came down off a slab where we had spent a few minutes hanging out (and changing a diaper). 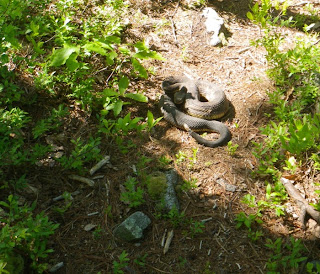 At first I thought we had startled it as it had been crossing the path. I took a few photos and backed off, waiting for the snake to move. It did not. I gave it a little more time, but it stayed put, buzzing each time I moved. Finally I picked a long detour around its position and starting looking elsewhere. Still it sat in the middle of the path, now in a more comfortably relaxed coil. 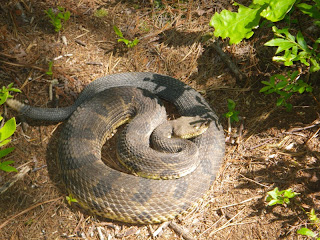 I wondered at that point if it hadn't been crossing the path at all, but rather setting up to bask when we had walked up on it. Sure enough it was still there a few minutes later, soaking up the sun. 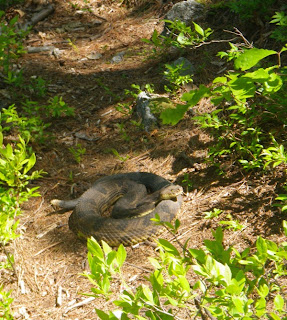 The buzzing that I had had interpreted as pure fear now seemed more like a wary, angry message, 'get the hell off my lawn!'

With that, and a growing ache from my lower back, I decided to head for the car a few miles away. On route we saw one of Pennsylvania's omnipresent pickerel frogs (Lithobates palustris) hop into a seasonal puddle. 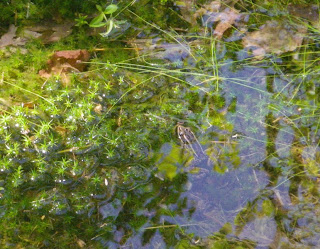 I'm not sure what tadpoles these might be, maybe wood frog (Lithobates sylvatica)? 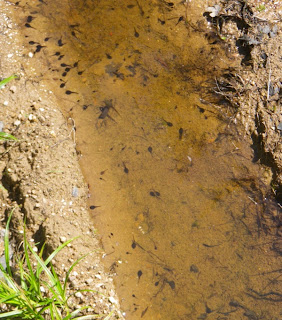 Posted by Bernard Brown at 6:05 PM No comments: