Snorkeling in the Delaware has got me thinking about snorkeling in the Schuylkill. Most Philadelphians will shudder at the thought of letting the murky waters of the river that separates West Philly from the rest of the city come in contact with their skin, but water quality is an empirical matter. It is testable and quantifiable, and, based on such monitoring, our fair Schuylkill is objectively cleaner than most of us think. Some people even go swimming in the Schuylkill, so I figure snorkeling should be no big thing.

This morning, after an unpleasant interaction with Philadelphia City Recreation Department employees at a pool where I had intended to go swimming (not relevant, except that I felt pissed off and needed a herping fix), I rode up MLK Drive to the Falls Bridge to check below for turtles.

I had seen red-eared sliders (Trachemys scripta elegans) basking down there before, and this time I saw some more turtles - one of which was surely a slider, and a few of which just might have been map turtles (Graptemys geographica). Maybe that's wishful thinking, but I think worth an empirical test of my own sometime in the future.

On my way back home, I decided to check out a rocky area around the railroad bridges just downstream from the Roosevelt Boulevard bridge. I saw a small, juvenile turtle basking that dove, but a bigger turtle just sat there in a rocky shallow spot right next to a pileon by the bank. So I waded over and picked her up. (please excuse the slightly crappy phone camera shot) 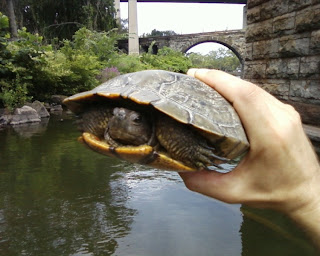 This turtle gave me the impression of being really old. She also smelled kind of funky - I'm wondering if she was under the weather, explaining her complacency as I approached to pick her up.

I guess I should be upset about her being an invasive species (we should be having red-bellies - Pseudemys rubriventris - basking down there), but it worked as a herping fix and made me feel less pissed off about the crappy customer service Philadelphians have to deal with from our public servants (I write that as a federal public servant who takes customer service seriously - enough ranting). Stay tuned for more Schuylkill turtling!
Posted by Bernard Brown at 10:01 AM No comments: