House of HERRRRRRRRRRRRRRRRRRRRPS!
Dig number 10, for which Seabrook outdid everyone with a long, intricate, rhyming faerie tale. It's so awesome I'm not sure how I can host this ever again without looking like a slacker. I'll give it a shot, but wow.
Posted by Bernard Brown at 1:56 PM No comments:

It can be hard to turn off the herping. If I go for a walk anywhere with even a remote possibility of producing critters, I pay attention to little else (blue sky, light breeze rustling the leaves that are starting to turn yellow, brown, and orange). Yesterday I was doing pretty well at focusing on the walk, a mid-afternoon pleasure stroll with Jen in the Poconos, where we had gone for an impromptu weekend getaway.
I admit to being under the weather (tough cold that had taken ownership of my lungs, running a fever the night before), so I wasn't going to get in a proper hike by my standards - the rock scrambling, bushwhacking that this season calls for; perhaps the light vertigo and aching back helped me avoid the temptation to flip rocks along the way.
Still I watched a stone wall along the trail as we walked, and I was soon rewarded by a well-camouflaged snake just peeking out of a gap in the wall. See it? 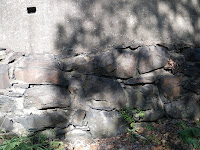 Here's a closer shot of the copperhead (Agkistrodon contortrix). I do love the grace and reserve of these snakes. They rely on their nearly perfect dead-leaf pattern for protection, usually freezing and holding still if you don't poke at them. This one retreated a little bit as I got closer, which was a nice signal for me to stop and finish shooting photos already.

On our return leg I was inspecting the wall again while walking sideways and looking forward - in other words not where I was stepping, and I'm sure I had just reminded Jen to be careful about the snakes that could be hiding in the dead leaves and light weeds, when I heard one of the most beautiful sounds in nature, the abrupt dry buzzing of a timber rattlesnake (Crotalus horridus)!
She was sitting maybe five feet away from me about halfway into the path (how the hell had I not seen her?). I gave her another yard of space, quickly pulled out the camera, and beckoned Jen over to look. This was a smallish yellow rattler - maybe two feet, maybe two-and-a-half.
The snake then unhurriedly kept crawling into the path. I've seen rattlers flee, scooting quickly off a perch and under a rock, and this snake wasn't doing that; it was taking its sweet time, tongue flicking as it went, until it ended up a few feet into the leaves and weeds on the other side. This is where the snake started poking around the leaves more earnestly and then started a U-turn. Was it going to re-cross the path? What the hell was this snake thinking? 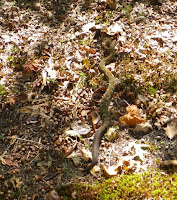 Nap time! That's what she was thinking. This perfect little yellow rattler drew itself up into a tight little coil and settled in. See her? This is the up and the down side to having timber rattlers around a trail. I'll bet that no one walking past this snake in the leaves sees it - great for the snake (and usually for the people - it is far more dangerous to try to interact with a venomous snake than to let it be), but a good reason to watch your step very closely if you walk off the trail in rattler country.

Here's a closer shot of the little sleeping beauty. 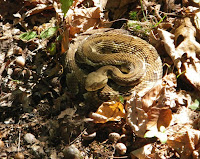 Posted by Bernard Brown at 1:48 PM No comments: