With all due respect to the birders, who experience their quarry in one, maybe two senses, nothing wipes away the winter duldrums like holding a spotted turtle (Clemmys guttata) in my hand. I relish the solid wieght of a healthy turtle, I love the hard shell - polished smooth in the old-timers, rough for the youngsters - and, I always take time to feel (fondle?) the softer, scaley feet tipped with pointy but not quite sharp claws. I might be going off the naturalist deep end here, but I feel some kind of connection, hand to foot, analogue-to-analogue, even at hundreds of millions of years of evolutionary distance.

Of course while I think of it as a meaning-laden handshake from the world's cutest creature, the turtle thinks of it as a panicked attempt to get the hell away from this giant monster and back in the water and weeds where it can safely get back to whatever I so rudely interrupted.

What I interrupted for these three was probably pretty heated, at least in spotted turtle terms. The three turtles were arranged in an equilateral triangle, all facing the same direction in a watery space amid sedges and cattails, the female in the lead, the two males close behind her. Imagine a party, where an attractive young woman is trying to get in line for the keg while two guys both put the moves on her, maybe even trying to shove each other out of the way. Suddenly a giant hand reaches through the window and grabs all three a few stories up into the air. 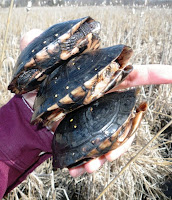 Here's one more shot of the female that shows the landscape a bit better in the background. 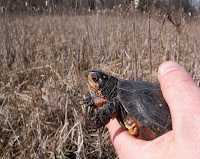 Here's another female I found elsewhere (near where I had earlier seen a spottie slide into the water and slip out of reach beneath a submerged lip of tree roots. I groped after it for a few dozen seconds of 38-degree pain but came up empty handed), smoother shell indicating her seniority, and bearing the scars of a long-past encounter of something with teeth on her carapace... 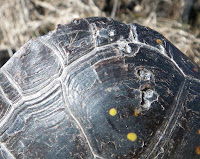 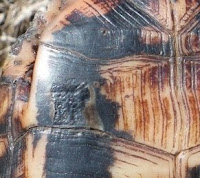 Spotted turtles aren't the only thing swimming around the marsh wookin pa nub. I saw a couple red-spotted newts (Nopthalmus viridiscens) perusing the weedy shallows, walking/swimming forward a few body lengths and then weaving down among the matted dead grasses and leaves at the bottom before popping up again. 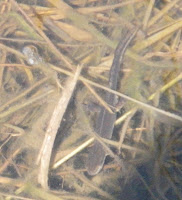 Here's a male, in the newt-equivalent of breeding plumage (really hard to portray this in the air - I need to bring along a transparent container to get a good shot). Check out the strongly keeled tail and, in the second photo the swollen vent (you can just see it behind the rear leg on the left). 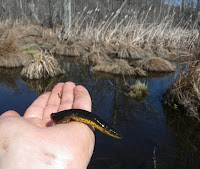 I think I heard one or two wood frogs (Rana sylvatica) chuckling away, shouted down by the peepers. The woodies' work was apparent in deeper marsh pools - blobby egg masses soon to hatch out into tadpoles. 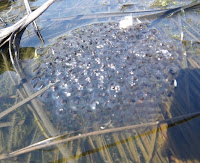 As tired as I get of the painted turtles (Chrysemys picta) it would be unrepresentative to leave them out of the trip account. I walked around a pond set in the marsh and heard dozens go skitter-splash as they got back to the safety of the water, though some stopped and tried to hide in the shallows where I could still get to them. 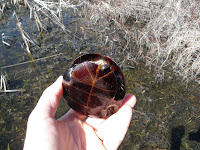 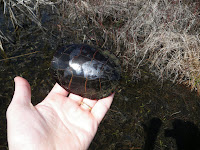 Posted by Bernard Brown at 5:50 PM No comments: