January, the Second-Cruelest Month (or, even the redbacks are holding out on me)

I found nothing today, nada. This isn't entirely surprising. The sun is out and the temperature outside in Philadelphia is in the mid-40s, and that isn't much for creatures that can't produce their own heat. Still I had had such high hopes. I have found redback salamanders (Plethodon cinereus) in the 40s before, and I had hoped to find one or two today to make myself feel better. 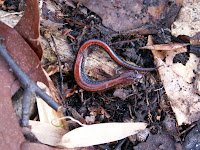 January is the second-cruelest month. I read in the Inquirer last week that the second half of this month is historically the coldest period of the year, and the first half was dominated by a wicked cold snap, with day after day sticking stubbornly below freezing. We've still got snow piles from December:

Sure we're in the middle of a warm spell, but for the most part the nights have still dropped below freezing. We still have brutal February to go, cruelest for coming after our January has already half-crushed our herping will.

I had the afternoon off because this morning I had some oral surgery. I would have been fully justified to spend the day on the sofa reading or watching movies; my mouth was thoroughly numbed for the procedure (a good thing judging by all the tugging, scraping, and sewing I could still feel), but by mid-day sensation had returned to my gums, and it wasn't good.

So I did whatever I do when I need to cheer myself up: I went herping. I headed for the Woodlands Cemetery, maybe a poorer choice than the Mt. Moriah Cemetery, but I could walk to the Woodlands, and I'd have to get on my bike for Mt. Moriah. I might look absurd walking through West Philly holding an ice pack to my lower lip, but at least I can pull it off; riding my bike like that is a step more awkward than I'm willing to try right now. (I type this now with the aid of a belt tied around my head supporting the ice pack - not a road worthy contraption)

Redback salamanders are the most common vertebrates in the Northeast. They're active in cool weather, and close to the surface in cooler weather, so if I'm going to find any critters in West Philly in January, they're it.

Give me a few more nights above freezing and I'm pretty sure I'd have found one, but the ground was still frozen just under the surface, an indication to me that the redbacks would be a little deeper than I could reach. Dig the frost under this otherwise suitable chunk of log: 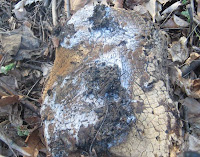 I did find some life under other pieces, but all of it invertebrate. I lifted my favorite board in the entire cemetery, one that's hidden brown snakes (Storeria dekayi) in kinder weather as well as redbacks, but found just worms, grubs, slugs, beetles, millipedes, and centipedes - lots of centipedes.

I have an uneasy relationship with these centipedes, kind of like someone you don't like to talk to but who shows up at the same parties you do. They catch my eye in a similar way to how little salamanders do (and then there was a scary, late-night encounter I had with one of their much larger cousins in Mexico when I was in college that left me with a grudge). These days I say hi, and that's about it.

All those invertebrates made me wonder if there were redbacks to be found that I just hadn't. Maybe they were avoiding me, revenge for all the disparaging remarks I've made about them - cute and pretty, yes, but in fall and spring so abundant as to be annoying. I hope they don't read this blog; they'd get the impression that I only really love them when no one else is around. I'd hide too.