In college I remember discussions of whether one can observe something without altering it. Could you observe human behavior without the subjects noticing you and changing self-consciously? Could reporters cover a story without affecting it? Back then these were theoretical conversations about social phenomena and I found them quite interesting, even if they didn’t relate directly to anything I was actually doing.

I certainly didn’t imagine how relevant those questions would be to herping. We always face questions of whether handling a herp stresses it or scares it away from a crucial basking spot or hibernation spot (for example there’s apparently some evidence that handling rattlesnakes near den sites scares them away the next year), and judging by discussions on the herping forums, there are strong opinions on both sides.

A variation on this theme involves how capturing a critter might damage its environment. In most cases we can put the rock or log back how we found it, but it’s hard to put bark back on a dead pine tree after you’ve peeled it off to find snakes hiding underneath. Some delinquent herpers out West go so far as to use crowbars and chisels to break into the cracks in boulders and outcroppings in which mountain king snakes (Lampropeltis species) hide.

At the end of October I lifted an old door and a nearby piece of wood to find dozens of brown snakes (Storeria d. dekayi) getting ready to hibernate. At the time I worried that I might have disturbed them so that they’d flee to a less suitable hibernation spot (hibernaculum) or that I might have been unable to get the door back down exactly how it had rested on the ground before, possibly ruining it as a shield against the winter cold.

I resisted going back after that, even during our oddly warm November and December. I wondered whether the snakes had sought a hibernaculum deeper in the ground during our frigid January and February, but I kept my hands off.

This weekend, though, with the hard freezes likely behind us, I had to go back to check.

I had been thinking of getting my camera and thermometer and making it a proper outing, but Jen and I found ourselves in the area on Sunday, and we decided to stop.

We headed straight for the door, and I told Jen to get close and prepare herself to see what was underneath. I crouched down, lifted, and right there in front of us were a whole bunch of brown snakes, all of them dead. I counted twenty-two.

I stared for a moment and then dropped the door. Jen walked off to look around some more, and I checked the other nearby piece of cover where I had found them in October I was immensely relieved to see no snakes at all, including corpses.

I was thinking we might as well get back in the car and drive home when Jen started shouting. I ran over to see what it was, and there, a few inches down in the ground where Jen had just flipped an old railroad tie, was a mass of brown snakes.

At first we thought they were dead too, but a couple near the edges perked up and started crawling away – they must have been catching some of the warmth at the edge. Little by little we saw others moving slowly, and we realized that most were alive. I took a picture with my cell phone camera, and we talked about what to do next. 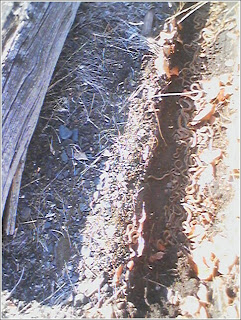 We wanted to leave them more or less how we had found them: hiding securely underneath a railroad tie. Replacing the tie and tamping it back down into the ground seemed a little risky, though; we didn’t want to crush the snakes. So, we decided to follow the standard drill: remove critters, replace cover, and release critters next to cover so they can get back underneath on their own.

Jen grabbed a flat board, and I started scooping them out onto the board. Most were stiff and cold to the touch. I would have assumed these were dead, but each time I handled one long enough to examine it, the warmth from my hand woke it up. About ten were obviously dead, with fuzzy mold or large black spots, but most were alive – close to dead, maybe, but not all the way there. Young brown snakes far outnumbered adults – about half looked to be less than a year old, another quarter looked a little older, and I’d call the rest adults.

As soon as they were all out of the way, I set the tie back into its hole. We discussed how to release them. The more active of the bunch quickly started burrowing back under the tie, so I figured the rest would follow as soon as they’d warmed up enough to move. Jen counted as we placed them next to the tie, and we separated out the dead ones as we went. I did my best to warm them up a little in my hands or leave them on the sunny side so they’d be alert enough to burrow back under. Most did just that, and we left when there were only a few left on the surface we covered them with a little dead grass so they wouldn’t be too obvious for birds flying by.

The total, including the dead, was 85. I'll point out that this probably isn't a record, but it's still a lot.

In a way I’m relieved some of them were dead. I know that sounds kind of sick, but if snakes had died in that undisturbed hibernaculum, maybe the others’ deaths were not my fault. Of course that’s pretty selfish now that I read it again, but the door had struck me as a flimsy barrier against the cold from the beginning, and maybe they would have died even if I hadn’t uncovered them back in October.

Or maybe not. It’s impossible to say, to go back in time and run some kind of controlled experiment where in the control I don’t lift up that door.

I guess to put this all in perspective, brown snakes are incredibly common snakes around Philadelphia, and there are probably dozens of hibernacula just like that one in the surrounding acres, including in some of the nearby lots (where, incidentally, I haven’t found any snakes, though I’m sure they’re back there somewhere) that are now bulldozed and apparently are under construction.