I think I’m going to break last weekend's trip into three sections. We spent about a couple days up in the mountains with Scott, Caroline, and their new baby Miles, and Scott, Jen, and I spent plenty of time herping while we were up there.

Part One: The Board Line

That might be a little bit of a misnomer since they weren’t in a line and not all of the objects were boards, but in herping lingo “board line” has come to mean any purposefully-arranged assortment of artificial flat surface objects. They can be in vacant lots, they can be in the middle of the wilderness, but the idea is to provide an ideal hiding place for herps that you can easily access. Sometimes this is done quite scientifically. By that I mean board lines are often part of biological surveys. If you ask herpetologists to find out what herps live in an area, they might try laying out some carefully-selected boards and sheet metal (roofing tin works well) and see what turns up underneath.

Amateur herpers (and professional collectors for that matter) sometimes do the same thing. You can go to a construction site, ask them for discarded plywood, and drop it out in the woods as a board line. Of course that’s illegal dumping if you do it on public land or someone else’s private land, so rest assured I haven’t done it. What we amateur herpers do much more often is find an existing illegal dump site or collapsed building and spread the flat trash around so it works as a board line. Illegal trash dumpers are usually in a hurry. They drop it all in a pile, and drive away, when it would attract much more spread out. We merely improve poorly-arranged trash deposits. We should probably keep track of these impromptu board lines, but most often we improve a dump site figuring it’ll be better the next time we wander across it again.

So what exactly does “improve” mean? No one board can be perfect in all circumstances, so a good board line has a variety of boards in a variety of positions. In cool weather the roofing tin might get warmer than the wood and be more productive. In warmer weather, that tin might get too hot, and a sheet of plywood in partial shade (or a few carefully stacked sheets to allow a vertical thermal gradient) might yield more. In some cases a roll of carpet can work wonders. There are some constants. For example, rodent burrows underneath a board make it more attractive for large snakes that eat rodents. Snakes also like those burrows as escape holes. The snake has the option of sheltering underground or catching the heat of the sun off the bottom of the board. It can move back and forth without exposing itself to hawks. Boards also work only where snakes wander past. A board in the middle of a golf course won’t catch much, while a board at the edge of a clearing in the forest might work out pretty well. Board lines also improve with time. It can take months or years for the local snakes to get comfortable with the boards or for baby snakes to grow up with them as a nice neighborhood amenity.

I am far from an expert in board lines. Some herpers have spent decades tending board lines, and they spend days in good weather going from board line to board line, finding heaps of kingsnakes (Lampropeltis species), rattle snakes (Crotalus species), copperheads (Agkistrodon contortrix), and so on. Check out ’s photos on the Black Kingsnake website for the work of a master (http://www.blackkingsnake.com/Habitat/Index.htm).

Scott improved a site up near his place in north-central PA. He took advantage of a couple abandoned, decaying truck trailers in a meadow. He spread out the plywood and flat pieces of metal falling off the trailers and has been finding eastern milksnakes (Lampropeltis t. triangulum) under those boards ever since.

Once I got home I kicked myself for not taking a decent photo of the boardline we checked both mornings up there (September 8th and 9th), but I’ll make sure to snap some good ones the next time we’re up there. I need to take more habitat shots in general, but in this case it's especially negligent.

You might notice I've written about eastern milksnakes before. They keep drawing me up to Northwest Philly to search the and nearby Roxborough, Manayunk, and . I saw one absolutely gorgeous yearling there a couple years ago, and ever since I’ve been trying to find more. I keep failing, and I keep going back.

They’re a little easier to find in a meadow surrounded by thousands of square miles of great habitat – a patchwork mix of forested hills and farms. We found them both days we checked. Here’s the first, a female Scott flipped.

I had just caught a black racer (Coluber c. constrictor). I’m so used to them being all over the Barrens that I didn’t think much of it until Scott told me they’re uncommon where we were. We put it back, and Scott promptly uncovered a female. She was looking a tad thin, and we figured she was still working on getting her weight back up after laying eggs a few months ago. Doesn't she have a pretty pattern on her head? 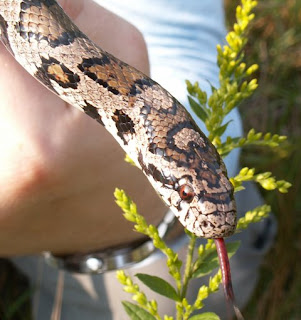 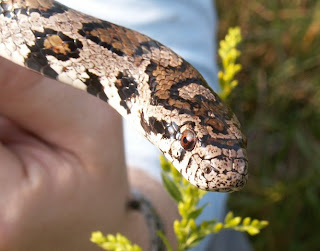 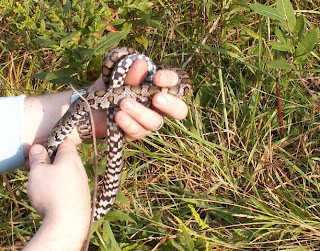 You can see that these are not strikingly beautiful snakes. Their babies are, with the saddles and blotches crimson or scarlet and the background light gray or cream. As they grow, however, they get more and more drab. I guess they blend in better with leaf litter and dry grass this way. I still think they’re impressive snakes, however. ‘Handsome’ might be a good word for them.

The next morning we brought Jen, and we found two ring neck snakes (Diadophis punctatus edwardsii) along with two milksnakes – a fabulous 10 minutes of herping. Here she is posing with the female, who was getting ready to shed. 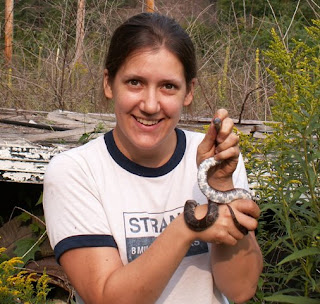 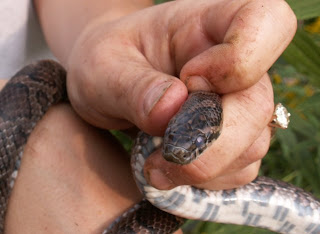 Here’s the male, who just would not stay still enough for a decent photo. I hope you can tell that he was a big, imposing milk snake with about as nice a pattern as you’ll find on the adults. 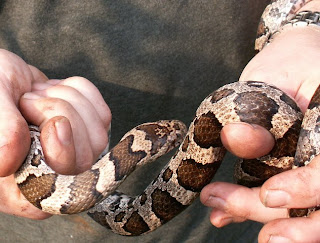 In case you’re wondering, they get their name from an old myth that they suck milk from cows’ udders. That’s udder nonsense, of course; they hang around barns because of the rodents attracted to all the cow feed.

Here’s one of those two ring neck snakes. Guess how they get their name. 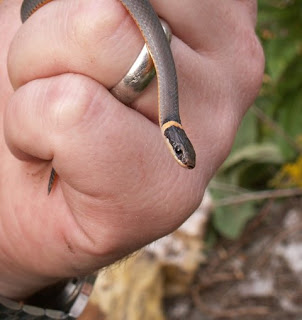 In part two I’ll cover a trip to a on which we found no rattle snakes but still had a good time.

Posted by Bernard Brown at 4:08 PM No comments: