Still leery of this whole winter salamandering idea? I admit I was too. Part of my problem is that I don’t know too many vernal pools, and I certainly don’t know if any within half an hour of my apartment. I keep meaning to drive over to South Jersey and visit some possibilities, but I haven’t had the time yet.

I did have time to visit the Wissahickon Valley section of Fairmont Park on Sunday (December 18, 2005) afternoon, though. The sky was sunny and the temperature was somewhere around 40 degrees. The stubborn three inches of snow that had stuck around since the last snow storm had been melting for a few days, so the sun had had a chance to warm the ground a little.

We started with a streambed in which we’ve found two-lined salamanders (Eurycea bislineata) and longtailed salamanders (Eurycea longicaudia longicaudia). We tried a lot of rocks and found nothing, not even the worms and other invertebrates that usually hang out under rocks in streambeds. We gave up and walked around a little. It was a beautiful day to wander around in the woods.

On our way back down towards Forbidden Drive and the parking lot, we decided to work a southwest-facing hillside next to the path. Almost all the snow was gone, but in this picture you can see a few patches. 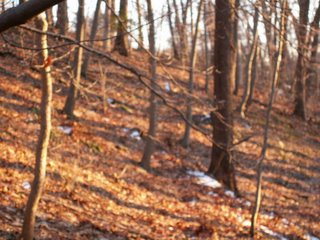 The photo is blurry, but it serves to emphasize that it was not all that warm out. Still, this was the warmest patch in the woods just then, so we gave it a shot.

The hillside was littered with flat rocks, and we focused our efforts on flipping them over, and, of course, putting them back how we had found them. We saw lots of beetles, roaches, and some centipedes – all encouraging. We worked up and up, keeping our eyes on the shadow of the opposite hill rising to overtake us as the sun set. After ten minutes Jen shouted that she had found something, and I ran across the slope to see.

It was a redback salamander (Plethodon cinereus)! 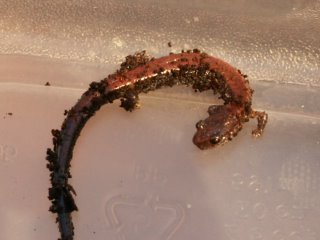 It was slow and groggy, all understandable given the temperature. We hassled it for a couple shots before returning it to its rock, which you can see in this photo. 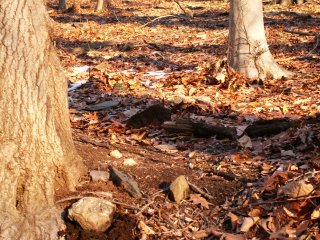 We kept looking for twenty minutes, but gave up once the sun had fallen out of sight and the shadow had completely covered the slope. It was only one salamander in an hour of looking in perfect habitat, but it was my first winter salamander.
Posted by Bernard Brown at 6:30 PM No comments:

Yesterday (December 17, 2005) I went out to check for salamanders in a Philadelphia city park. I found nothing. This was not entirely a surprise; the temperature was in the low 40s, and the ground had been covered with snow a couple days before. The salamanders I was looking for are redbacks (Plethodon cinereus), and I haven’t read many accounts of finding them in winter.

Other species are active in winter, such as the ambystomids (remember the marbled salamander (Ambystoma opacum)) actually breed in the winter or on cold fall or spring days. Many stream salamanders remain findable if not exactly highly active during the winter, and I’ve read on the herping forums that one can find them if one looks.

Here is where I found nothing – a steep incline where I’ve found redbacks on cool, but not cold, spring and fall days. Here is an action shot of a redback I found in the spring at Valley Forge. 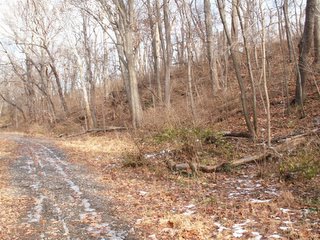 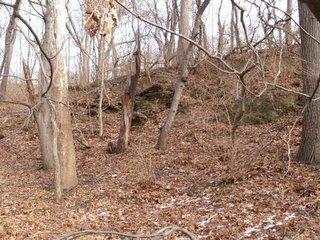 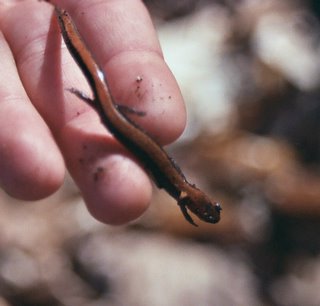 I am going to be going winter salamandering this winter. Winter is not highly rated for herping, but, as the sage said, herp activity records often reflect the activity patterns of herpetologists rather than herps. You’ve heard that line, haven’t you? So in the next few months I’ll be looking for critters on days that really don’t look like they should be good days for the critters. Wish me luck.
Posted by Bernard Brown at 7:50 PM No comments: