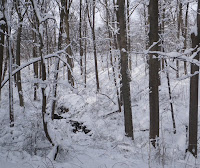 Another weekend, another herping expedition. January 29th? The coldest time of the year? 25 degrees? Of course!

I thought I might try a spring house in the Wissahickon Valley, Philadelphia, PA, next to which I had turned up a long-tailed salamander (Eurycea longicauda)a couple years ago. Here is a long-tail from elsewhere, in Berks County, PA, a blurry shot of a really pretty one (which is worse, a nice shot of a mediocre specimen, or a bad shot of a real looker? Probably the latter for demonstrating the missed opportunity): 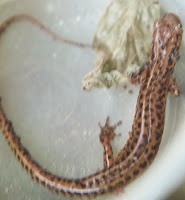 I hiked up to the point on the trail where I had to cut off for the spring house (thinking up to that point 'this is not that bad') and then waded into the snow.

Of course the spring house was locked (couldn't get past the Master Lock on the bolt) so I didn't have a shot at any adults, but I did dip out some water from the pool just below the spring house, full of watercress in the thawed times, and came up with some larval salamanders. Here are five of them. 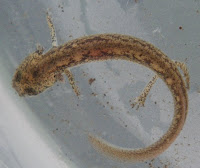 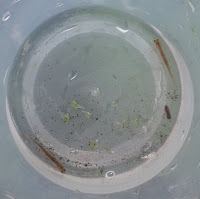 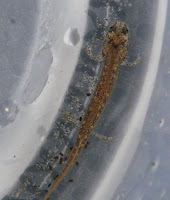 Of course all turned out to be baby two-lines (Eurycea bislineata). Note the two rows of light spots down the backs of the little critters; long-tails would be generally mottled without those spots.
Posted by Bernard Brown at 12:44 PM 1 comment:

In retrospect I've been a big wimp lately. Like most of the herpers in the northern three quarters of the United States I've been crying in my beer (literally - Scott and I got together for a mid-winter herper's consolatory drinking session last week) through these long nights and frigid days.

It took a Field Herp Forum post by Kyle "Balls of Thermite" Louks to call me on it and get me out in the snow to herp. Kyle pointed out that as long as there is water flowing out of the ground, or seeping out of the ground at the heads of little streams back in the woods (a.k.a. seeps), there are amphibians to be found.

Seeps are interesting places even in warmer times when we have more options. Some attractive species, such as red salamanders (Pseudotriton ruber), seem to be seep specialists; they're found further down little streams and in soggy spots on the Coastal Plain (say in the Pine Barrens) as well, but you can most reliably find them in those wet spots back in the woods where the streams issue from the hills. Seeps are sort of gateways to a subterranean world that I only realized was there about a year ago when I read accounts of how long-tailed salamanders (Eurycea longicauda) breed back in the cracks in the ground, deeper into the springs. (Interestingly, though we can usually go no further than the ground, our predecessors in the days before refrigeration built convenient gateways for us in the form of spring houses, little buildings taking advantage of the consistently cold spring water. No one has used these to keep the cheese from going bad for a long time, but they can make for interesting herping.)

Having been thoroughly called out by Kyle, it was time for me to find some wet water (frozen water abounds right now) and start looking for salamanders. I thought of some streams up in the Wissahickon Valley where I find long-tails, as well as some streams in the suburbs where I could flip reds, but I wanted to stay close to home, and I didn't want to be too pissed off at the time it took to get somewhere if I struck out. So, I tried out a small stream in Fairmount Park an easy bike ride from my apartment.

The thermometer read about 25 degrees when I headed out, which still strikes me as utterly absurd (it was even more so at the time with the stiff crosswind), but I rode on into the park, more hungry for a find than I was numb. 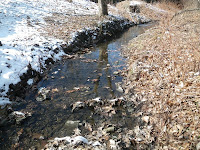 I considered more thoroughly scouting the stream once I got to it, but it was too cold to play around. Look at my poor bike in the snow! 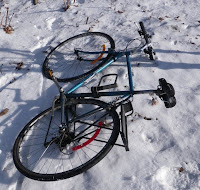 In warm weather you might get wet flipping rocks in a stream bed, but it's no bid deal. So what if your socks are a little damp for the hike home? This time, though, I stepped much more carefully around the water and hugged the banks. I very much did not want to take my gloves off, but I decided that was better than riding home with wet gloves icing up around my fingers.

I picked up one rock to reveal the all-too-common and all-too-frustrating sight of silt stirred up, blocking anything that might have been hiding under there. I waited for the water to clear up, but there was nothing but gravel.

My eyes fell on a couple flat rocks presumably warmed by the sun, frankly where I would be if I were a salamander in that stream. 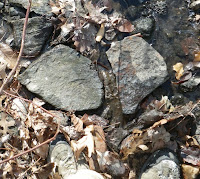 ...and sure enough, the first one I tried revealed this little two-lined salamander (Eurycea bislineata): 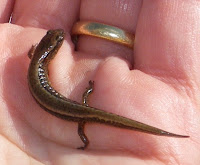 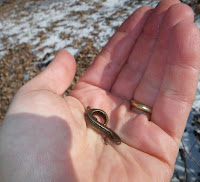 Two-lines are hardy little salamanders, hanging on in degraded streams where few other amphibians remain. I remember some macroinvertebrate sampling I did in Baltimore where we turned up two-lines, and studies I've been reading, looking at how amphibian diversity declines as impermeability (pavement) increases, often show two-lines as the last survivors where the reds and duskies (Desmognathus species) can't hack it anymore.

I let the cold-groggy and bewildered salamander go back by its rock and headed home. It was cold.
Posted by Bernard Brown at 4:50 PM 1 comment: