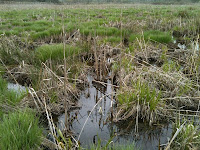 The past few weeks the weather has toyed with employed herpers like me. The weekends have been damp and cloudy, the weekdays sunny, blue-skied, and glorious, all perfectly visible to me out of my office window.

I had decided that this past Sunday was to be my day out in the wetlands, and though I saw the forecast cloud up, and then I woke up to see the clouds in the sky and feel the mid-40s air on my skin, I still decided to head out. What else was I going to do? When else was I going to go?

I figured that at least I could scout. There were some areas, particularly back in some flooded woods where small streams emptied out into the marsh, where Jen had found a spotted turtle (Clemmys guttata) last spring, that I wanted to explore. 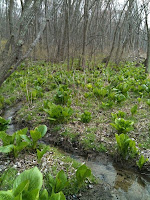 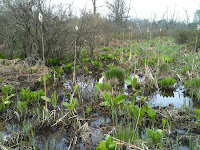 I actually found a snake in one of those streams. 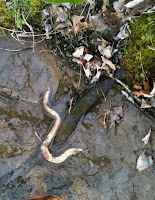 Rather it was dead, and there was only half of it. It was a northern watersnake (Nerodia sipedon), and I assume something (maybe a hawk sitting on a branch above?) was eating it before it got dropped in the stream.

Under rocks in another stream I turned up some two-lined salamanders (Eurycea bislineata). 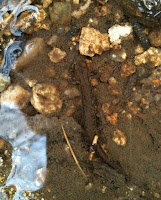 Little splashes and ripples in the pools of water where fallen trees' roots used to be gave away pickerel frogs (Lithobates palustris). Here's a crappy photo of a frog hiding back under the roots. (I forgot my camera and was stuck using my phone, and for reasons I can't understand, Blogger is inverting a lot of these photos I thought I had properly rotated)

Red-spotted newts (Notophthalmus viridiscens) were hovering in shallow water. I actually scooped this one out with the tines of my potato rake - one of those ridiculous whimsical herping urges you have, like, 'I bet I can't catch a newt with my potato rake.' 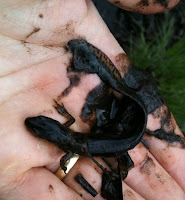 Tadpoles of either wood frogs (Lithobates sylvatica) or spring peepers (Pseudacris crucifer - I'm betting peeper; they were pretty tiny) were massed in a large puddle next to a pond. If we get a normal amount of rain this spring they could make it; if the spring continues as dry they might not. 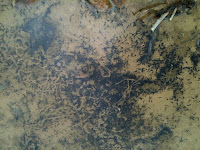 I should note that I slogged around for three and a half hours like that. Frankly it felt good to be back in my waders and yanking them out of the mud with every step, wrestling with the briars and studying the mud and water for (however unlikely - cloudy? chilly?) the shifting yellow stars of a turtle's spots.

And what do you know? I saw them. I saw two sets of them, in fact, a male with his nose just at the back end of a female.

Here they are in hand, upside down (thank you Blogger), unfortunately, but still beautiful to behold, and beautiful to hold too - the tactile pleasure of holding the elegantly rounded, solid shells of the turtles in hand is as addicting as the sight of them. 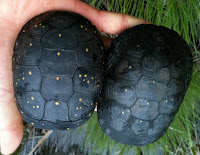 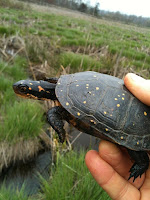 The female was particularly gutsy, quick to come out of her shell, and not retreating very far once I had put her back down. She stopped and watched me for a few moments while I ogled her suitor.

Is anything more beautiful? The yellow spots on the black shell, the orange blaze on her neck? Those big, liquid eyes?

A couple minutes later I kicked a third turtle. This was an accident, I was slogging along and the tip of my wader's boot hit something solid under the overhanging lip of a sedge. It didn't feel like a stick (I kick lots of sticks), and it wasn't a rock (I kick lots of rocks too).

The third turtle in fifteen minutes, it was proof that even if the weather isn't 'right,' we need to go out.
Posted by Bernard Brown at 6:54 PM 2 comments: