Last weekend I was invited to lead a herping walk with Master Naturalist students at the Schuylkill Center for EnvironmentalEducation. I think this is a fabulous idea: an opportunity for nature-interested folks to round out their knowledge of the natural world.

The property is covered with wonderful milk snake microhabitat (taking as given that all of Northwest Philadelphia’s rocky hillsides are good general habitat). The class leader, Director of Education Virginia Ranly, pointed to the piles of wood chips and said their land manager often finds milk snakes (Lampropeltis triangulum) when he moves them. I sighed and knew that unless I spent all morning digging I probably wouldn’t find any. She also mentioned some ruins and rock piles that also host milks, and, most-tempting, black rat snakes (Pantherophis obsoleta).

Herpers quickly learn that there can be miles of distance between ‘often’ or even ‘all the time’ and ‘reliably’ when it comes to finding the critter we’re looking for. Locals will tell you they see milk snakes ‘all the time,’ and the herper will run out to check the spot and find none. When you actually ask what they mean by ‘all the time,’ i.e. on what proportion of trips do they actually see the critter, you realize why the herpers come up dry. Figure the land manager is out there on the property doing things that will turn up milk snakes pretty much every day. I’ll bet he sees a milk snake no more than once a week in the spring and early summer. If I saw a notable bird that often I would also refer to seeing it ‘all the time,’ but in practice that might boil down to dozens of hours of time per snake found.

Luckily you CAN reliably find many other species at the Center. You can start, for example, with the painted turtles (Chrysemys picta) that bask around the pond in the parking lot. If you get close to the edge of the pond, frogs and toads (green – Lithobates clamitans, pickerel – Lithobates palustris, American toads – Bufo americanus) will launch themselves into the water.

The green frogs won’t even bother to jump when you approach the human-made ponds along the trails. They just sit there like fat little frog statues while their tadpole offspring wriggle around the shallow water. 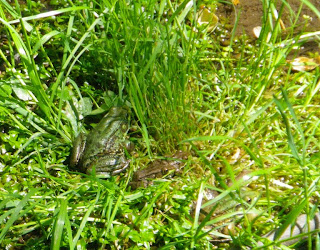 We found that it wasn’t too hard to turn up dusky salamanders (Desmognathus fuscus) and even larval two-lines (Eurycea bislineata) in the streams, newts (Notopthalmus viridiscens)  in one of the ponds, and of course red-backed salamanders (Plethodon cinereus) in the woods.

Somehow I forgot to photograph most of this.

I did remember to take a photo of a garter snake basking from between the rocks of the wall around the Center's greenhouse. 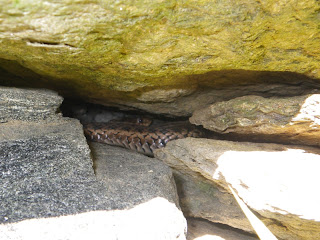 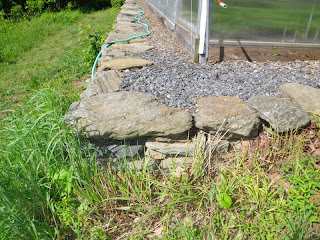 On the way there and back I made sure to spy on the turtles of the Manayunk Canal. As usual most were the out-of-place red-eared sliders (Trachemys scripta),descendents of released pets, but I am pretty sure most of these guys are our native red-bellies (Pseudemys rubriventris). 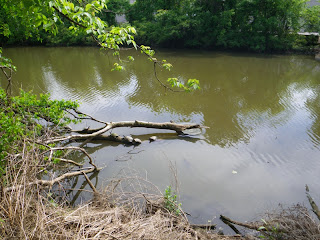 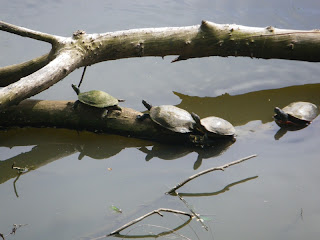 Last, here are some of the interloper sliders (natives of primarily the Mississippi drainage) on a rock in the Schuylkill not far up from the Fairmount Dam. 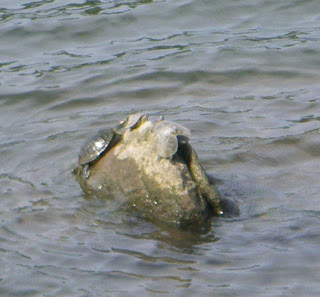 Posted by Bernard Brown at 7:05 PM No comments: