The salamanders are what’s happening these days. I haven’t gone back to the great door of brown snakes (Storeria dekayi), since I don’t want to disturb them any more than I already have, but I have been looking around other brown snake haunts to see if I could find any similar hibernation parties.

I’ve looked on chilly days, and I’ve looked on a few of the beautifully warm days we’ve had lately, but I haven’t found any snakes.

The redback salamanders (Plethodon cinereus), however, seem to have been enjoying the weather. I just checked my records, and I’ve found redbacks in every month of the year except for July, and almost always in temperatures below 80 degrees. These little critters stay underground in hot, dry weather, but give them a cool, moist hiding spot near the surface and they’ll use it.

A week ago, on the 5th, Jen and I went to the Mount Moriah Cemetery in SW Philly to check for brown snakes. It was sunny but chilly (low 40s) in the late afternoon, and I’d been thinking that the right piece of cover might possibly reveal some basking snakes, but what we found was salamanders: 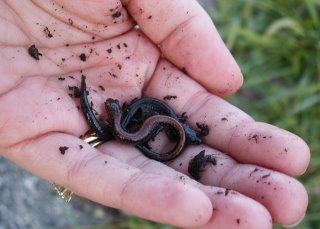 I went back midday yesterday (the 10th), another sunny day, but again found only salamanders. I need to stop saying “only salamanders,” since these are some beautiful salamanders. They were also pretty meaty looking for redback salamanders. Maybe they’ve been laying down fat for the winter, but they’ve lost a little of the slender grace I like so much in redbacks.

Of course maybe I've developed a really strangely critical eye for redback salamanders after finding so many this fall, and these look pretty normal. I'll let you be the judge. 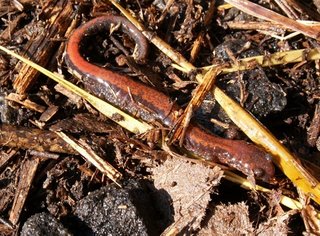 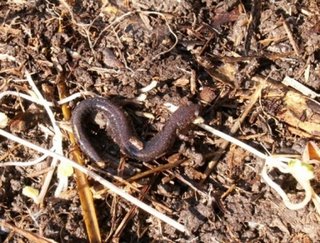 Here’s one other salamander, a two-lined (Eurycea bislineata). We were hiking with some friends in Somerset County, NJ, on a sunny day (the 4th) in the high 40s. Jen checked a rock in a stream, and she found this very muddy looking guy: 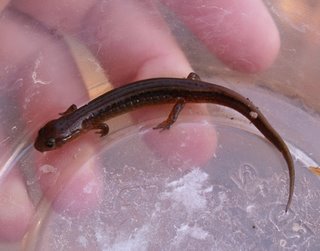 Two-lined salamanders live in streams. You’ll find Redbacks anywhere in the woods except for streams, but two-lined salamanders stick under rocks in very shallow water or just at the edge of the water. I usually find them under rocks that are resting partly on the land and partly in the water. I think they like to be out of the water but want to be able to jump in if they need to make a speedy getaway.

- 6 redback salamanders
Posted by Bernard Brown at 7:28 AM No comments:

On Halloween we went to Centralia, PA. This was entirely by coincidence; Scott had been talking about going to Centralia all summer, but as an exploratory trip to a place where we figured we wouldn’t catch anything, it kept getting pushed back for more likely-productive trips.

Why Centralia? At first Scott was attracted by the idea of an abandoned town and all the abandoned structures and piles of trash that implied. I immediately thought of the strange temperature dynamics of an area of land heated by below rather than from above (by the sun).

Centralia was a very typical small coal mining town in Central PA (southern Columbia Country) up until the 1960s, when a trash fire in the town dump ignited a coal seam. The underground coal fire has burned every since. It undermined the main road running through town (Rt. 61) with smoking cracks in the asphalt, it caused hot, stinking sink holes in backyards, and it filled houses with carbon monoxide.

A few years ago the state and federal governments got together to buy out the remaining residents and condemn the town for safety reasons, although a few people still live there, and the postal service recently revoked the town’s zip code.

I had fantasies of blocks of collapsing houses and debris everywhere, surrounded by forest, and seething with cold-blooded creatures who could stay active longer into the winter because of the extra heat. Maybe they’d avoid the actively smoking cracks in the earth.

When we (Scott, Josh, and I) got there, though, we found an oddly neat abandoned town. There were a few well-maintained houses sitting by themselves, two very well-maintained cemeteries, and a few-blocks’ worth of very sterile-looking sinkholes (that were actually crawling with crickets). There really were smoking holes in the ground, which was kind of cool, but nothing about them suggested herp habitat. 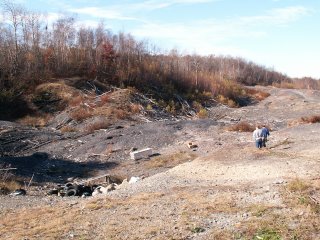 Whoever’s been cleaning up in Centralia has done an excellent job of clearing away debris as the houses have come down, and we only found a few trash piles to look through, yielding only a few redbacked salamanders (Plethodon cinereus). 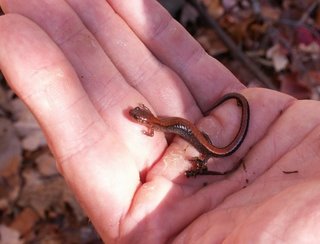 So, after lunch in a diner-type restaurant in the neighboring town of Ashland, we headed to Blue Mountain to see if we couldn’t stumble on any rattlesnake (Crotalus horridus) dens.

The sky was blue and the temperature was in the low 60s, making for wonderful hiking as we scrambled over boulder fields and rocky outcroppings. We found absolutely no snakes, in spite of our heavy hiking, however.

When it was time to head home, we cut up to a dirt run running through the state game land. We had some fun in a feed plot, where game managers plant corn to boost deer and other game populations. These can also indirectly boost populations of large snakes, since rodents also love corn, and lots of snakes love rodents. Josh and I tried the corn, but it was a little dry. 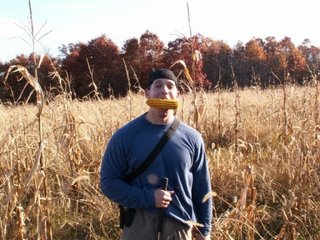 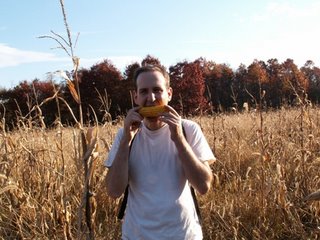 We did hit a little luck in a puddle next to the road. We were shocked to find tadpoles still in the water. How they’ll survive the winter in an exposed puddle on top of a ridge, we have no idea. We also found some newts in the puddle, but they’re a lot more mobile than the tadpoles. 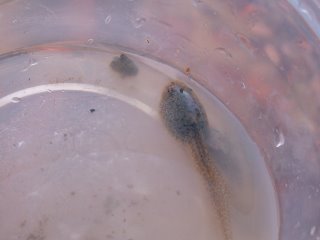 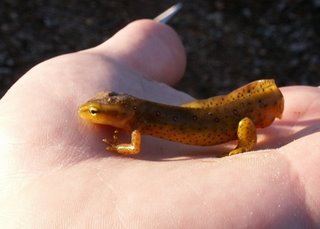 I don’t think we’ll return to Centralia, but I had a great time, which once again steers me away from the Pine Barrens. I had a fabulous time hiking, and I was impressed by the prospect of driving around backroads in rural, economically-depressed Pennsylvania, flipping trash, and hiking in beautifully hilly countryside.