I guess a lot of people would find standard herping disgusting. After all I'm hunting what for other people are "creepy crawlies," and they often share space under rocks with centipedes and spiders, ants and flatworms. I spend hours thigh-deep in marsh muck stinking of sulfurous dekay and have snakes spray me with feces and foul-smelling musk.

Yet urban herping presents its own uniquely disgusting hurdles. I don't find so many used condoms out in the woods, but in the Mt. Moriah Cemetery they're almost as common as the red-backed salamanders (Plethodon cinereus). 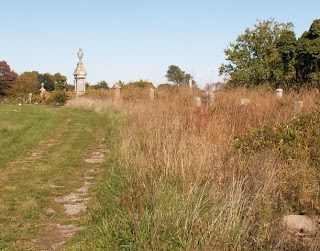 Also disgusting is discarded clothing. That might not sound so gross on the face of it, but why would you discard clothing in a cemetery frequented by prostitutes and used by homeless people for a camp site? I'll let your imagination race with that one.

On the afternoon of 12th of October (sunny, mid-70s) I came back to Mt. Moriah and my favorite wall there to look for more brown snakes, but I didn't spot any out and sunning themselves as had Eitan and Shoshanna the week before.

The one piece of artificial cover there is an old pair of work pants, moldy and stiff from seasons exposed to the elements, home, I suppose, to a thriving micro- and macro-biological community, kind of like an artificial reef. Using as little of my finger as possible, I lifted up the pants (so stiff they were more like a piece of particle board than fabric) and saw three brown snakes. I grabbed two of them and stuck them in a plastic container, but the third disappeared INTO the pants.

What a quandary that presented. There was a snake in there, but I sure as hell didn't want to reach my hand in there. As gingerly as possible, I lifted the pants by the waist and peered inside. I saw a coil of a snake balanced on a stiff fold of fabric, within reach but again nowhere I wanted to stick my hand.

So, I shook the pants out, expecting the snake to fall out so I could easily grab it from the ground without the unsettling contact with foul cemetery pants.

That little guy hit the ground, but it was not alone. Three others made the short fall too! That's right, I shook four total snakes out of an ill pair of stiff, moldy, crusty old pants. Here they are in the temporary holding container, waiting to be marked and released. 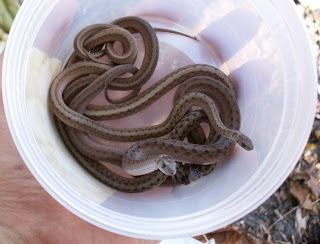 The extra fun part was that two of them were re-captures from the week before.

I'll leave you with a picture of a lead-backed phase red-backed salamander, in the process of wriggling out of my hand. I found these in the cemetery, and again along Cobbs Creek as I searched for earthworms - I had to turn over a lot of cover for two measly nightcrawlers, but had no trouble turning up a half dozen salamanders. 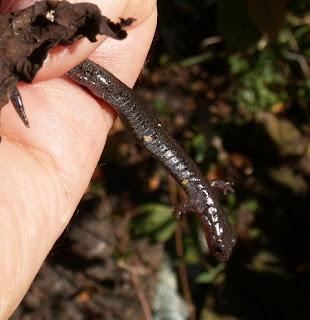