I’m starting to develop a slightly slap happy resignation to finding nothing major when I drive more than 40 miles to go herping. I'm not angry about it anymore, I just shrug and chuckle.

Today (Sunday May 21) I got nearly-skunked in Pennsylvania for a change. I headed back out I-78 to try Blue Mountain a second time for timber rattlesnakes (Crotalus horridus). The goal was to find some rattlers basking in the morning sun.

The forecast had been for partly cloudy weather with a chance of rain later in the afternoon. It had been raining during the week, so the ground wasn’t too dry. It was almost entirely cloudy, cool (50s), and windy on top of that ridge, though, so there was no sun to draw any critters out onto the surface.

Tent caterpillars were crawling around. They kept catching my eye with an almost-herp form and pattern. 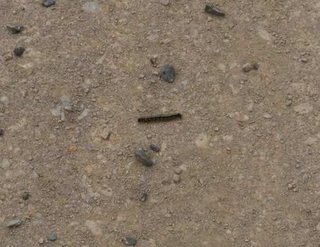 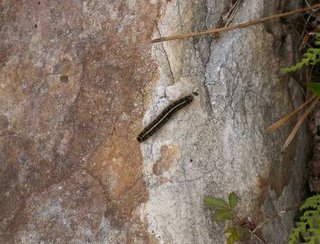 Close to the end it hit me that I hadn’t even found any redback salamanders (Plethodon cinereus). Not finding redbacks this time of year is like having your friends all leave you alone at a party – you kind of wonder what’s wrong with you. They don’t think you’re cool anymore? Did you do something to offend them?

Luckily I found two towards the end. Here’s the second one pretty much as it was under the rock (I moved a little stone for a better shot). 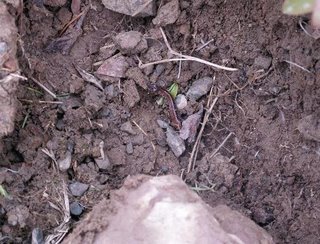 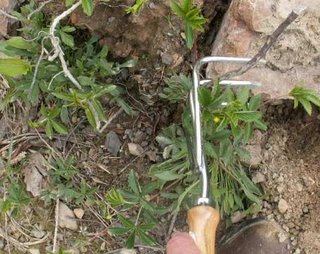 That’s my cultivator holding back the plants for the release shot. I’m not sure if I’ve properly introduced my cultivator yet. Doesn’t it look scary? I could imagine it as the prop for a horror flick about a mad gardener.

The cultivator is my favorite herping tool. It lets me turn over soggy logs without them falling to pieces, and if I want them in pieces, it can tear them apart. It gets a better grip under rocks than my fingers, and, when I’m turning over trash and debris, I don’t have to worry about nails or broken glass. It also saves me about six inches of leaning over. That might sound trivial, but it adds up over the course of four hours and hundreds of rocks and logs.

Here’s the cultivator showing something I find under logs a lot more than herps: termites. See all those little rice-grain-looking things? 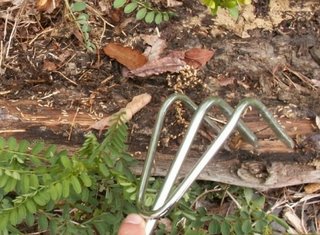 I checked out the pond in which Scott and I had found the newts and egg masses at the beginning of April. I was surprised to see that there were still egg masses there. I can’t imagine that the eggs could still be developing; the larvae must have hatched out by now. I wonder how long the masses linger before they disintegrate. 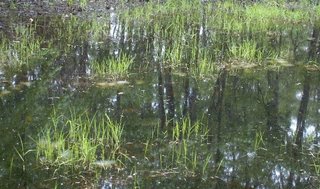 I also tried out the bog next door, but nothing was hopping or crawling around. 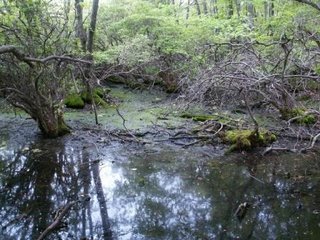 I did see one larval spotted salamander (Ambystoma maculatum), but I did not get a photo of it. I think this is what became of all those wood frog (Rana sylvatica) eggs. 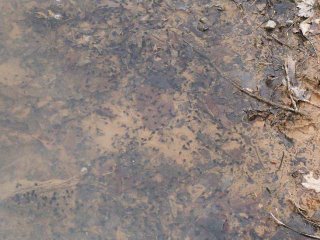 Last, here are some pretty non-herps I decided to take pictures of. The first is some kind of swallowtail butterfly I found resting on the grass. 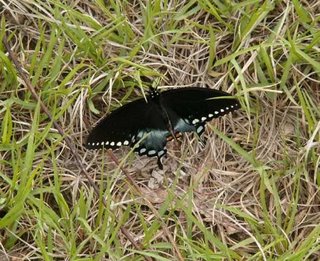 This bird is a scarlet tanager. I usually don’t take photos of birds, but this one blew me away. 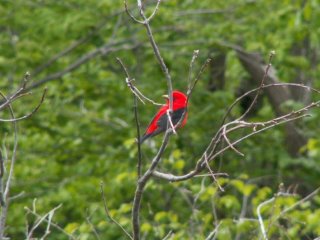