I bought my poncho at the beginning of 2000 as gear for the Inca Trail. You could fit a camel under it; it's a huge backpacking poncho that snaps up in the back, and I don't think I've been using it enough lately.

Rain should never keep us from herping, especially in the middle of the summer. I've had to remind myself of that, though. My new little obsession of turtle snorkeling is only possible in relatively dry conditions. The rain itself isn't the problem, rather it's all runoff washing silt into the river and stirring up the sediment on the bottom. I'm learning that even rain upstream - like way upstream in New York - can stir up sediment and raise turbidity too much to be able to see map turtles (Graptemys geographica) on the bottom.

So last weekend (August 9th) when I looked out on a solidly rainy morning, I saw my snorkeling plans washing away. Fortunately box turtles (Terrepene carolina) are actually relatively easy to find in the rain, so I switched the snorkel and mask for my poncho and sneakers and headed into the woods. I chose a favorite old tract of woods in New Jersey - sort of edge of the Pine Barrens - and after only about a half hour came across this pretty girl at the edge of a clearing: 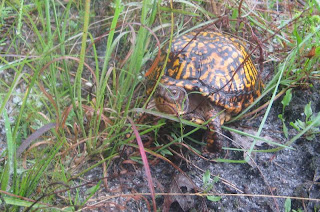 After I briefly checked her out to confirm she was a she, I stood back and watched her tromp along the edge of a puddle.

Unfortunately that was the only turtle I saw. The rain stopped, and I stopped to stare a few minutes over a creek running through the woods. Everything green is greener after rain... 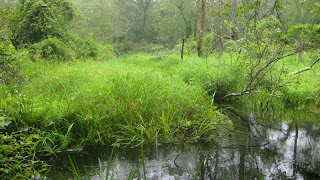 ...and a beautiful, ethereal haze hung over the water in a flooded section of woods nearby. 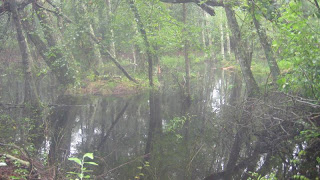 On my way out a fawn popped out of a meadow and, staring right at me, took a few steps forward. I'm not sure what she was thinking; do I look like a doe? Apparently not at closer range, since the little guy turned and bounded into the woods after a few moments of consideration. 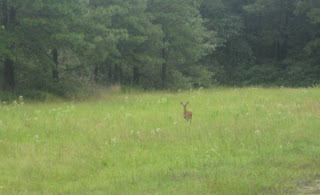 Posted by Bernard Brown at 3:51 AM No comments: