Somehow with all the worm snakes (Carphophis amoenus) I've found this summer (5?), I hadn't managed to get a good picture until the last three on October 1 in Winslow WMA in New Jersey. The first picture is of one sitting just how I saw it when I lifted the board. 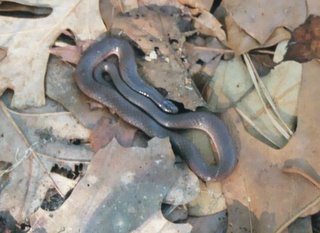 The next picture is of the worm snake caught seconds before and a few feet away. Note two things. One is that these guys are small. This is a full grown worm snake. The other is that they are very squirmy when you catch them. They do not stay still, but constantly dig their noses at funny angles around your fingers and twist out of your grasp. I can't blame them, but it does make it hard to take quick pictures of them. 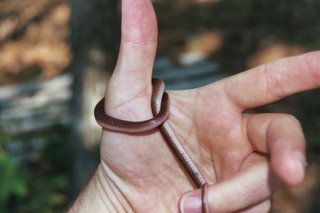 This was my most special find of the day: a marbled salamander (Ambystoma opacum). The first picture is of the salamander just as I found it under its log. 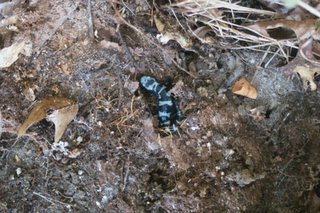 In the second picture you'll see it starting to get into its defensive posture, with head down and tail up (not quite yet, but it's taking a second to strike the pose). If you compare these to the other salamander pictures I've posted, you'll notice how pudgy it looks. The marbled salamander is from a different family, the ambystomids, than the others I've found this year, all plethodontids. 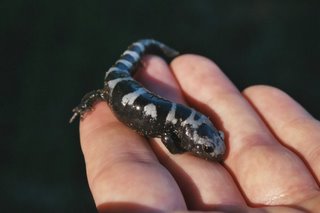 Posted by Bernard Brown at 7:21 PM No comments: