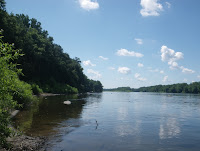 Scott recently complemented my turtling Jedi skills. I can't claim that the force is strong in me, but I have been working on my underwater stealth approach (I need to think of a better name: submarine snatch? dive and grab? drift and rip?).

We're all used to seeing turtles basking on a log or a rock in the water, and then seeing all of them drop into the water just as we get close enough to see what kind they are. If you've been canoeing or kayaking around turtles, you may have noticed that they wait a little longer to make their watery getaways. More than one herper has thought, 'what if I get even lower in the water?' 'What if I swim along as low as I can and try to grab them before they dive in?'

I'm here to tell you that it can be done. I've tried and failed at this many times in the past, and I think the problem before has been that I've used my arms too much, that I've been too high in the water. I even tried floating a log in front of me for a while, but they still dropped before I could get closer than a couple yards.

The key is flippers. The mask and snorkel are a given, but with the flippers you can kick yourself along with minimal motion above water (hands and arms submerged, of course), and swim along underwater as far as you can between breaths. This doesn't work 100% of the time, but it works enough for a good time.

It helps to keep on the other side of whatever the turtles are basking on, and the boulders in the Delaware make great cover.

Here's a map turtle (Graptemys geographica) catching some rays up on a boulder: 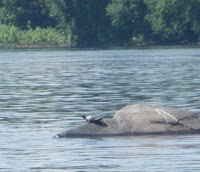 Here is a different turtle, in a shot I never thought I'd manage to take. I had swum up close from the other side of the boulder, and somehow she didn't see me as I got my camera a little above the surface and took the photo.

She did see me as I made my big leap out of the water to grab her, and she jumped into the water with a small male I hadn't seen initially. I popped back underwater and saw them break to my left, towards the middle of the river and deeper water (on a previous attempt, I couldn't see where the turtle went, just a puff of silt and then nothing).

It turns out that a human with flippers is faster than a turtle, or even two turtles. I caught the male with my left hand and kept kicking. I caught up with the female, and then swam back to the boulder to settle in for a brief photo session: 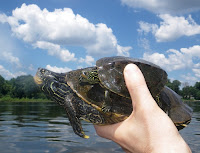 I let the male go first, and soon felt something crawling underneath my backside, which was loosely planted underwater on the rocks next to the basking boulder.

The trick worked perfectly with a smaller (medium-sized) female towards the end of the session. I would like to brag by pointing out how dry her shell is in this shot: 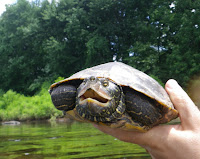 Here she is again, dipped in the water to get her pattern to show up a little better:

I had started off the session finding turtles in the traditional way, watching the turtles dive into the water as I sloshed in from shore, and finding a male who trying to hide, in this case hanging onto the vertical face of the boulder underwater. 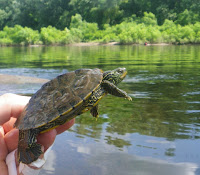 Here's a smallish female who had decided to hide around a snag and some weeds at the bottom: 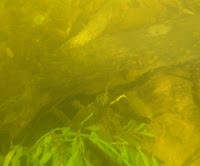 I thought she had a pretty neck.

I kept seeing some enormous mussels in the sand, and since I had recently turned in an article on mussels to run in an upcoming issue of Grid I asked a mussel researcher and she IDed it as a yellow lamp mussel, apparently rare in the Delaware. 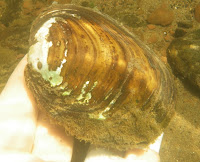 On my march back to the car, along the Delaware and Raritan Canal, I kept an eye out for map turtles... 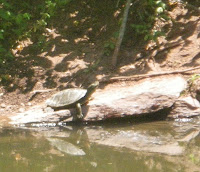 As well as the grander redbelly turtles (Pseudemys rubriventris) that have a habit of basking almost, but not entirely, out of the water.

This one is sharing a downed tree with a large stinkpot (Sternotherus oderatus), looking gawky, like it expects the log to roll over at any minute. 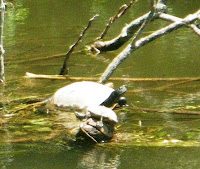