This is the most embarrassing post about our honeymoon. Before I start explaining why, I need to say that we had a fabulous time; as a honeymoon it was a complete and total success. As a herping adventure in one of the most biodiverse countries in Earth, though, it did not work out so well.

Nowhere was the failure more frustrating than in and around the tiny beach town of Corumbau, Bahia. Our “eco” resort was located at the southeast corner of a national park covered with Atlantic Coastal Forest, or Mata Atlantica in Portuguese. The Mata Atlantica used to cover a swath of coastal Brazil from its southeastern tip nearly up to the Amazon. Unfortunately that has been hot property over the past four centuries, and all but less than 5% of the original Mata Atlantica has been cleared for cities, ranching, and growing crops. Staying at an eco resort at the edge of one of the last remaining little bits of Mata Atlantica sounded really promising, but it turned out that the area nearest to the resort has been cleared and now is occupied and farmed by some of the local Indians. Instead of crossing the border of the park near Corumbau and ending up in the forest, you cross the border and end up in a mix of rangeland, farms, and the scrub that grows on the sandy soil once the trees are cut down.

So, I decided to set off along the beach into that scrub, it being what there was to work with. I left early in the morning. The first step was crossing the shallow river that is the southern border of the park. I had been thinking I would need to wade across, but it turned out there was a teenager with a dugout canoe for a ferry. Once across I was looking at a long beach to my right and scrub to my left. 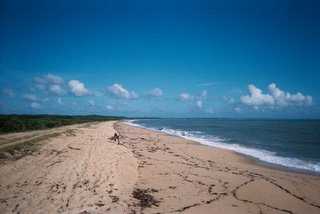 I wasn’t going to find anything in the sand on the beach except crabs, so I headed into the scrub. 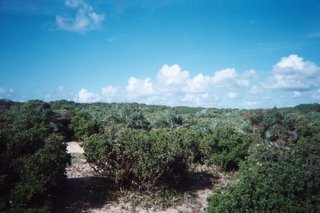 I wasn’t planning on going very far. My destination was the land on the other side of the river – no particular spot. The high temperatures there were in the 90s and there was no tree cover where I was going. My plan was to look around before it got too hot and to get back in time for breakfast.

There were lizards everywhere. I heard more than I saw. They made themselves obvious with quick rustling bursts that jerked my head around, but usually by the time I could find where the lizard had been it was where I couldn’t find it anymore. When I did spot them I was looking at the same Tropidurus torquatus lizards that ruled the resort. If I understand correctly, they were generally sitting out in the sandy spaces between the bushes and then bolted into the vegetation when they saw me coming. 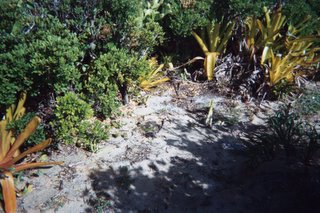 I’m not sure how many bushes I inspected or how many rustlings I followed, but I was finding only Tropidurus torquatus until I heard a different kind of rustling. Instead of the quick burst of motion that signaled the fleeing Tropidurus torquatus, this was a series of rustlings separated by little pauses – nothing explosive, just motion, pause, motion, pause, and so on.

Have I mentioned the camera problems? We had this great digital camera my coworker had leant me, but it wasn’t working, so I had brought the disposable camera we had meant for trips around Rio where we didn’t want to risk having the digital stolen. Anyhow, this is the picture I got of the lizard. What I didn’t get a shot of was the bright blue and white spotting on the inside of its rear thighs. 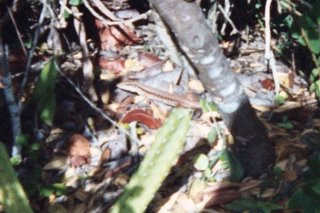 This guy is some species of ameiva (Ameiva ameiva?). Ameiva’s are relatively large lizards and fast, active hunters. The Tropidurus torquatus seemed to stand out and watch for something small to move in front of them; the ameivas actively search for their dinner, and that was what I was hearing: move forward, pause and look around, move forward, pause to look around, move again.

This was very special for me. Finally! It was something that wasn't just waiting for me on the patio; it was something I went out and found. Every hot place I’ve ever been has its species of little lizards that are just like Tropidurus torquatus. You see them running around the pool or standing on rocks along the road, but the ameiva is something you don’t see everywhere. I had seen a much larger ameiva once before in Bolivia. It was sunning itself on a cleared hillside in a cloud forest region. It had a normal brown lizard front but a shockingly brilliant green and blue back half and tail. This one was young, I guessed. After several times having lined up a good shot and it taking a few steps out of the shot, I finally clicked and got this photo.

I was running low on water and I was really feeling that sun beating down on me, so I decided to take advantage of my little victory and head home to eat.

My next trip up the coast went very similarly. There was a different Indian teenager paddling the ferry across the river, but the weather was very similar and the Tropidurus torquatus were still out in force. This time my goal was part herping, part regional exploration. The Indians who had taken over the park nearest to Corumbau (why the government couldn’t have bought them one of the giant adjacent ranches is beyond me) were concentrated in a small village called Barra Velha (pronounced “Ba-ha Velya”) about six kilometers past the river. I headed up the beach for a little while, taking advantage of the hard sand, and then cut in towards the soft, sandy road.
I enjoy tracking myself. I saw my boot prints from the day before in both directions and at some points wandering off in winding, curling patterns around and into the bushes. I passed the last of my footsteps and kept going.

I would have loved to have cut inland, but the tidal mangrove portion of the Corumbau River ran inland a few hundred yards from where I was walking and formed an impassible barrier. I aimed for a patch of non-mangrove trees that, by my estimation, were maybe a kilometer short of where I needed to go.

There was nothing doing around the trees. I flipped the logs that I found, but they hid nothing but more hot, dry sand. I raked through the dry leaves, I studied the trunks and branches I could get close to, but saw nothing.

I went back to the sand road and pushed on. I was shocked at one point by a pair of bright green parrots – not parakeets, but full size brilliant birds that flew along the line of mangroves, landed on a tree far ahead of me, and then flew on. I asked myself if I had just seen them and kept walking.

I cut inland again at what looked like a dried up pond next to another patch of trees. I forced myself around and through a thoroughly tangled mess of charred vines and bushes; I guess a fire had swept through there not too long before.

Something moved. I heard the rustle, then a pause, and then the rustling again. I searched for the source as much as I could without moving a muscle, and caught a glimpse of shocking blue and green. 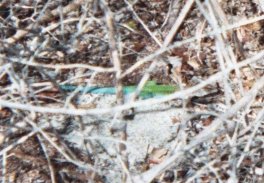 I’m not sure I thought this at the time, but the effect was similar to that of seeing the parrots: a confused sense of ‘is that real?’ I grabbed the camera, and of course the ameiva’s next move took it out of view again. I played this kind of hide and seek with it and in the end got this picture. I circled around the pond and saw one more ameiva, this time smaller and less colorful but still a really special find. 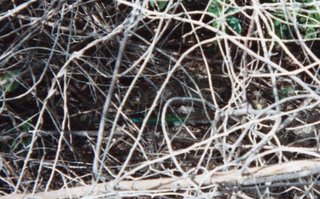 That’s about the end of the herping account for that morning. I continued on to the village, where I was warmly received into some of the most shocking poverty I’d seen since I lived in Bolivia. I found it extremely unsettling to walk from a luxury resort where I was served obscenely huge quantities of food by waiters to a house with dirt floors and waddle and daub (stick and mud) walls where my hosts served me a glass of water with the pride of people for whom running water is something really special. I bought several of the beaded necklaces that seem to be the Indians’ signature handicraft, and had an interesting conversation with the locals, in so far as my Spanish and limited understanding of Portuguese permitted. 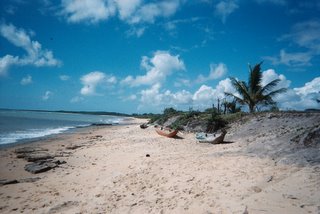 Posted by Bernard Brown at 7:24 PM No comments: