Does persistence pay off, or does it just waste time?

I've had terrible luck finding brown snakes (Storeria dekayi) at what has generally been the most reliable brown snake site on earth (aside from, perhaps, the famous 'shanty town' in Ernst and Ernst's Snakes of the United States and Canada), the Mount Moriah Cemetery.

Yet I keep going. I know they're there. There's no way the entire population up and died, or moved further out into Delaware County ('Not another garter snake, Martha! There goes the neighborhood.'). I'll blame a combination of bad weather and unwieldy artificial cover. I can flip a few boards pretty easily, but a trash can full of old bathroom tiles, a pile of cinder blocks, a discarded toilet, and a six-foot tall stack of jumbled two-by-fours bristling with nails outclass even the potato rake.

And then there is the vegetation. The other-worldly succession processes, apparently distinct for each section of the cemetery, have overwhelmed innumerable carefully-placed boards and shingles so that I can't figure out where to flip anymore. The path to one of my favorite little piles of metal panels has been blocked off by an unholy union of highly-invasive Japanese knotweed and the yet-more-invasive and aptly-named-by-either-of-its-names Mile-a-Minute-Weed a.k.a. Asiatic tearthumb. 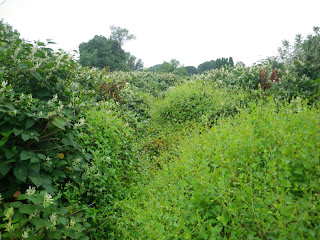 The knotweed provides eight-foot-tall banks for the tearthumb to use as a scaffold so you can't step over it, you can only trap it down with the potato rake and sort of step on it to make a path to avoid losing too much flesh. I hacked through fifty yards of this mess and found nothing.

I did find some very promising boards in another section of the cemetery, less overgrown and easy to flip. Unfortunately some wasps had found them first and drove me off.
Posted by Bernard Brown at 7:19 PM No comments: