The day before I ran into that bear in I spent some time in a in .

I had finished with some morning meetings in , and all I had to do the rest of the day was drive over to Dubois. That left time for a herping stop near .

I had hoped to find some redbelly snakes (Storeria occipitomaculata) or even timber rattlesnakes (Crotalus horridus) up in them hills, but it was a day for the salamanders. I’m not upset; I had a fun, productive time that afternoon (May 2nd, 65 degrees and sunny), but I’m still hoping for more snake trips this year.

I started off walking up a dirt road with a dribble of a stream seeping down the middle. On a whim I looked under a few rocks in a particularly wet section and found a couple northern dusky salamanders (Desmognathus fuscus fuscus). I’ve got to work on taking better pictures of duskies. Many are drably true to their name, but some, like this guy, are marked in a deep purple and red pattern that looks great in real life but brown in photos. 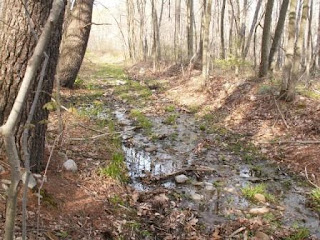 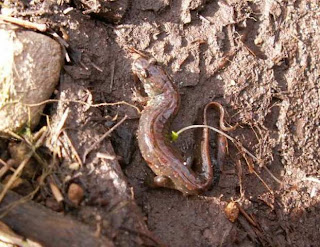 I continued up the road into some clearings – the basic SGL clearings with big, thorny hedgerow

s running through the middle of it. I found a redback salamander under a soggy log, and then I zeroed in on a pond in one corner of the clearing that spilled over one bank to form a long, marshy strip of grass in the field. 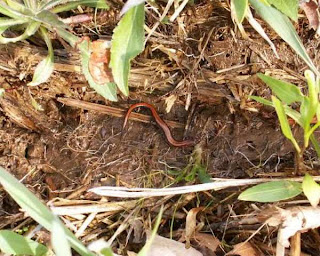 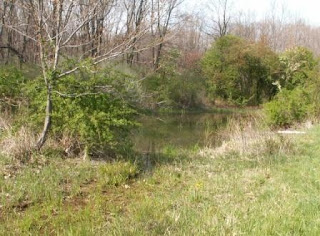 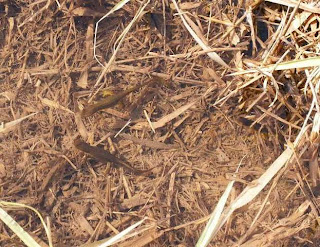 I smiled. Wherever there are newts there’s fun. They’re pretty, they’re active in all kinds of weather, and they’re slow and easy to catch. I didn’t go for any in the pond, but I found a bunch in the water seeping out from the pond into the marshy area. There it was a simple matter of reaching down and grabbing them. 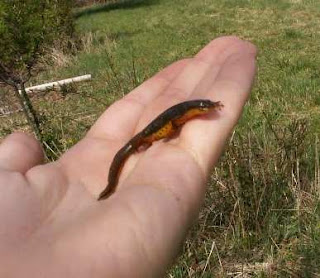 At least some of them were mating, since I found one with its rear legs locked around another’s neck. This might not sound like foreplay to you, but apparently this is what male newts do to get female newts in the mood: they put them in a leg lock with their hind legs around the shoulders and hang on for a while, culminating in bouts of violent shaking until the female decides she would like to mate with him. 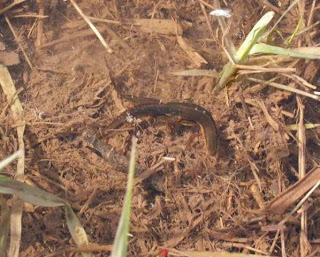 And then the mating isn’t quite what you’d imagine either. Once the male has seduced the female, he walks in front of her and deposits a packet of sperm (which comes complete with a stalk to balance on) from his cloaca on the bottom of the pond, and she then plucks it from the stalk with her cloaca to fertilize her eggs.

Posted by Bernard Brown at 6:44 PM No comments: