By now we should know better than to get our hopes up about the weekend any earlier than Friday. A forecast any longer than two days out is pretty much worthless in , as was plainly demonstrated at the end of March. Still, our optimism and hunger for herping sometimes gets the better of us, and late on Wednesday we were planning another grand turtle outing for Sunday (April 6th), which was predicted to be sunny and in the mid 60s.

Of course we were setting ourselves up for disappointment, and on Thursday the forecast wasn’t looking quite as good for Sunday. By Friday it was obvious the day was a wash.

Any writer of fiction knows that simple success is rarely as interesting or compelling as failure, and that you must make your characters suffer in the interest of a good story. This is a harder principle for an autobiographical blogger to accept; I’d gladly trade the reader’s good experience for mine (sorry). Unfortunately reality sometimes works out a better narrative than I’d like.

The first cruel plot twist (actually the gentler of the two) here is that Saturday ended up the far better day for herping, but on Saturday I couldn’t go out. The big event I couldn’t get out of was the Philly Cleanup. Mayor Nutter decided that the City could use a good sprucing up (he’s right), and Jen and I volunteered to do our part in the Cobbs Creek section of .

Saturday morning, as Jen and I were getting ready to go, I checked to see where exactly the cleanup would be. I entered the corner of and into Google Maps and gasped when the program displayed the map. We would be cleaning up around two large overgrown fields I scouted about a month ago (See the February 25th entry). At the time I had been happy to see some old boards and other nice debris scattered around the fields. I had even spread one pile of old boards out to make good cover for black racers (Coluber constrictor).

So, on a day I wanted to go herping, the day before when we’d planned to go herping but no longer could thanks to a change in the weather, we would be working to ruin a spot I had plans to work in a few weeks.

Of course on principle the cleanup project is a good thing. People shouldn’t dump trash in public parks, and it is good to clean up public parks, but part of me wishes they could have saved that little section for later.

Still we managed to show up smiling and ready to work. The first person we met was Mark Focht, the head of . I also had the pleasure of seeing Joe Caesar again; Joe leads volunteer cleanup in Cobbs Creek for . He is one of the several hard-working, charismatic, truly-dedicated employees I’ve had the pleasure to volunteer for over the past few years. These guys work 6 or 7 days per week improving our parks and helping others do the same, and have volunteer management down to a science.

Joe put us to work cleaning up a dump site in the woods at the bottom of a steep slope (so at least I was spared the sight of my boards in the fields being taken away), and Jen and I both had a good time. She filled bags with trash and I ran them up the hill to the sidewalk – great exercise. We even got to meet Mayor Nutter. His entourage pulled up, we all took a picture with him, and when he thanked us individually for volunteering. Jen, without skipping a beat, thanked him for being our mayor.

We wrapped up at two, and since we were so close to the , we decided to check to see if the brown snakes have started moving yet. We determined that they’re probably still hanging back in their hibernaculum (they certainly weren’t out anywhere we looked). Maybe they’re too scared of the redback salamanders (Plethodon cinereus) to come out – we found about twenty of those. Here are the photos: 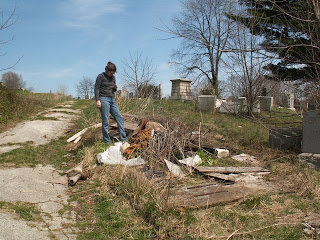 This might be the smallest redback I've seen at under an inch. It's probably one of last year's babies. 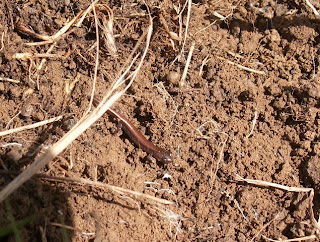 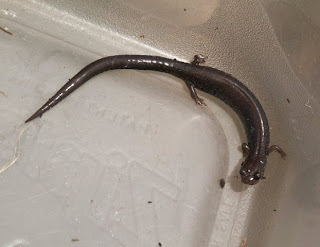 Last, this one's a little out of focus, but the scene (not posed) was too cute not to post: 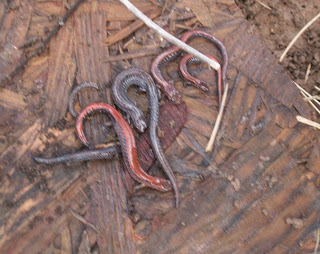 Posted by Bernard Brown at 5:16 PM No comments: