I found a brown snake (Storeria dekayi) in the Woodlands cemetery Saturday morning. Midway through my weekly run in the cemetery I checked the same board I’ve been checking for a few weeks now, and this time it wasn’t just worms, slugs, and centipedes. I’m leading off with the brown snake because out of all the herping I’ve done over the past week (and I’ve had a really good week of herping) it’s what’s gotten me the most excited. I checked my records and I found one DOR in the Wissahickon on April 18th 2004. This makes the 10.5 inch male in the Woodlands my earliest brown snake out of hibernation (in other words not including the big hibernating group of them we found in March last year).

It also makes it my first herp of the season within the limits of . (Of course I’ve been finding redback salamanders, Plethodon cinereus, but the more I think about them, the less they seem to obey the normal seasons.) I won’t be able to make any big trips this weekend, but I do hope to poke around the Cobbs Creek area to see if any more snakes are up in .

I did manage a big trip on Thursday along with Simon and Scott. After watching so many other good forecasts evaporating before our eyes, I couldn’t resist. So, on Tuesday, with a good day called for Thursday the 10th and a light and flexible schedule that week, I asked for Thursday off. Scott, Simon, and I headed out early and made for a large, privately-owned marsh in northern Chester County.

I wrote about the property on April 2nd, and again I’d like to state my appreciation to the owners for access. Our minds were blown yet again (Simon’s for the first time) by the scale of it as well as the beautiful marsh habitats – I use the plural because I’ve been impressed by the range: there’s the cattail marsh sections, the expanses of rose shrub, sedge marsh, flooded forest. This discussion really makes me self-conscious of my ignorance of wetland geology and hydrology, but there’s a lot in there to explore.

We spent from around 9:30am to around 2:30pm taking one sucking, slogging step at a time through the muck and deep, wet mats of vegetation as we covered just a little more of the 2,500 acres.

We heard the American toads (Bufo americanus) calling their little heads off as we drove in, and they were hopping all around us almost everywhere we went. One of the lovely things about toads is that they have none of the fears and inhibitions of peepers and other little calling frogs. Toads just sit out there and dare you to grab them. 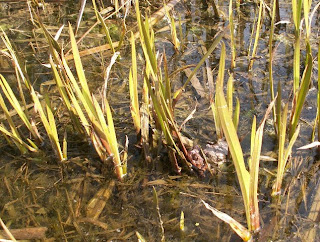 The easiest to grab are the ones in amplexus, the grip of love in which males wrap their front legs (feet complete with rough ‘nuptial pads’ to help them hold on) around females’ backs and don’t let go even if a 170 pound monster reaches down, for all they know to eat them. Male toads always put sex before life. The pickerel frogs (Rana palustris) stayed out of sight, but we heard their snarling calls most of the morning. We heard a couple peepers (Pseudacris crucifer) calling, but nothing like the choruses from a few weeks ago.

Here’s the first snake of the season (outside , at least), a skinny, scruffy garter snake (Thamnophis sirtalis). Snakes always look their worst right out of hibernation. They’re underweight, they’ve often got blisters or other skin problems, and they’re always filthy. 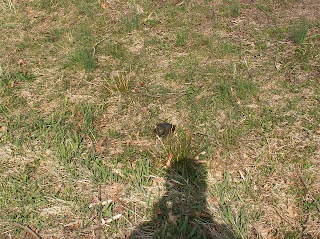 It was a male stinkpot (Sternotherus oderatus) and we found three others making the same trip over the embankment to the pond. I always have fun with the stinkpots. Some stay tight in their shells, and some adopt this adorable pose until you put them back down (we did them the favor of placing them at the edge of the pond, where they were headed). As cute as they are, always hold them towards the back of the shell since they bite and can reach further back than you think. 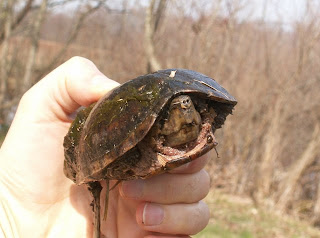 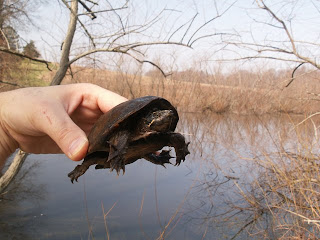 Hibernation ended none too soon for this one, disturbingly skinny and in need of a few good meals. 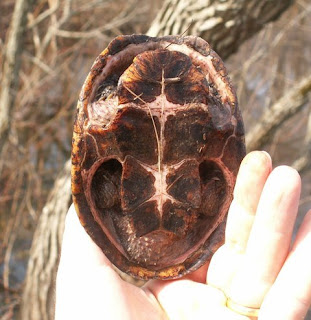 As a contrast, I’ve included a photo of Jen’s stinkpot (we adopted two last year), which is admittedly on the chunky side (it has started a diet). 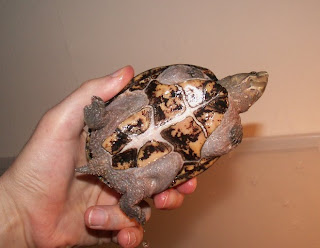 We saw some painted turtles (Chrysemys picta) make splashy getaways, and Scott snagged this little one. 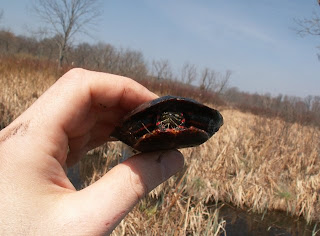 Out in a relatively open section of marsh I thought I could see something big moving under the water a few yards in front of me. After another moment I saw a bit of the shell surface, and I knew what it was. I took another photo with each step I took until I was nearly on top of it. 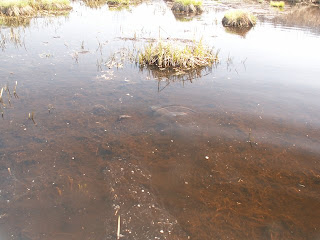 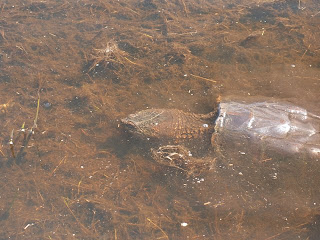 I was impressed with how little this monster of a snapper (Chelydra serpentina) seemed to care about my being there. It kept walking around slowly with its head extended until I was only a couple feet away. I hollered for Scott and Simon, and we quickly talked ourselves into picking it up. Here are a couple photos: one of Scott holding it by the tail and back of the plastron (contrary to popular opinion, a snapper should be supported by more than the tail when picked up) as it gives an angry warning snap, and another of Simon giving it a shot. 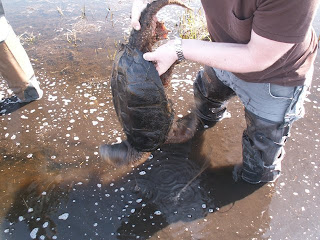 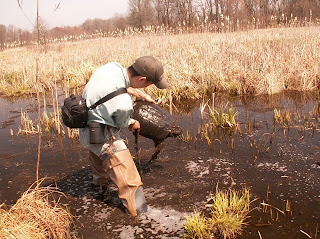 The last critter I’ll post is the first northern water snake (Nerodia sipedon) of the season, a beautiful little girl, showing that crimson and grey contrast you sometimes see in them. Most impressive was that Simon got away without getting nipped. 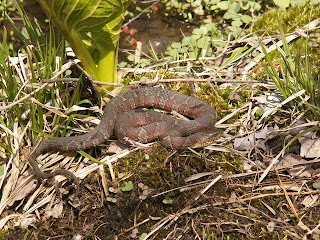 At the end of our trip, as we enjoyed our celebratory Dairy Queen Blizzards, Simon made a passing reference to the “one time a snake has bitten me.” Scott and I stared in shock and then made Simon repeat that. Did he really mean he’s only been bitten once by a snake, any snake? Including water snakes? Including racers? Simon’s spent years working in herpetological field research and many more years working with snakes as a hobbyist both in the field and captive settings. I lost count of how many times snakes (all harmless) have bitten me a decade ago, and the same goes for Scott. We look forward to throwing more water snakes and some racers (Coluber constrictor) at Simon to see if his bizarre luck can hold up.

We visited one more marsh on our way home. It was pretty unremarkable, but we did see lots of spotted salamander (Ambystoma maculatum) egg masses, and a few of them had clouds of larvae hanging around. It’s hard to imagine, but in a few years one of two of these half-inch squigglies will be a spotted salamander like one of the ones we saw back in March. 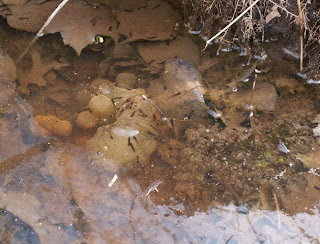 Posted by Bernard Brown at 4:02 AM No comments: