The speaker will be our own Scott McWilliams, or rather Scott McWilliams, MD. I might have mentioned on this blog that Scott's a doctor, specifically an emergency medicine specialist. He will be speaking about venomous snake bite, so this will be a great opportunity to learn more about the natural history of venom, the public health aspects of bites (who gets bitten by what, how often, and why), and of course the best ways to treat venomous snake bite.

We'll be back in Marple for this meeting. See below for the details:

From the East or West: PA Rte 3 (West Chester Pike) to PA 320 (Sproul Road), South to the "T". Enter parking lot just past police station or turn left on Sproul and take your next left to get to the other parking lot (on the right).

There is a parking lot around the Township/Library Building and one just to the east of the building. Street parking is possible on Sproul Road from the Police Station north.

Refreshments will be served. While there is no admission charge, there will be a voluntary collection to cover the speaker's fee and other expenses.

Posted by Bernard Brown at 6:59 AM No comments:

I have decided to promote the lowly musk turtle, a.k.a. stinkpot (Sternotherus oderatus) to box turtle status. From now on a stinkpot can make a trip. Rarer herps can of course do the same. Find nothing but a timber rattlesnake (Crotalus horridus)? Cool. Spent five hours in mud and briars, and only came up with a spotted turtle (Clemmys guttata)? That's a day well spent. Box turtles have long been the relatively common herp that can ex post facto justify leaving the house for several hours, burning lots of gasoline, paying tolls to cross the Delaware River, and yes, even road cruising.

As much as I don't like road cruising in New Jersey, followers of this blog will notice that I end up out there once or twice a year. This year we were taking along Mike, a herper we met through the Delaware Valley Herpetological Society, for a general cruise with low expectations.

Mike was eager to see Fowler's toads (Bufo fowleri), a new species for him but probably the most reliable critter on NJ sand roads at night. If the temperature is above 70 degrees, you'll see one. If it rains, you'll have trouble driving more than a few yards without running over a toad.

Temps stayed above 70 degrees long enough to see a dozen or so toads, this one pretty representative: 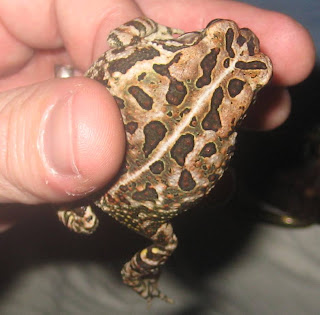 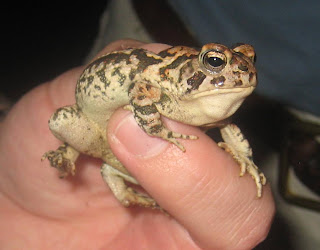 Mike's mission was thus accomplished, but Fowler's toads, however cute and endearing as they squat high off the pavement on their front legs and hop with suicidally poor timing towards your tires as you drive past, don't quite do it for me.

This adorable stinkpot, however, justified the whole trip for me. Stinkpots are pretty active at dusk and apparently just after nightfall, since we are often able to spot them tromping around in the shallows of Pine Barrens ponds and lakes. Scott spotted this one, hollering at me from a few yards away on the shore - I had worn sneakers I didn't mind getting soaked, he hadn't. 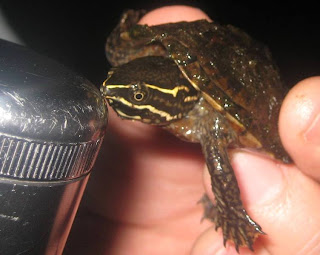 We drove home happy.
Posted by Bernard Brown at 6:11 AM No comments: