I found nothing on New Years Eve, but I did try. I had never herped in the state of Delaware, but a herping acquaintance referred to an area of woods and Delmarva bays not too far from Smyrna. Delmarva bays are little ponds on the Delmarva peninsula. They generally do not hold water year-round and thus are poor fish habitat. The lack of fish, which eat amphibian eggs and larvae, make them great amphibian habitat at the right times of the year.

I should do this more often. I got a little lost yesterday as I always do on my first time out to a herping spot, but since being lost did not eat into any productive herping time, it was time well spent. Next time I go out, when I’m actually hoping to find something, I should know my way around a little better.

Here are a some pictures of the bays. The last one I took pictures of was on the large side – I’m not sure if it was a Delmarva bay or a normal pond. 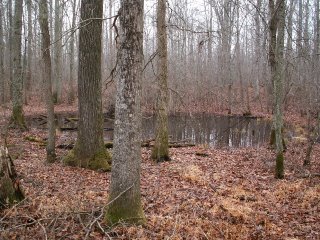 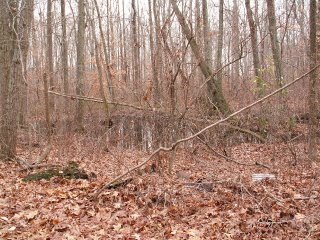 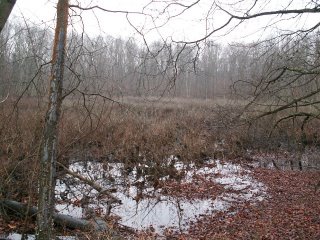 For those who are interested in geology, Delmarva bays (http://www.dnr.state.md.us/naturalresource/spring2001/delmarvabays.html) and Carolina bays (they’re the same thing, just in different sections of the coastal plain) are enigmatic little ponds. They are several millennia old, and no one is sure exactly how they formed. Most have been destroyed for agriculture or development. They had more recently been covered by federal wetland protection laws, but due to a recent Supreme Court decision that takes the Army Corps of Engineers out of the business of protecting wetlands that are not connected to navigable bodies of water, they are again at risk (http://www.uga.edu/srel/Reprint/2704.htm).
Posted by Bernard Brown at 4:21 AM No comments: