Here's the rat snake! I had been driving around with Shoshi after the Wetlands Institute terrapin (Malaclemys terrapin) release event, and we decided to make one more pass through some woods and marshland not too far away. Shoshi's dad, Eitan, and she had been there last year and had found both terrapins and some really impressive black rat snakes (Pantherophis obsoleta). Just as we were driving up to a spot where Shoshi and Eitan had seen a rat snake on that trip a year before, she called out the snake on the left shoulder of the road. 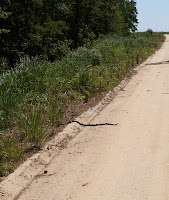 I drove a little closer and stopped the car. I took my time walking over to it, taking a couple photos of the snake in the classic frozen, kinked pose that rat snakes strike when they're surprised (this doesn't work out well with most moving cars).

I find that rat snakes often focus on your face when you come at them; this makes it easy to pick them up by gently getting a hand under the body and then lifting while the snake is looking you in the eye. They are also comfortable off the ground (unlike racers - Coluber constrictor - that tend to panic when they're in the air), so you can often handle them calmly for a moment. 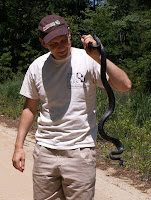 I took a lot of photos of this snake; it's hard for me to hold back and only post a few. 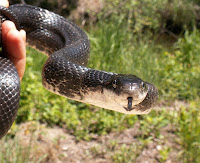 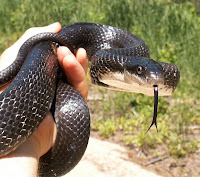 I let the snake crawl up my arm to my shoulder, where it stopped, still looking me in the eye, and gaped threateningly.

I was in love. What style! What restraint! The snake did nip me on the hand once, but otherwise decided to communicate not by biting, but by putting on a calm display of displeasure.

Just as I set it down, I realized I had forgotten to check whether it was a male or female, so I held onto its tail a moment to look - male. 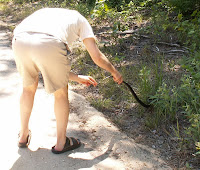 That rat snake would have made any herping trip, but the day was a lot more successful than just that. On our first pass, before we went to the Wetlands Institute, we immediately spotted a rough green snake (Opheodrys aestivus) in the woods on the way to the marsh we were cruising (we had seen a box turtle - Terrapene carolina - on the way. We helped it across the road, just as a county worker maybe fifty yards up from us shouted "I've got this one!"). 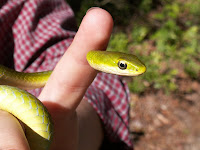 These are beautiful little insect-eaters that I see DOR a few times a year but hardly ever catch alive.

The snakes were fun, but the real target was the terrapins. We spotted this girl digging a nest hole on the side of the road (note that it was low tide, contrary to what I usually hear about them coming up to lay at high tide). 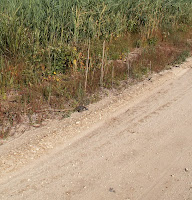 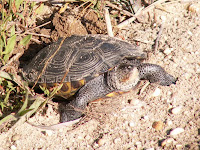 We saw this really pretty girl walking around looking for a nice patch of dirt. 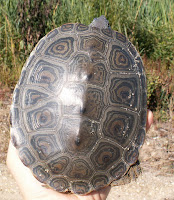 I love that concentric ring pattern on the scutes.

On our second sweep of the day, after the rat snake, we saw one of my little favorite herps booking it across the hot dirt road - a female mud turtle (Kinosternon subrurbrum). 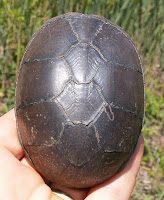 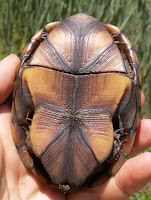 Here's a stinkpot for comparison: 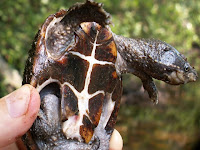 I'll wind up with another box turtle we found just as we were leaving - what a nice head on this turtle. 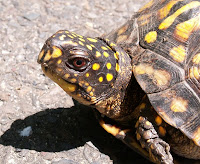 Posted by Bernard Brown at 9:45 AM No comments:

Here are some of my shots from our day at the Wetlands Institute.

Here are some of the headstarted hatchlings before release: 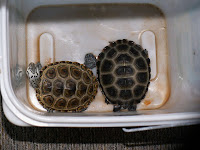 Here are the WI volunteers showing the terrapins (Malaclemys terrapin) to the kids: 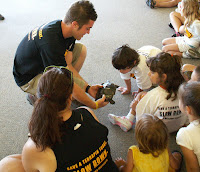 Here's an injured/rehabbed female, being released by the kindergarten teacher: 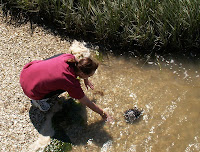 Here is a kid doing his own release with a couple WI interns: 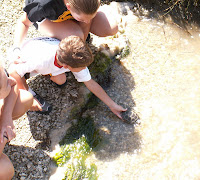 A shot of the marsh: 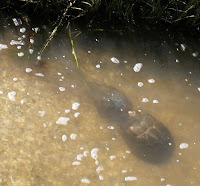 Here's the female who chose the perfect time and place (the path to the release site, just as a crowd of children and media were walking by) to dig her nest: 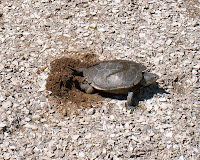 I'll wind up with one of the really cool predator excluder devices, a cage that keeps out the crows, raccoons, skunks, and anything else that would eat the eggs: 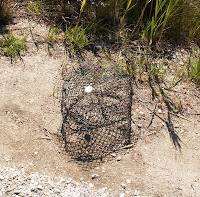 Posted by Bernard Brown at 10:09 AM No comments: