The Mt. Moriah Cemetery continues to surprise me. I keep finding lots of brown snakes (Storeria dekayi), which I expect. Here are six young brown snakes that I shook out of the infamous magical pants that I still only dare handle at the waist. One of them puked up a partially digested earthworm - puking is bad enough when you eat three times a day, but when you eat three times a week it's a much bigger waste. 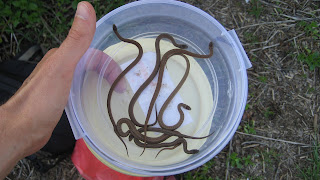 I keep finding redback salamanders (Plethodon cinereus) up there under almost everything I pick up, and I expect the occasional garter snake (Thamnophis sirtalis), but I wasn't expecting this little critter, a northern watersnake (Nerodia sipedon) under some trash in the weeds at the top of the hill. Watersnakes, as the name implies, usually stick next to water - it can be a marsh, a pond, a river, a creek in the woods, but always near water. 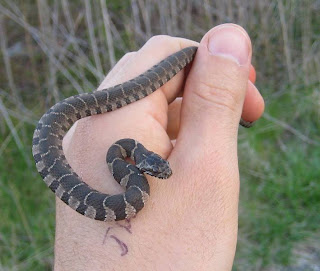 I probably shouldn't be surprised - Cobbs Creek runs around the cemetery in sort of a hairpin at 100 to 200 yards from when I found the snake,and I know watersnakes live in the Creek, even if I hardly ever see them. Still it's a little strange to find one near the top of the hill and not right next to the water.

I wonder what it was doing - I can't imagine it planned to hang out up there so far from minnows and tadpoles. Maybe it was taking a short cut over the hill (an epic journey for such a tiny snake) and was crashing for the night halfway there?

In case you're wondering what it plans to be when it grows up, check out this big one I found a few years ago in Virginia: 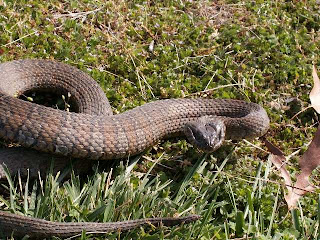 Posted by Bernard Brown at 5:19 PM No comments: