Scott recently remarked on his growing appreciation for salamanders (this is a big deal if you know Scott, who is usually a major reptile chauvinist), pointing out the satisfaction of fixing our herping activities to their life cycles. I think we do this for reptiles as well - for example when I target female timber rattlers (Crotalus horridus) in the summer as they bask to warm the babies growing within them - but this sort of life cycle herping is more pronounced for the amphibians, and in particular for the mole salamanders (genus Ambystoma), aptly named for the subterranean lifestyle that makes them generally inaccessible, except for when they breed.

Somehow when I went out on Saturday I thought I might find spotted turtles (Clemmys guttata) at a beloved patch of woods where we find them in the spring. I should have known the pools would be too dry.

Here's a pool as it was in spring: 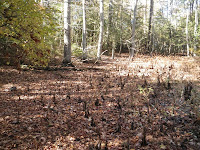 Dry vernal pools in November mean there might be salamanders to uncover, though, so I decided to make the best of the situation and flip logs.

First and most numerous were the red backs (Plethodon cinereus), still a pleasure to find (they'll be annoying me in the spring when I'm sick of them and lusting after other quarry): 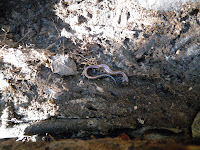 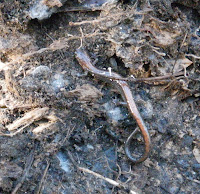 Finally one of the logs revealed something besides a red back or just nothing: 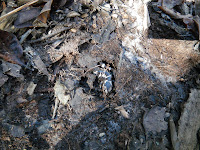 See all those eggs underneath her? 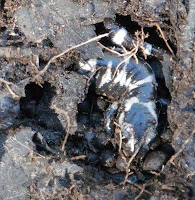 Another log right nearby revealed another marbled salamander, this one in a position that made it easier for me to pluck her up for a closer look. 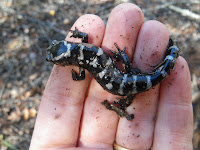 I was about to write that "I know better than to anthropomorphize," but you know what? I don't. Although I don't think we can ascribe human thoughts to non-human animals, I do think that the same basic instincts drive us, so that when we see these salamanders guarding those eggs, we can say that they're feeling protective, or even maternal. I think they get angry when they see a hungry cricket come at the nest, terrified when an enormous monster lifts the roof off.

In that spirit of sympathy for the tough little women of the salamander world, I stopped looking under logs. Two was enough. I was also getting a little unsure of how well I was replacing the logs on top of the nests. Ordinarily the rule is replace the cover object, then release the herp. That way no one gets smooshed, and the critter will find its way back under on her own. In these two cases, however, I wasn't so sure she'd get back under with her eggs, so I put the logs back down on top of the salamanders and their eggs. I did it very slowly and very carefully, but I was still caught between the fear of crushing them and the concern that I would leave too much space around them, possibly letting the nest dry out too much.

I wished all the other marbled salamanders well in their rain vigils and hiked back to the car.
Posted by Bernard Brown at 6:48 PM 2 comments: 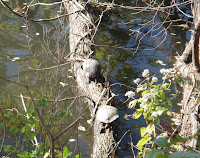 Just because it's November and the temperatures are in the 50s, it doesn't mean you can't go out turtling. I don't think I'm jumping in after these guys with the water as chilly as it is, but the Manayunk Canal's horde of invasive red-eared slider (Trachemys scripta) was well represented on the snags and logs. In retrospect this might mean I should have been wading around somewhere looking for spotted turtles (Clemmys guttata), but it was inspiring to see.
Posted by Bernard Brown at 3:22 PM No comments:

Sure there are piles of debris and unsavory goings on after dark, but how many tombstones are this welcoming?

In full disclosure, I straightened the mat out a little bit, but that's where it was, near a few of those trash piles. 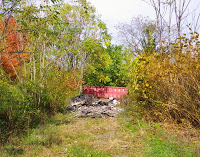 The above is a shot of a dumpster that I think was placed there for cleaning up the trash piles. It's been there for at least four months now.

I know, the Mt. Moriah Cemetery, straddling the Philadelphia/Yeadon border, is strewn with trash even at its best, but this year it's gotten way out of hand. I am having a harder and harder time finding the piles small enough to get to the bottom of, let along the single and big pieces that the brown snakes (Storeria dekayi) like to hide under. 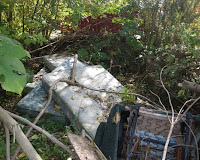 Of course they were probably used by prostitutes, but when lifted (with a potato rake - as little skin contact as possible) they frequently revealed browns and garter snakes (Thamnophis sirtalis).

The trash isn't all that works against the cemetery. The Japanese knotweed continues to overwhelm the rest of the vegetation. I liked this image of the knotweed vying for space with the multiflora rose. 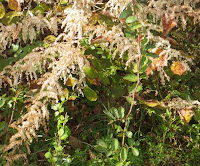 I did find a few red backed salamanders (Plethodon cinereus). See the gray one (lead-back phase)? 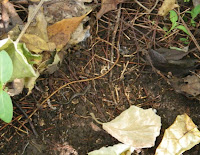 Give them credit; they appear just when our hearts are sinking with the winter breezes, and display some spunk in hand. This little guy knows the ground is somewhere between these fingers. 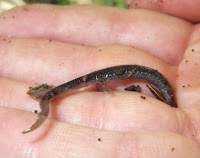 Posted by Bernard Brown at 6:29 PM No comments: