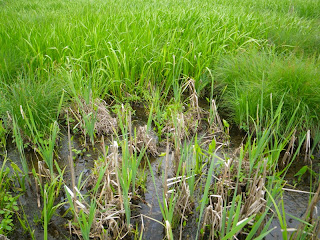 I'm given to understand that babies and snapping turtles (Chelydra serpentina) don't mix well. As much as I think every child should know how to properly handle a snapping turtle, I decided 5 months is a little too young. I also found it challenging to try to wrangle a snapping turtle that weighed about as much as the baby on my back, with a diaper bag dangling in front of me (I still have to figure out how to load everything just right). So I took the lame pic with the turtle detained but not quite caught, and then let it go to burrow through the mud. 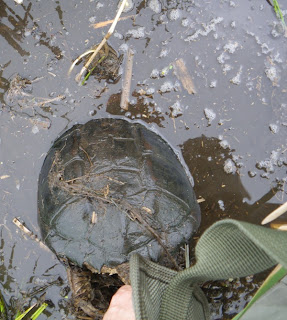 I had found it by kicking. I hesitate to call this a proper herping technique, but when you're wading/slogging through your favorite marsh, you need to stop and investigate any hard object you happen to run into. Most will be old stumps, maybe even a rock, depending on the substrate, but this one proved to be round (as I probed it with the handle of my potato rake - I hesitate to reach into the mud until I know which end is the head and which is the tail), not fixed to the bottom, and indeed a turtle.

Here's the tadpole update. They're fewer and bigger: 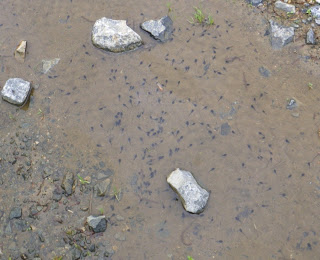 Another puddle held some just-hatching toad (Bufo americanus) tadpoles, still hanging out along the empty jelly of their egg string. 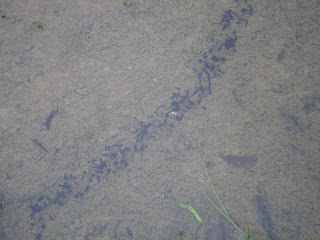 Posted by Bernard Brown at 4:57 PM No comments: 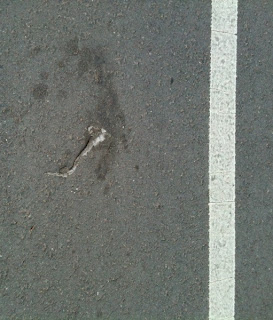 Nothing unusual about this scene: a road jerky garter snake (Thamnophis sirtalis), one that met its rubber-tire fate like so many others.

What's unusual is where I found it. Here's the 'habitat shot.' 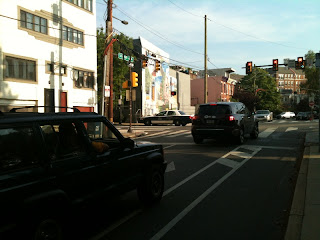 Some Philadelphians might recognize the intersection at the base of the South Street Bridge on 27th (what Lombard curves into). I was riding home from work, as I do nearly every day, and though I was riding fast and thinking about who knows what as I neared the curve onto the bridge, the forever-herping part of my brain pulled the brake lever. I hopped onto the sidewalk and took the photo. I suppose it came off the vegetation running along the railroad tracks at the edge of the river, maybe from the park. 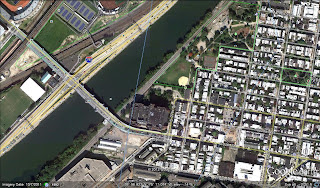 Railroad tracks are a classic setting for herping, where you'll walk along flipping old ties, but in rural settings, not in urban Philadelphia. Maybe I should give it a shot.

Posted by Bernard Brown at 7:48 PM No comments: 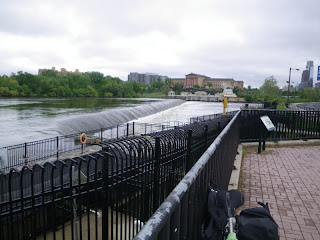 A week and a half ago I got to check out the fishway at the Fairmount Dam on the Schuylkill River. Note that I wrote 'fishway' and not 'fish ladder.' Sometimes it gets called a fish ladder, but this is more of a series of compartments lined up in a switchback and dropping a bit each one and looking less like  a ladder than some that you see out West, where the salmon can leap better than can our less-athletic shad.

The fish use of the fishway was fascinating, but of course I had to ask about the reptiles they see. Back at the Fairmount Waterworks Interpretive Center (the most underrated museum in the City) they have video of a northern water snake (Nerodia sipedon) using it. They see lots of red-eared sliders (Trachemys scripta) too, but what intrigued me were the spiny soft-shelled turtles (Apalone spinifera). These are strange-looking, flat turtles with long noses and, as you might guess by the name, leathery skin in place of their shell. They look like a turtle that melted a bit in the sun.

These are native to most of the rest of the country; they live in the Ohio River drainage in western PA, but the ones we have are descended from released turtles (most likely food turtles, not pets). They most famously live in the Maurice River drainage in South Jersey, but I've seen them in a creek in Bucks County, I've heard reports from the Delaware up around Easton, and I've seen photos of big females from the Heinz NWR. So it's not shocking that they'd see them, but still interesting, and tempting to keep me looking a little more carefully from the bridges over the Schuylkill and, I hope soon, from the Raftemys 2.
Posted by Bernard Brown at 7:33 PM No comments: