Maybe the season never ends. Maybe we'll keep saying, "this is the last nice day..." and the herps will keep proving us wrong. I sure hope so, but I hope so in the same way that I hope I'll win the lottery on Wednesday - I know it isn't going to happen, but it's an entertaining fantasy for a little while. In fact by now, when I've scheduled this post to run, we should have nights dropping consistently into freezing, keeping our cold-blooded friends safely underground.

On Saturday November 1st I joined up with Frank and Chris to herp a lovely track of land on the edge of the Pine Barrens.

You might wonder why I didn't head back to the mountains on Saturday, a sunny day with a high in the low 60s and great prospects for basking timber rattlers (Crotalus horridus) and black ratsnakes (Pantherophis obsoleta).

I guess the reason is those black ratsnakes, the ones that have kept me unhealthily obsessed with the weather where I think they might be spending the winter - some likely den sites up in the mountains.

It makes no sense that I'd be trying another place when place is probably not the reason I'm striking out with ratsnakes: I'm hitting good spots up in the mountains; I'm probably just profoundly unlucky. Still, why hit my head against the same wall when I can try another wall?

So, east I went instead of north and west. Frank and I carpooled and got to the site a few minutes ahead of Chris. I flipped some boards I'd laid out last year and quickly turned up an adorable pair of fence lizards. These aren't easy for me to catch when they're warm, but when they're cool in the morning like this they're a lot easier to grab. Once in hand, whether hot or cold, I've found that fence lizards freeze up - probably from sheer terror. 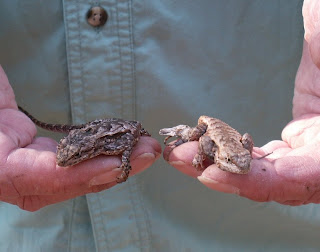 I love their texture. I know that's a strange thing to say about a lizard, but their pointy scales make for a very rough feel, like something made of the bark and pine needles they call home.

The female is on the left, with the sharper and darker lines. The male on the right has the more orange pattern. 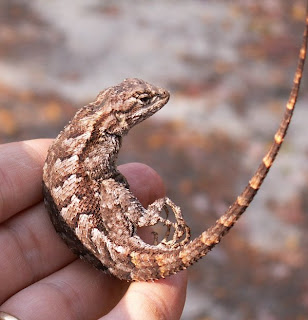 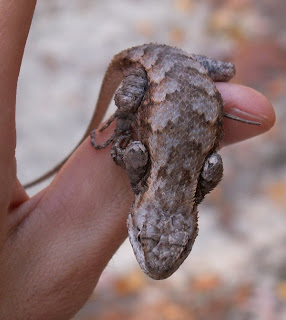 It's even easier to tell them apart when you flip them over to check their bellies. The male has blue patches on the sides, brighter than this in the breeding season, while the female's belly is just speckled with black: 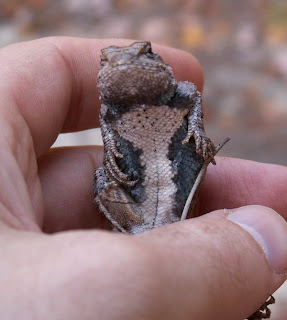 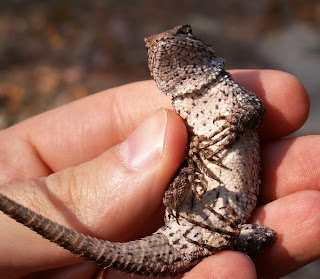 When you put them down they stay still a moment, and I don't feel quite right (worried they'll get picked off by a hawk or something) until I tickle their tails to wake them up and get them to scurry off under cover again.

We struck off on a walking route for the next few hours, basically checking all the places Chris had ever seen ratsnakes or pine snakes (Pituophis melanoleucus) late in the season or early in the spring, trying to see if we could find a hibernaculum.

We had no luck, but we did come across a couple box turtles basking in the trails. It's never a bad day when you find a box turtle, even if no ratsnakes turn up. Finding two on the first day of November was truly a pleasure, even if I still haven't found any ratsnakes. 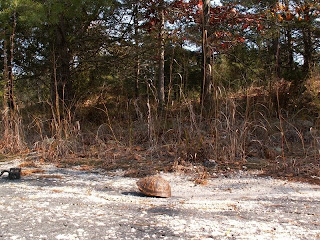 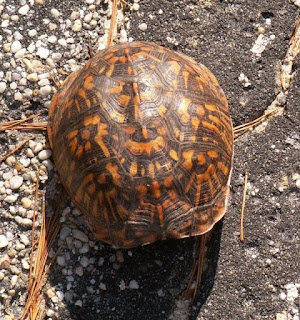 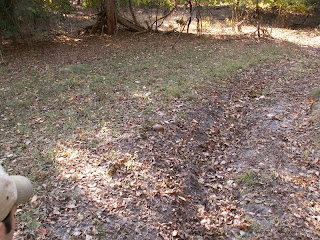 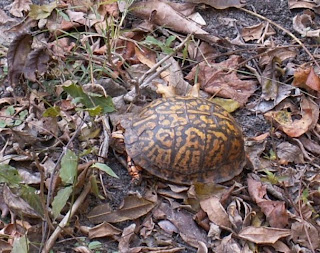 Posted by Bernard Brown at 4:19 AM No comments:

On Sunday October 26th, the day after my birthday and way later in the year than I ever thought would be worth herping, a sunny day brought me back out. I was incredibly tired, having stayed up late the night before watching the Phillies win game three of the World Series at nearly two in the morning (Carlos Ruiz is the man - why the Rays loaded the bases for someone who was, at that point, the only Philly hitting the ball reliably, I'll never understand, but I'm delighted they did it), but I hopped in the car and drove out to Upper Roxborough to the spot where earlier Scott had found a road jerky milksnake (Lampropeltis triangulum). I poked around and scoped out a stone wall where I'll bet you they're hibernating, but I didn't see any.

I ran into a nearby homeowner, and I asked her about milksnakes. In this case I didn't even have to knock on her door (she was outside giving the business to a guy riding up and down the street on a loud ATV), but never be too timid to do this. Asking someone to herp on their property is a bigger deal, but I have yet to find someone who wouldn't tell me what kind of snakes they see in their back yard. Even in Philly, a notoriously unfriendly city, people open right up to talk about the little baby garters they see in the garden (usually those are brown snakes - Storeria dekayi). As for this homeowner, I'd been hoping for an answer like, "oh, they're right over there," but unfortunately this particular homeowner hadn't seen any milksnakes - just garters (Thamnophis sirtalis).

When I recounted this story to Scott, he pointed out how many different kinds of snakes lay people assume are garter snakes, but I had described milksnakes in a lot of detail and I'm pretty sure they hadn't seen any. Let this also be a lesson in the secretive habits of milksnakes. We know they live (and die) half a block away from that house, but the neighbors had no idea.

I took off for another area to herp for milksnakes, but had no luck there either - just a few redback salamanders (Plethodon cinereus) and this American toad (Bufo americanus). I guess I should hype this toad - all I've been posting lately have been brown snakes and redbacks, and it was a genuine pleasure to see this toad, with its beefy forearms, hopping across the newly fallen leaves on the forest floor. 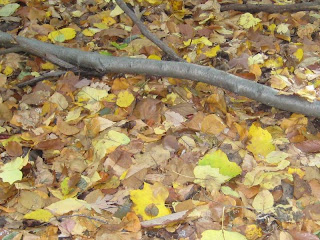 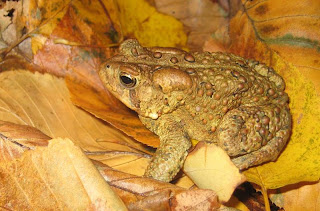 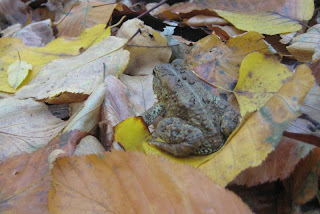 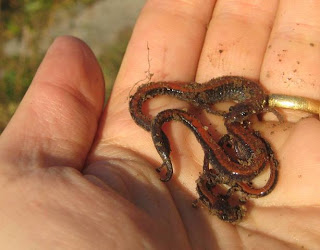 I decided to wrap things up at the Mt. Moriah Cemetery, where I found one beat-up adult male brown snake. It now occurs to me that this is a really crappy photo to show off an interesting critter, but I'd like you to note a couple things - first, dig that big scar towards the base of its tail. It had several more scars on its belly and back down its tail. You never know exactly what scars are from, but I figure this brown snake was lucky to get away from something, and it then recovered from some really ugly wounds. 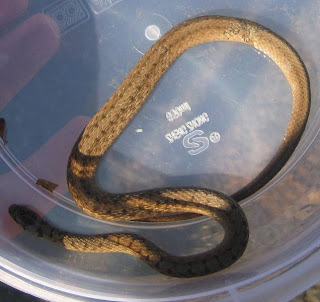 Also note the pattern on the back - the little bars connecting some of the dots. These bars are within the usual range of variation for our brown snakes (the northern subspecies), but if you connected a few more of the dots, you'd have the pattern of the subspecies from the South and Midwest - the Midlands brown snake, or Storeria dekayi wrightorum)
Posted by Bernard Brown at 5:04 AM No comments: