Nothing I've experienced is so much like flying as floating down the river facing down. I study the rocks scrolling along beneath me framed by my mask and, if I've chosen my course well, I only occasionally have to swerve to avoid a snag or double back to check the downstream sides of boulders. The more I think about it, I might be as aquatic as I am terrestrial. I feel at home in water, completely unafraid of the current or the 71 degree-surrounding temperature efficiently leeching away my heat faster than I can generate it (in other words it's good I bring buddies to keep an eye on me). I don't so much care that I'm not seeing any turtles. Of course it's still a thrill when after an hour of going down the river (and then repeatedly swimming or wading back up - not as much fun) something that's not quite a rock passes beneath me and I have to put on the brakes and dive.

All these photos of common map turtles (Graptemys geographica) are Eitan's from our Labor Day trip to the Delaware north of Trenton.

First, here's the male I found. 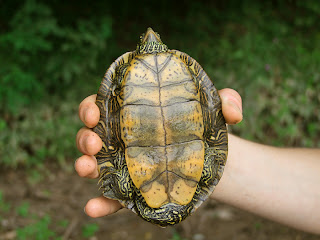 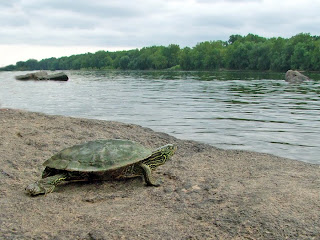 Here are a couple shots of the female - one of her getting away in the middle of a photo session. 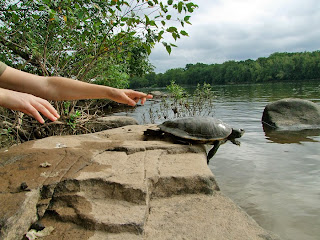 Here I am gazing lovingly at her. 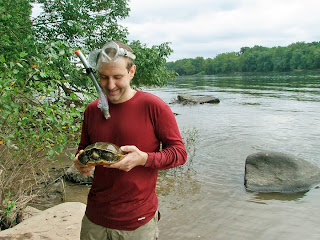 Here they are together - the male on top. Notice the size difference? The official term is sexual dimorphism - the males are a lot smaller than the females, but they also have different heads: the male's is narrower for a lighter diet of small critters like minnows and insects; the girls have broad, crushing jaws for clams, mussels, and snails. 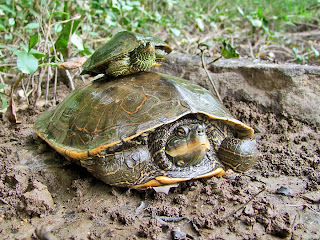 I'll end with a shot of Jen in the river. I hope it captures some of the peace of the setting. I don't care what people say about the Delaware; it's a beautiful river and a divine place to spend an afternoon turtling. 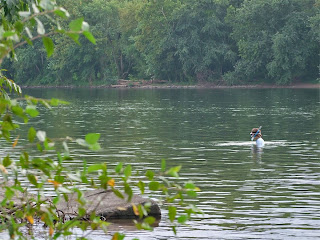 I've been wondering about map turtles (Graptemys geographica) in the Schuylkill for a little while now. In a way that is stupid; they've been documented as far up as Valley Forge, but I've still wondered if they're just out in a couple little spots or if they're as widespread as they are in the Delaware.

Map turtles are not quite native here. They live quite naturally in the Susquehanna River system, but apparently weren't living in the Delaware system until the middle of the 20th century. I assume they've spread up the Schuylkill from the Delaware (they've been documented at the Heinz NWR near the meeting of the two rivers), but that would be hard to say for sure.

Red-eared sliders (Trachemys scripta elegans) are certainly not native. These hardy, attractive turtles are from the Mississippi river system but their popularity as a cheap, throw-away pet (you know those itty-bitty green turtles with the red stripe on the head you see at street fairs?) has spread them all over the world, the Delaware Valley included.

You can see a lot of them from the Falls Bridge over the Schuylkill (just upstream of where I waded in and grabbed one a few weeks ago - see below), and on Sunday (Sept. 6th) Scott, Miles, and I stood on the bridge with binoculars, watching lots of sliders bask and swim, trying to pick out a map turtle. Scott won the contest, and as we passed the binoculars back and forth we confirmed that one of those turtles was not like the other. It had an indented rear edge of its shell, a lighter shell color, and a different pattern of yellow lines on its head. It was way too far out for a decent photo, but on my way home I rode over the bridge and got a shot of both species basking together. The big turtle is the slider, but there are two smaller turtles with proportionally smaller heads right in front of it on the log, both map turtles. 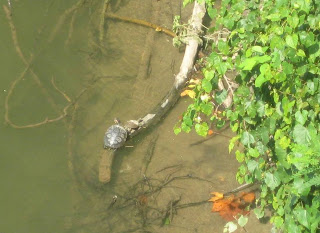 Posted by Bernard Brown at 6:42 AM No comments: