This year, in place of the usual fall timber rattle snake (Crotalus horridus) posts, I present you a post of places I thought I would find rattlers but found none.

I got skunked on my last couple trips. I got skunked bad. I wonder if I have offended the snakes somehow. Should I sacrifice some chipmunks?

I started with one favorite rattler hillside on weather that should have yielded at least a few snakes hanging out and basking, and I found only rocks on a beautiful mountain.

Last weekend I went out again, this time to a more reliable site, in early October just like in past successful trips and in weather conditions practically identical to those trips. Again I found nothing. At least it's a nice place to spend a day wandering around finding nothing. 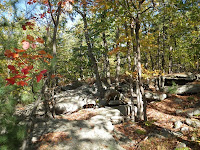 Here's a rock pile where we found a nice black rattler two years ago: 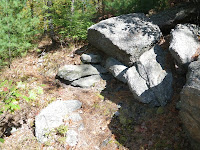 Here's the snake that was there two years ago, but not this year: 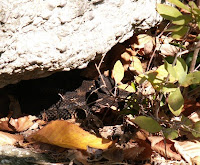 Here's a slab that had sheltered a snake a year and a half ago in the spring: 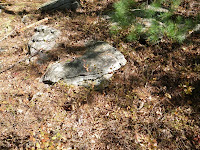 Here's the snake that wasn't there this time:

Here's the snake Eitan and I had eaten lunch next to a couple years ago: 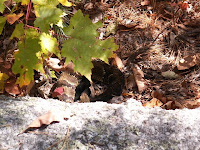 Here's the same slab without it: Here is the view this year: 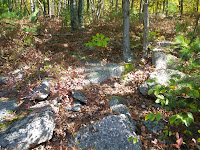 Where a couple years ago we had seen this guy basking: 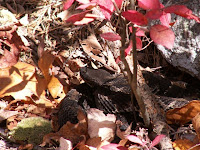 Sometimes we flip small snakes under rocks along the trails. 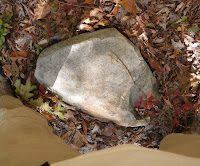 Not this time! Meet the termites. 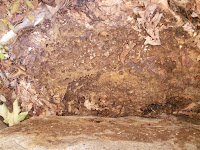 I did find some tea berries to munch on as I struck out. These guys have a slightly starchy texture, but taste a little minty, like wintergreen oil. 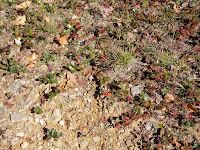 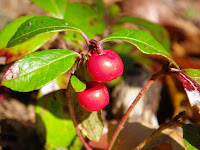 Eventually I gave up and tried a new trail. It ran through some dense woods and rhododendron thickets along a gorgeous stream, with clear water babbling over a sand and rock bed. 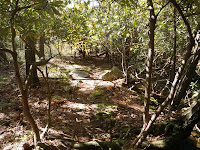 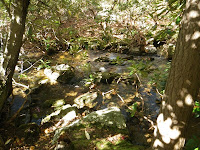 I was letting the peace and beauty ease the pain of not finding my beloved rattlers when I saw something slithering across the trail. It was a small garter snake (Thamnophis sirtalis), and of course I dropped to the ground to grab it. Lest you think I'm some kind of heroic Steve Irwin-style herper, rest assured that I botched the move. I grabbed the snake, but the inside of my right knee cap nailed this root sticking out of the otherwise flat trail. 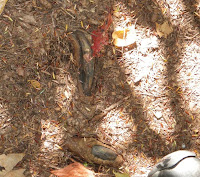 I kept my hand on the snake while I shouted obscenities at the root (if I had an axe...) and then tried to take some photos of the snake. That didn't work out so well - the dappled light messed with my camera (or more likely exhausted my patience), and the snake would just not sit still long enough. Here it is calm after I'd held my hand over it for a moment. 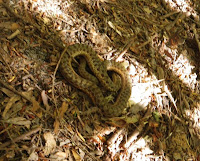 Here I am trying to hold him in place long enough for a picture. 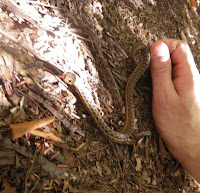 That's a lot of photos of an uncooperative snake, but I'll credit the little guy for saving an otherwise herpless trip. (later I saw some wood frogs - Rana sylvatica) and sweetening an otherwise sour end to the fall season. Thank you, garter snake. I owe you a night crawler.

Sorry for the very long lag in posting - here's a quick note before I put up something about actual herping tonight.
See the new Grid for a piece I wrote about our beloved, omnipresent red-backed salamander (Plethodon cinereus). From this link go to page 13:
http://www.gridphilly.com/digital-edition/november-2010-020.html
Posted by Bernard Brown at 5:33 AM No comments: