Sometimes as I write these posts, I wonder why I describe observations of the same critters in the same habitats year after year. To me it all seems new - any time I find, say, a spotted turtle (Clemmys guttata) it's a special and memorable experience - and the experiences deepen as I layer on the observations over the years, both as I can better distinguish what is different from what is normal (see something once, it's hard to tell) and as I develop a gut feeling for the annual cycles we play in - but reading the blog it can look like I recycle the same posts year after year.

What definitely changes is the social. Most obviously, I now herp with a baby. At six months she seems to devote most of her free mind to sensation, to intently watching scenery and people, to following new sounds, to touching and placing into her mouth new objects as her brain wires itself for a sense of the world we adults take for granted. I feel it is critical that the scenery and sounds are as outdoors as they are indoors, that her brain be imprinted with the waving green of marsh grasses and the sounds of birds in the wind, and, of course, that she run her hands over the shells of turtles so that the texture is as normal to her as the fuzzy baby toys she spends more time with.

I'm not the only one - of course I hang out with like-minded people, and last week we drove out to a marsh in New Jersey to find nesting diamond-backed terrapins (Malaclemys terrapin) and hand them over to our children.

This is easy herping, essentially road cruising. Ordinarily I look down on road cruising, but in this case it is the simplest way to find the nesting turtles as they cross the road or stop to dig nests alongside or in the road.

Jen, Magnolia, and I showed up before our herping buddies and drove around a bit. We saw a few freshly-dug test holes - female terrapins tend to dig several holes and abandon them before they lay their eggs in one, so we felt confident we were in the right place at roughly the right time. We saw a few nests that had been ruined by predators, with shriveled shells littering the ground next to the holes, but no terrapins. 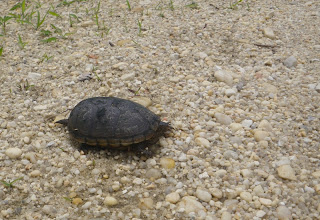 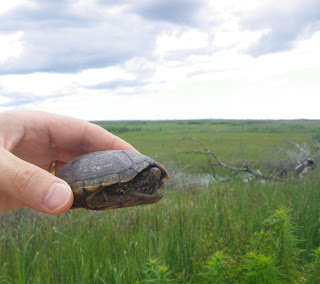 These aren't nearly as well regarded as the larger, more objectively beautiful terrapins, but I find the little guys charismatic in a similar way as stinkpots (Sternotherus oderatus). I would have figured on females crossing for the same reason as the terrapins, but a couple of them were males. 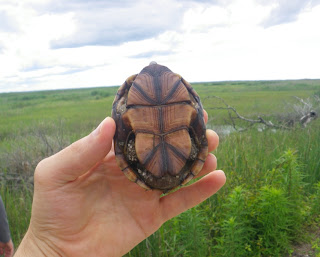 Finally we saw a girl digging a hole. I didn't get too close, not wanting to spook her, but I could see something was funny about her right front leg. 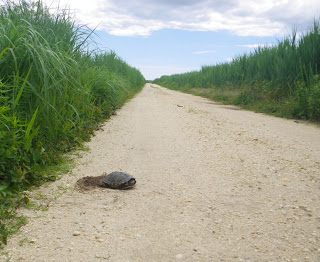 We met up with Scott and his son Miles, as well as Ali (a plant person, but we let her tag along) and her very new baby, and we all piled into our car.

A little while later we found the same female, distinguishable by that stump leg (I am horrified to imagine how that must have looked when it was first injured) crossing the road, and we tortured her for a few minutes by letting the kids touch her before letting her continue searching for that perfect patch of ground to lay her eggs. 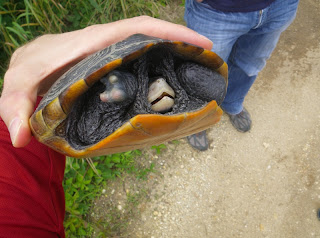 As we were with this delightful (to be fair, he was terrified) little mud turtle that we detained for a few minutes for a photo shoot. 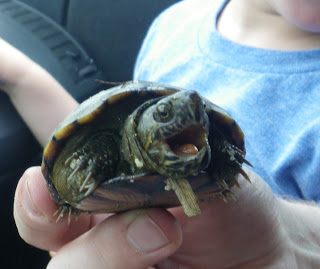 Posted by Bernard Brown at 8:44 PM No comments:

A week and a half ago I finally got out on my own to the mountains. To be clear, I have been delighted to take Magnolia out with me in search of reptiles and amphibians, but on this trip I reminded myself of how fast I can move on my own, how much more ground I can cover on my way across a mountain, how more nimbly I can hop boulder to boulder (one of my favorite activities). 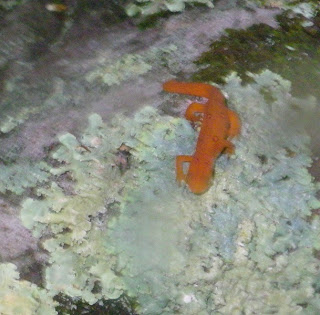 On the way through the woods to the open areas with the rattlesnakes (Crotalus horridus) I found some beautiful, though not-at-all nimble, efts moving in their slow motion across rocks and logs. I guess I didn't check to see whether there was any water actually on the lens of my camera before I took the shot, so please excuse the blur. Efts are a terrestrial life stage of the red-spotted newts (Notophthalmus viridiscens) we so often see in slow, shallow water. The newts hatch out into aquatic larvae, spend a few years as terrestrial efts, and then return to the water as adults. Aside from their garish beauty, their slow, methodical pace makes them fun to observe (and catch). Their bright colors signal toxic skin secretions; they don't need to move fast, since not much would want to eat them.

I made it to the rattlesnake site ahead of time, it turned out. I had worried about the sun heating the rocks up too quickly, but I found no snakes sitting out to greet me when I arrived. I took fifteen minutes to sit, rest, and wring out my socks and insoles, which had soaked up quite a lot of dew on my hike through the woods. Still no rattlers.

I got up and explored elsewhere on the slope, but made it back in about twenty minutes.

Finally! Here was a snake sitting out in the sun just as I had expected. 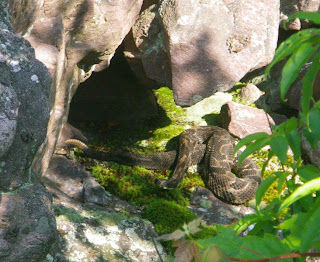 She wasn't alone for long. I spotted this one crawling over the top of a neighboring rock. 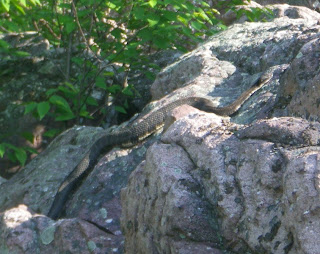 And a few minutes later this one poked her head out and curled up alongside. 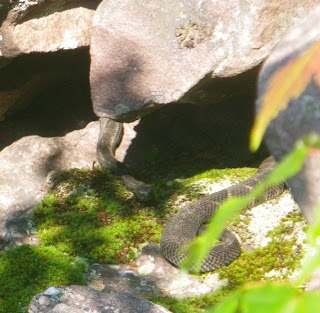 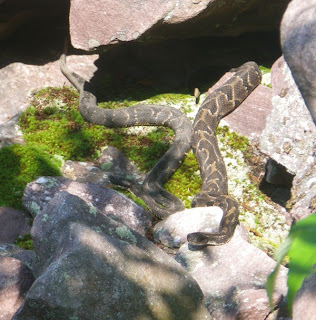 These are likely pregnant females, which spend the summer basking in open areas while their males and not-pregnant sisters spend their time hunting.

I checked out a nearby spot, where I found a couple rattlers; one was sitting pretty and soaking up the sun. The other, apparently warmed up already, was nosing around the edge of the boulder, apparently looking to coil up half-shaded in the bushes. This one in particular was a stunning snake, the velvety black edged with cream and russet. Some herpers may prefer the blondes, but I can't get enough of the black rattlers. 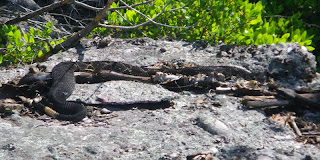 More of the mountain awaited, so I hiked around to explore for a couple hours. On my way by the first basking site, I found this sight: 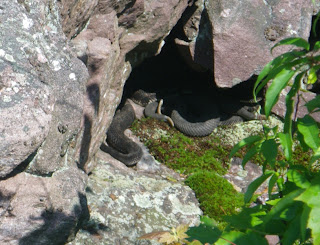 This is why you generally don't find timbers in really sunny weather unless you already know where you're looking. They might leave a coil or two out in the sun, but the keep the rest of themselves tucked back in the shade.


Posted by Bernard Brown at 7:32 PM No comments: