Nothing cold-blooded is moving at 25 degrees, even in the sun. All of us herpers north of Florida have to confront the lack of action in our own ways, but I submit that winter is best spent doing two things: scouting and laying boards.
Scouting is what it sounds like - exploring new locations where we might find critters, ground proofing promising spots on the map, and imagining what might be walking through that water or dragging itself through the mud once the mud has thawed and shed its top two inches of ice.

Laying boards might be new to the birders and general naturalists out there, but it follows from a rather un-natural fact of herping: Trash is good. There is little that makes a herper as happy has finding a barn collapsing in an old field, with boards and roofing tin scattered about in the high grass. Any one of those boards could hide any of a number of lizards, snakes, and (depending on the moisture underneath) frogs, toads, and salamanders. The same can be said for old mattresses, abandoned cars dropping body panels, or old pieces of carpet. There is fun herping to be done in pristine habitat, but we secretly (or not so secretly in this case) love illegal dumping. When we find that disorderly heap of roofing shingles off a dirt road, we make sure to do what the litterbug should have done and arrange them to provide optimal herp cover.

It doesn't take too great a leap of creativity to start laying out your own similar debris. In the world of professional field herpetologists, intentionally distributed boards are called 'cover board arrays,' though we amateurs usually refer to them 'board lines.' All you need is a cooperative land owner and some old debris, and you can get started.

My herping buddy Scott and I have developed that kind of strong relationship with a local landowner in the woods/farm/subdivision country to the west of Philadelphia, and for a second winter we are scouting and laying out boards.

We're targeting a couple snake species with those boards. One is the somewhat common eastern milksnake (Lampropeltis triangulum), a snake we've found in other board lines before. A few years ago Scott had very industriously distributed some boards and tin sheets that he had found discarded in a field in north-central PA. His hard work paid off. Indeed in a total of twenty minutes over two mornings in the September of 2007 we flipped three milk snakes in addition to a black racer (Coluber constrictor), and a ring neck snake (Diadophis punctatus). 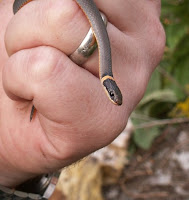 I love milk snakes. These are shiny, strong snakes that end up modestly patterned with brown blotches on a beige or gray background... 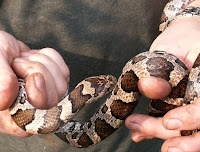 ...but start life with red blotches on a cream background. Here's a half-grown milk snake we found last summer, near where we laid boards on January 31st:

We're also interested in finding copperheads (Agkistrodon contortrix), a widespread pit viper species that appears to be in decline in Pennsylvania. The land owner has reported them from a section of rocky upland woods and field, but we haven't seen them yet. It would be especially nifty to log these and make an official record for the folks who track our sensitive herp species (check out the PA Herp Atlas Project).

Of course copperheads are beautiful in their own right and would be fun to find even if they weren't getting scarce. Here's a nice one my friend Eitan photographed en situ in the mountains: 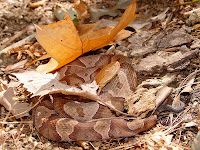 So, on the morning of the 31st we were ready to scout some nice marsh habitat and lay boards in the uplands. First, though, we needed boards. Scott had some in his back yard that he'd been saving for just this occasion, so we started with those in the back of his Subaru:

Next stop, Ikea! Ikea? Yeah, I wondered the same thing, but Scott reported that he had seen a pile of extra boards (unneeded furniture parts) for really cheap at Ikea on a previous trip. When we got there and had finally woven our way past the glassware, rugs, and light fixtures to the spot near checkout where Scott remembered the boards, we found... no boards. The friendly Ikea attendant informed us that the boards are available at the END of the day, so we made the best of the situation and stocked up on little chocolate cream cookies and lingonberry concentrate.

Our friend the landowner had reported a large stockpile of boards left over from renovating a building on the property, so we had more to work with than just what Scott had stockpiled in his back yard. The ground was frozen and snow was still on the ground, but that makes no difference for board laying:

Boards can take a while to settle down, attract rodents, and become part of the yearly routine for the neighborhood critters, so these might not pay of this spring and summer, but we figure they'll start yielding finds within a year and a half.