Sometimes everything works out like I plan. It doesn’t happen often, but when it does I feel like a genius, exclaiming to all the rocks and trees how heroic a herper I am (never mind the failed trips that far outnumber the triumphant successes).

Jen and I were up at my cousin’s cabin in the mountains of Upstate PA, enjoying an overnight trip of lots of laziness, good and inexpensive ice cream, and a little canoeing. Of course I can’t go anywhere without scouting the place out on Google Earth beforehand, so I’d done my research, locating a nice, rocky, south-facing ridge close to the cabin, complete with a handy right-of-way for access.

The weather started off misty and cool that morning (good funeral weather maybe), but I reminded myself that it would probably clear soon, and that either way overcast skies aren’t necessarily bad for finding basking snakes.
The hike up the mountain ridge went pretty smoothly, fueled by an abundance of wild berries. I can’t say I moved as fast as I’m capable of moving, but my slow advance through the thickets of blueberries and blackberries was delicious. I stuffed my face as I went, thinking to myself, “gosh, I bet the bears love this place.”

[Note that I had a hard time photographing berries, the problem being that I kept eating most of the berries off the really photogenic bushes before I could get out the camera.] 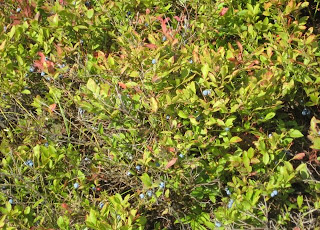 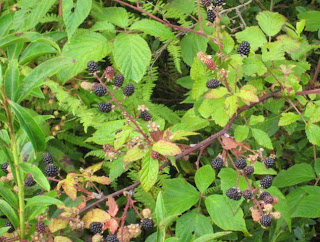 Not too long after that prophetic inkling, I raised my head (the closer the distance from berries to mouth, the better) and heard a mighty crashing noise just as I saw a black bear take off away from me, running with shocking speed, albeit completely lacking grace as it rocketed through the underbrush into the tree line at the edge of the right-of-way and beyond.
This has been my experience with black bears. I usually scare the living daylights out of them (humans hunt them, of course), so there’s no need to be too scared of them, but usually no chance to take a photo either.
What actually did concern me a little was a heavy rustling and crashing-about deep behind a wall of bushes to my other side, maybe thirty feet away. I’m pretty sure another bear, maybe a cub, was in there and staying put, however much a clapped and yelled to try to flush it. I scampered up the trail, conscious that however timid bears usually are, I didn’t want to stick around between a bear and her cub.
I did get a photo of bear poop (not technically in the woods, come to think of it) as proof of what I’d seen, and that they’d been feasting on the berries, judging by all the seeds. 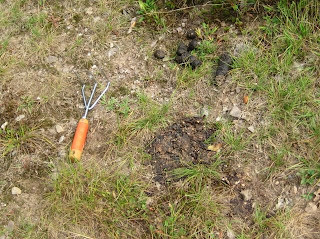 I saw four such piles of scat on my way up the ridge, and even though I must have looked like an idiot clapping and hollering each time I went into a blind curve in the path, I kept at it, determined not to surprise a bear too close for comfort. 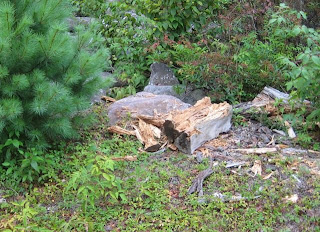 So, bears behind me, I scrambled over unruly piles of boulders, more rock-climbing than hiking at points, and the sun did come out when I was somewhere in the boulders. Here are some shots of the terrain. 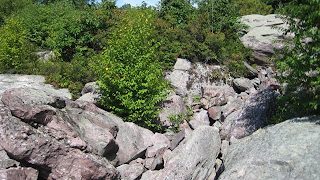 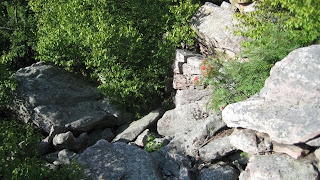 As I got to the top I noted the nice small cliffs and outcroppings around me, both in the right of way and to either side. The ones to either side were actually a little nerve-wracking to approach, since I had to wade through blueberry bushes that could quite easily have been hiding rattlers from my view. Timbers tend not to strike unless you’re right on top of them, but for a few stretches I had no way of telling where they were until I put my foot down.
I did not get tagged, thankfully, but I did finally find the right little ledge. I can’t say I spotted the snake; rather I heard the frantic buzzing of a scared rattler, looked to my left, and there she was.
I whipped out the camera and got in a few pictures and a quick video (here it is so you can hear what their rattling sounds like).

I backed up a few steps to give her some space. I didn’t want to ruin her day of basking. Dig her fat rear end in the photos below, consistent with her about to give birth. This is the right time of year for that too, and her basking in the open is also what you’d expect of a gravid timber rattler, 'cooking her babies' to use the elegant herper expression.
As I took out my GPS unit to record the location and my thermometer to check the air temperature (high 60s), I saw her pause, make a slow U-turn, and return to her original spot. I hadn’t backed all that far off where I’d been when I first spotted her (from less than ten feet away to maybe fifteen feet away), but apparently that was enough room for her. We were in plain sight of each other – no missing me from her perspective – so I figure she didn’t care about me standing there as long as I respected her personal space and didn’t make any fast moves.

Here’s a series of shots showing her retreat and then return to her basking spot. 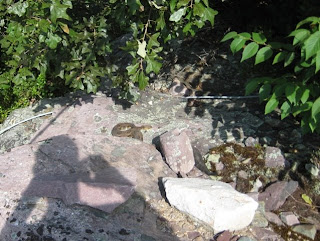 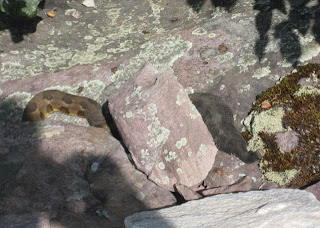 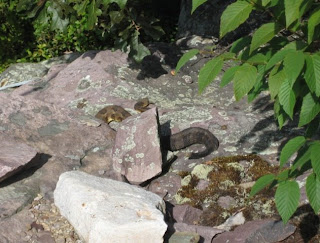 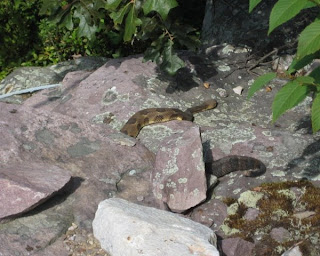 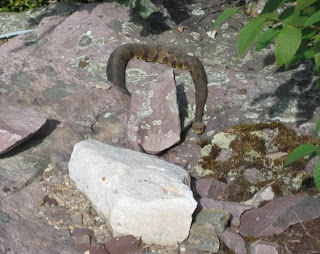 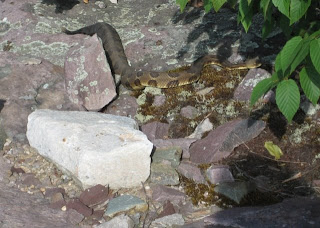 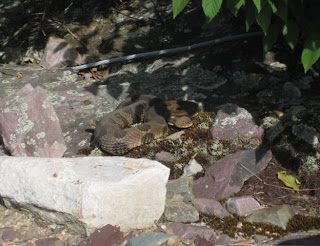 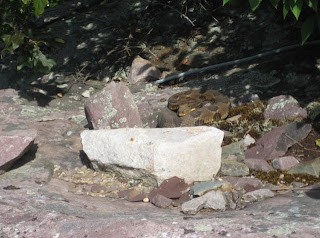 I could have stayed there all day. There’s something magical about a big timber rattler, and it’s so rare that any snake just sits there in the open and lets you look at it. It seemed like a waste of the experience to leave, but I was already late to rejoin Jen and our cousins. So, I bid farewell to the majestic mother-to-be and headed back down the mountain.
Posted by Bernard Brown at 7:09 PM 1 comment: