I’ve decided that the road to summer herping happiness is not asphalt or even country gravel; it is a creek full of turtles. Conventional wisdom in my circle of herping buddies is that when it gets really hot and dry, the only herping really worth your time is road cruising. As I have amply described on this blog, I have not been overwhelmed with my road cruising success. I have been tickled pink, however, by my turtling success.
Last week through Saturday looked a lot like the previous week. I was in South Jersey for work on Wednesday, so I stuck around after my last meeting and I did some dusk cruising around a great black rat snake (Pantherophis obsoleta) area. I didn’t find any (otherwise I would have decided the road to happiness indeed was a dirt road in the country), contributing to my sense that I’ve done something to offend the rat snakes and they’re all avoiding me. (If any black rat snakes are reading this, I implore you to please email me and let me know how I can make things right. I miss you.)

On Saturday Jen and I went for a walk/run in the Woodlands Cemetery, and I think we found the same garter snake (Thamnophis sirtalis) as last week. It got away before I could grab it and check the tail (the difference between flipping a snake at noon when it’s warm versus 8:00am when it’s cool), but I suspect it’s the same one.

The big development, however, was the arrival of my new turtle trap (technically a Promar crab trap – looks like a cross between a snow shoe and an accordion) in the mail from Cabella’s. One of my most trusted herping mentors has been urging me to get one of these traps for a long time. It’s the kind of thing you can bait and set first thing in the morning and come back to check at the end of the morning, or the next morning if you want to be really thorough. Scott and I got some experience with this model when we helped out on some spotted turtle trapping a little over a month ago. It’s a great way to trap smaller turtles, especially in settings where it’s difficult to find and catch them by hand.

I’ve got both PA and NJ fishing licenses, and I should be clear that I’m not keeping anything we catch; this is just a tool to see what else is in there besides what we can see. As far as I can tell in Jersey I wouldn’t be breaking the law even if I did keep painted turtles (Chrysemys picta) or snappers (Chelydra serpentina), and I have yet to investigate the PA situation as thoroughly, but I think I’m safe there too.

So with that disclaimer out of the way, here’s what I did on Sunday: I drove down to another spot in Jersey that has soft shell turtles (Apalone spinifera). 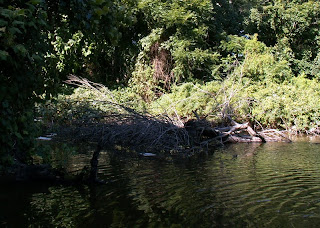 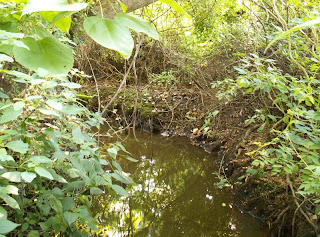 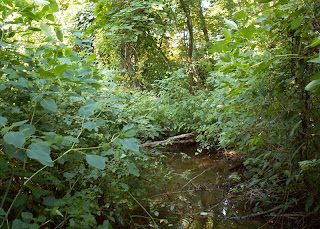 I spent about an hour and a half slogging around a creek that was a lot less navigable than I had anticipated and set the trap in two successive spots in the meantime. I basically gave up on walking around and looking by hand because of the difficulty I had moving through the vines, briars, and downed trees over the creek. I saw a few stinkpots scampering about in the creek around me. A little gathering of stinkpots scattered when they saw me; I've heard of this kind of behavior before. I'm not sure if they were feeding on something that attracted them all together or if they just hang out like that sometimes, but I hope to observe more groups like this in the future. Here's an adorable little one that’s probably a yearling. 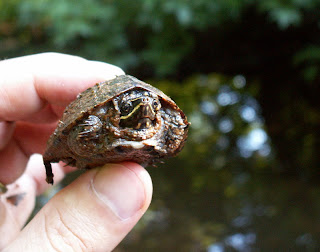 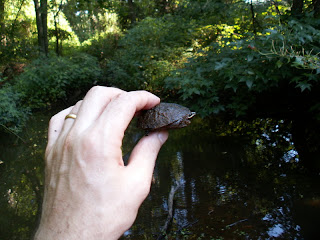 I really wasn't sure that I'd find anything at all. When we used these traps in the spotted turtle project we left about twenty traps out twenty four hours, and not all of them had turtles in the morning. However when I came back to my new trap after the first session I could see something moving around in there, so I was figuring I'd gotten lucky - at least one turtle was in there. 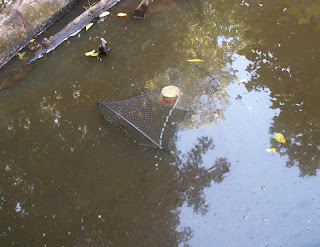 I pulled it out of the water and was pretty impressed to see this pile of turtles. None were the targeted soft shell, but nine turtles in an hour is scarily productive. I get the giggles just thinking about it. How many would have piled up if I’d left it a full day? 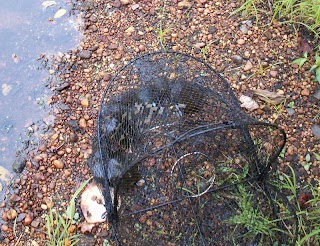 Here are some shots of the turtles. 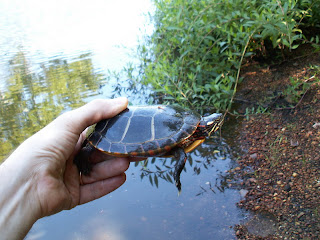 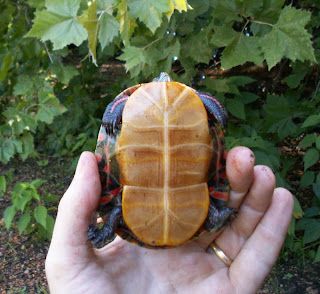 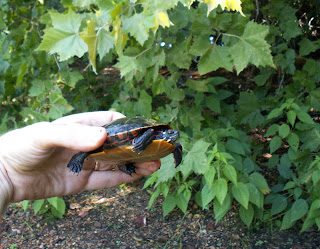 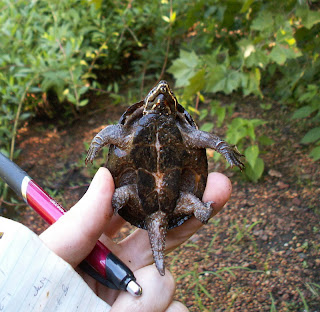 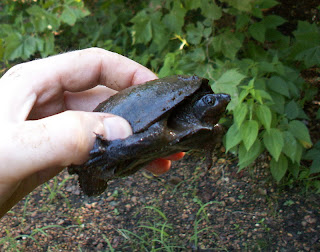 Here's a painted turtle that looks like it once tried to steal some bait off a fish hook. 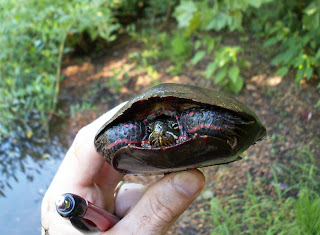 Here's a stinkpot with a hole in one of its marginal scutes. I'm not sure if this is accidental damage or a mark from a study. It's a little bigger than a notch a biologist would make, so I'm betting it's an old injury. 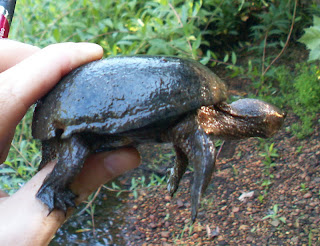 It was actually a little tricky processing them. I wanted to at least jot down the size and sex of each one for my tallies, but each time I opened the trap one or two tried to make it out. One stinkpot did succeed in making his or her getaway. I guess I could have hopped over and stopped it, but there was something really cute about a three-inch turtle trucking as fast as it could for the water, so I just watched.

In the second session I ONLY came up with seven. Again it was just stinkpots and painted turtles, but still a nice demonstration of the power of the turtle trap.

I did some scouting after that to check out what looked from satellite to be a nice cluster of vernal pools. I did find some nice territory on the ground, but more importantly I demonstrated why scouting is best done in the winter; you can’t see more than ten feet in front of you with all the vines and leaves this time of year. Of course some of that nice territory I found includes a nice marshy section of a stream, something I could set the trap in…

One extra tidbit: On a whim I wrote a little essay about my brown snake spot on the PIDC land that got bulldozed last fall. I sent it to the Inquirer, and they ran it as a commentary piece. Here’s the link: http://www.philly.com/inquirer/currents/25953179.html
Posted by Bernard Brown at 12:24 PM No comments: