If Philadelphia has a wilderness, it is probably in the Northwest of the City. Up there we've got the enormous (1,400 acres, seven miles long) Wissahickon Valley section of Fairmount Park, the old reservoir in Upper Roxborough, and the Schuylkill Center for Environmental Education right across the street from the reservoir. Of course as soon as I typed that I thought of the tidal marshes along the Delaware and Schuylkill, especially near the airport and the Heinz National Wildlife Refuge, so if Philadelphia has a piedmont, mixed-woods wilderness...

A week and a half ago I took a herping date as an excuse to explore the amphibians of northwest Philly on a quick after-work trip. Dusk was getting duskier, offering poor light and spurring us on to the next location before it got too dark to see, so please excuse the hurried, crappy photos:

Speaking of dusk, we turned up some dusky salamanders (Desmognathus fuscus) in the back yard of a friend. His back yard looks out on (or includes - not sure of where the line was) a wooded slope with a couple springs seeping out of the ground and joining into a cute little rocky stream. We worked our way up, flipping rocks and taking photos of what we found.

Here's a one-clawed crayfish Mike turned up. A raccoon survivor? 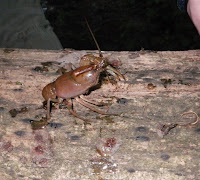 Here's a grown up dusky (for scale, note that these were taken in a cutoff two-liter soda bottle): 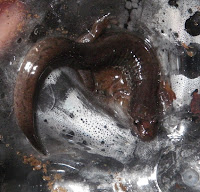 ...and here's a really teeny tiny larva. Note the external gills you can just see at the ne 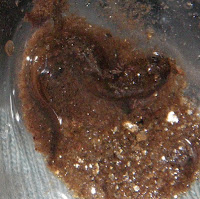 We stopped by the reservoir to visit with the Toad Detour folks and got to see some of this year's toadlets hopping across the road.

We finished up over at the Schuylkill Center. We checked out their newish (since I was last there, at least) pond by the parking lot, which had about as many green frogs (Rana clamitans) as I could imagine, both adults plunking away at each other and recent metamorphs crawling out of the water. Here's one of the grown ups. 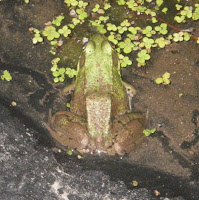 Posted by Bernard Brown at 4:59 AM No comments: