A couple weekends ago (April 8th through 10th) I played hide and seek with a group of northern water snakes (Nerodia sipedon sipedon) in Virginia. Whack A Mole might be a better description, but I don’t want to give the impression that I was whacking them.

A couple we’re friends with (Marc and Katherine) invited us down to Marc's aunt’s house on the water at the tip of Virginia’s Northern Neck. This is the tiny peninsula that sticks out and forms the southern corner of the Potomac’s mouth into the Chesapeake. The landscape there was flat farms with the occasional patch of forest, all edged by new vacation houses on the water. 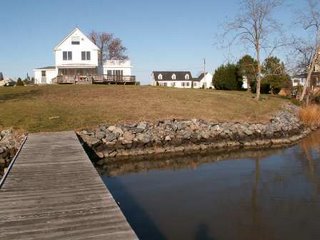 We arrived on Saturday, and we mostly sat inside watching the rain fall. Marc reported that he had seen a snake crawl across the dock outside. I perked right up, but he’s terrified of snakes so I couldn’t get any good details out of him – he had just turned and walked away.

I figured that he had seen a northern water snake. These are heavy-bodied snakes patterned in dark gray and dark reddish-brown bands. They lose the pattern a little as they age, and big ones, especially big ones that are covered in a layer of mud, can look a muddy gray. These are really common snakes, and you can often spot them basking next to water (rivers, streams, lakes, ponds). They’ll plop right in as soon as they see you. Be careful if you decide to catch them; they're harmless but are notorious for being mean and stinky – they bite and spray feces and musk to the point that I usually just let them sit there. This time I guess I was bored with the rest of the herping opportunities, so I made it my mission to catch one.

The next day I spotted at least two of the snakes. They were basking among the rocks along the water. I’d spot them, they’d spot me, and they’d quickly head deeper into the rocks where I couldn’t grab them. This happened over and over again. There was one little, more strongly patterned one whose position I thought I had memorized. I fixed the location and then an hour later crawled up and quickly popped up and grabbed at where he should have been. I did that twice, but each time he was one or two rocks over from where I had remembered him.

Monday was our last day. I missed my little guy again, and as I gave up on my mission I walked further along the rocks to see if there were any others. Oh! One more, a big one too, but I missed it. I took another few steps, and this time I didn’t think, I just lunged and grabbed the third snake as it dove into the rocks.

After a brief tugging match (steady, gently pulling) I had my snake. It was pretty cool to the touch, and I credit its early morning torpor with its unusually placid response to my grabbing it. All it did was flatten its head and sit there for a minute - no biting, no spraying musk and feces. 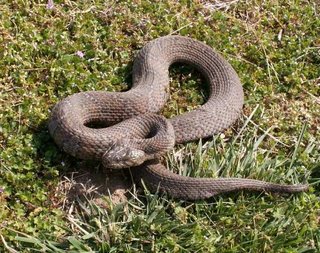 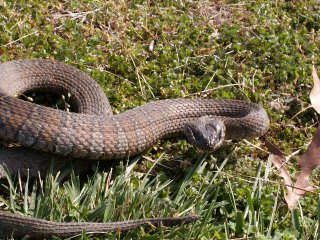 Here’s another picture showing a little of its belly pattern. 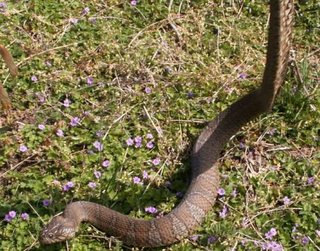 Here’s its release shot. I hope you can see the normal shape of the head here. 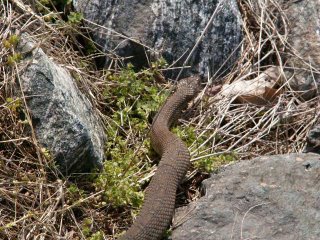 After I let this one go, Jen and I spotted the little one I had been stalking. It was swimming out away from the rocks on an angle towards the dock. We watched it for a moment as it swam along with perfect grace, its head out of the water and its body rippling through curve after curve to propel it along. I ran up the dock and dove flat onto the wood planks, whipping my arm down over the edge to grab for it. I missed by a few inches and it dove for the bottom. Jen scolded me for ruining a beautiful image by trying to catch something. Wasn't it enough to watch it? She has a point, but how cool would it have been if I had caught it?

One thing that confuses me about these water snakes is that the water right there is brackish, and I didn’t realize that northern water snakes lived in anything but fresh water.

I did look around a little beyond the house, but only found one critter. I tried a patch of forest and found that it was a really dry wetlands (see the depressions in this photo with the dark leaves?). 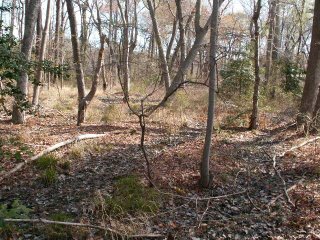 The forest had a dump site, which featured a couple boats: 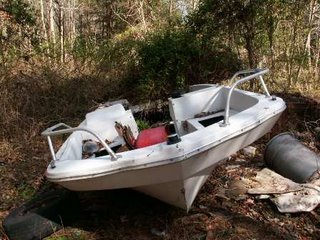 Under a log I found a marbled salamander (Ambystoma opacum). 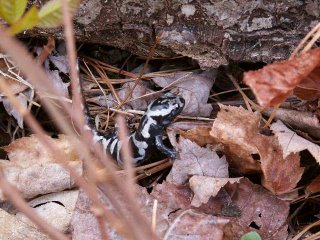 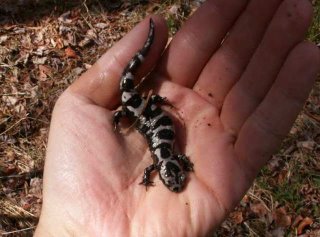 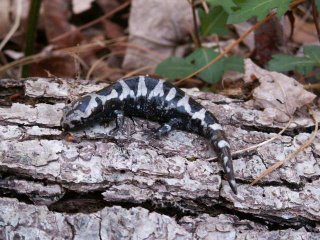 Last, I’ll leave you with a shot of a couple of the neighbors. 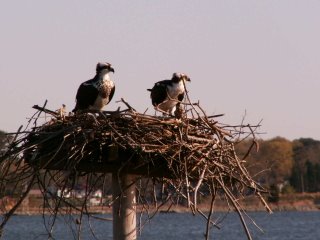 Conditions were wet and in the 50s the first day, sunny and windy in the 60s the next two days.

Posted by Bernard Brown at 6:56 PM No comments: