I swear I was having a good time already. I hadn't found anything yet - no rattlers, no toads, no rat snakes - but I was enjoying a beautiful hike/bushwack on a beautiful late-summer morning, even if I had arrived a little late for prime basking time. This is what happened when I came to this spot earlier in the spring - I left from home really early (about 5:30), hiked about as fast as I could straight up the north side of a steep ridge and then scrambled down the south side - and the sun was already plenty warm on the rocks when I reached them, whatever the clock said. 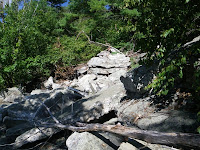 (Indeed this very morning that I type this I decided NOT to go because of the forecast. Sunny and cool won't cut it; I need some clouds). Still I enjoyed the workout, I enjoyed the time alone in the woods (not counting chipmunks and turkey vultures, which I am sure were wheeling around me because of the nice updraft - pure coincidence), and I enjoyed the spectacular views of ridges and valleys around me.
Last summer I did such a good job of visiting the same timber rattlesnake (Crotalus horridus) spot over and over again through the spring, summer, and into the fall (and indeed back into this spring), but this year was trickier. I had planned the same kind of treatment of a new spot that I had scouted, but a combination of an unexpectedly busy August work schedule and some silly injuries kept me off the slopes until last weekend.

So there I was again, on the edge of both exhaustion and a cliff again, and crossing through another shady patch on my way to some nice rocks, and there again was the most perfect rattlesnake, sleeping away the late morning on a bed of dry leaves. See it? 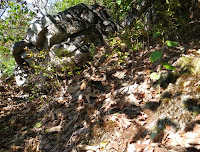 Here's an easier view. In case anyone wonders, this is my favorite timber pattern. They come in a yellow background and the black. There is a range of uglier tones in between, but my favorites are the black ones with their black cross bars outlined in the white scales. 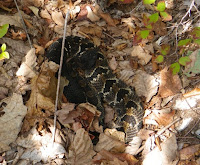 Note how the snake is backed into the leaves a little. This is why Scott argues we should get snakebite-proof boots. I'm still not convinced, though I can't say I have a solid argument on my side, mainly a resistance to buying new, bulky equipment.
I saw some more chestnut saplings here. I'm not sure if I've just missed these in the past or if I'm hitting sites that have more of them. Note the cracked swelling in the trunk - the blight at work killing the tree. 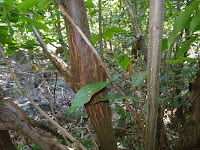