I can get a little obsessive about scouting. Of course I enjoy the actual hunt, the direct contact with reptile and amphibian species, and communing with nature, but a lot of what I enjoy about herping is the research that backs up the finds. Sometimes another herper tells you a spot and that's all there is to finding good habitat, but given two routes to getting my hands on a spotted turtle (Clemmys guttata), a scarlet snake (Cemophora coccinae), or a spring salamander (Gyrinophilus porphyriticus) – getting a tip or finding the spot myself – I'll take the triumph of starting from scratch and finding my way to the site and the animal myself.

I use the term "scouting" loosely. For the most part it refers to getting out into the woods, fields, swamps, what have you, and seeing if you can find good habitat. That might mean finding a vernal pool in the forest that looks good for spotted salamanders (Ambystoma maculatum). It might mean finding the perfect rocky outcropping for timber rattlers (Crotalus horridus), and it might mean finding a decrepit, abandoned building with sheets of tin and plywood scattered about in the weeds. I also include electronic searching when I talk about scouting. Google and other companies can show you satellite images down to a few feet of resolution, and I use these to spot things I can't see from the ground.

The satellite images do have their shortcomings. A few feet of resolution can show you a tree, but it can't show you a two-inch-wide fence. The images might be a few years old and lack recent buildings. Also, for reasons I don't understand, the images are inconsistent in their resolution. I might be able to get better resolution if I paid for it, but the free services have horrible resolution for most of central and northern . You might be able to see a large rocky outcropping, but good luck finding a small vernal pool. In southern , however, the resolution is good, and I've focused my electronic scouting there.

I started by finding some known vernal pools and using their appearance on the screen to guide my scanning. Some of the smaller pools could be mistaken for shadows of trees, but the bigger ones were notable as dark spots or holes in the texture of the surrounding forest. In a funny side note, the carpet in the hallway where I work is green with a dense pattern of raised, wormy spots on it – a lot like a satellite images of forest. A couple weeks ago I found myself doing double takes at stains on the carpet, dark spots that had all the appearance of vernal pools seen from a satellite.

My early results on actual satellite images surprised me. I examined some territory I thought I knew pretty well – not back of my hand well, but I'd been through a few times exploring. I'd found marbled salamanders (Ambystoma opacum) there and since marbled salamanders only breed in seasonal wetlands, there had to be the vernal pools nearby (here's one of my 'stock images' of a marbled salamander): 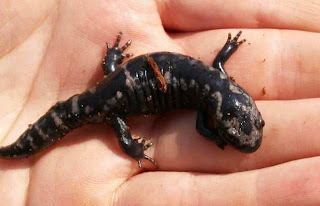 I'd looked on foot but had never found pools. The satellite images showed a couple obvious pools to check out, however, and I almost couldn't believe I hadn't seen them before on the ground.

Chris "Kid Chelonia" and I met up early on Saturday (December 15th) to investigate. We struck off in the direction of the pools, but stopped at some permanent ponds I already knew about and checked them out for egg masses,on the slight ( extremely slight) chance tiger salamanders (Ambystoma tigrinum) were in the area and had bred in them. We saw no evidence of tigers, but we did see something plop in the water right in front of Chris. We looked at each other in surprise and befuddlement. That's just what you'd expect a frog to do, but it was cold. Sure it was sunny, but the thermometer showed 31 degrees. We continued our examination of the pond and then checked out this small pool next to the main pond. You can see that the surface is iced over. 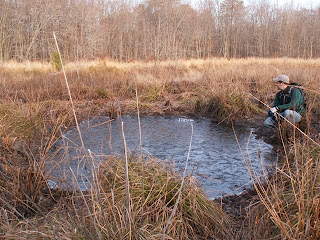 The ice was only a quarter inch thick at most, so we could still see through well enough to see the leaves on the bottom. Somehow Chris spotted a frog under the ice. By the time I made it over, the frog wasn't there anymore, but he quickly spotted another. Can you see it? 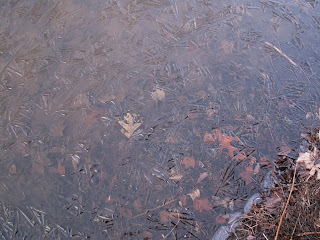 Here it is a little closer in. 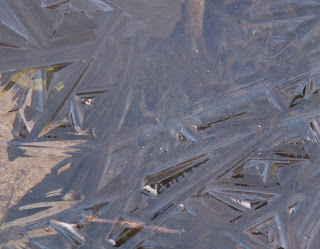 We're pretty sure it's a southern leopard frog (Rana utricularia).

We hiked on, and when we got close to where the hidden pools were, I pulled out my handy GPS unit and my notes with the coordinates. We went a little farther, and then I announced that it was time to take a turn off the path and into the woods. There was nothing obvious marking that point of the path; the woods looked about the same as they had to that point. Chris shrugged and followed, and after a few dozen yards of normal woods we started hitting briars. These weren't the rose that you can find just about anywhere but the less wicked variety you often find at the edge of wetlands in . A few yards more and we'd found our pool.

It was dry (a little concerning, but consistent with the dry weather at the end of the summer and into the fall), but the sparse brush and mossy bases around the trees and stumps told us that the spot indeed floods by the spring. Here is a picture to show what I'm talking about: 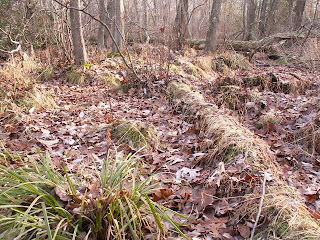 The same thing happened with the next spot I had noted. We found an actual pond, and it had the added benefit of connecting to an acre or so of forest that looked like it floods in the spring as well.

I was feeling pretty full of myself at this point, and we drove off into the nearby Pine Barrens to confirm five additional ponds and pools – all hidden by trailside vegetation or just a little too far off into the woods to be visible. These were all off trails I've walked three or four times with no clue of what was back into the woods. 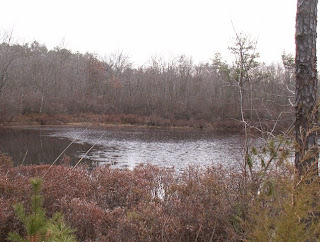 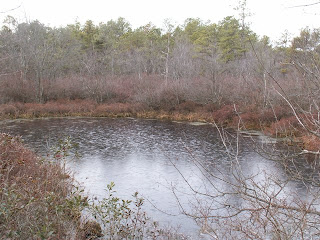 Chris and I kept on exploring for a couple more hours, and we racked up two more clusters of seasonal wetlands elsewhere in (I think we ended up covering 4 counties). The only downside was the lack of water (the two photos above are permanent ponds). Although they call them 'vernal' pools, the pools actually fill up over the fall and winter, so we need water in them soon to have all the fun we're planning in March through May.

Posted by Bernard Brown at 6:54 AM No comments: