I often wonder about how Nature (or the herping gods, or just "God") metes out rewards for herping effort. Sometimes we do everything right - we study landscape and weather conditions, we wake up early and pack the right equipment, we drive far, then hike far, and with our muscles aching and water bottles nearly empty we find something spectacular. The universe feels just in those moments of triumph - we worked hard, and we were rewarded.


Other times we curse our luck and shake our fists at the heavens. These are the times we study landscape and weather conditions, wake up early and pack the right equipment, drive and hike long distances, and then have to call it quits with sunburns and aching feet even though we've found nothing. The cosmos is a fickle and mean place in those moments, ungrateful for our sacrifice of sweat and time, sleep, and (most dear) family and social obligations ignored.


And then there are the times when we are rewarded for nothing - being in the right place at an unexpectedly right time? Keeping our eyes open? Wearing clean socks?


On Memorial Day Scott and I took a trip to Forbidden Ridge. That's not the real name of the mountain, but it's our name for it - last year I explored a ridge of spectacular rattler habitat and told Scott about it, but I wanted to go other places instead of that ridge in the fall, leading Scott to joke that I didn't want him to hit it, and thus to my naming it "Forbidden Ridge."


Well, this Memorial Day Forbidden Ridge was allowed. I didn't know if we were hitting it too late; a couple earlier rattlesnake (Crotalus horridus) trips had gone poorly, and we were getting the impression that they had dispersed earlier than we had expected they would.


We had a simple plan for the Memorial Day hike. I had found one snake on a ledge on Forbidden Ridge in August - a fat, yellow, beautiful pregnant female basking to 'cook her babies,' to use the elegant herper expression. Scott and I set out from our car to hike right to that ledge and work out in each direction from there.


As I type this my left leg is elevated alongside the keyboard. My left knee is my 'bad' knee, the lingering legacy of my brief tae kwan do hobby and the injury that ended it nine years ago. Four years ago I spent too much time on a steep slope in the Wissahickon cutting back devil's walking stick, an invasive exotic tree as nasty as it sounds. My bad knee ached and swelled, apparently because the relatively loose ligaments permitted more play on that steep slope than the bones and cartilage could take. I've hunted timbers before on other slopes, but Forbidden Ridge is probably the rockiest, most precarious to navigate, and again my knee was not up to the task. I'll point out that I've herped many rocky slopes with no such injury, and I've hiked for miles and miles on ridge tops without anything more than sore muscles. My point is that Forbidden Ridge is a bitch of a mountain. Some stretches of the path are even dirt and gravel, but other long sections are nothing but loose boulders (talus slopes - kind of like gravel poured out of a bucket but with the stones ranging from the size of a basketball to that of a Mini Cooper). You don't so much walk as you jump, scramble, and slide your way, landing each foot at funny angles on hard rock. Off the trail you get more talus and short ledges you have to climb up onto and then back down to get to the next. Guess where the rattlers hang out? None of this is easy on the knees.

About halfway through one of these sections of boulders but still way downhill from the destination ledge, Scott pulled up short with a stunned expression, not scared, just pure overwhelming amazement. I had been picking a path up the hillside parallel to his and a few yards over, but I quickly looped back to come up behind him. This is what we saw: 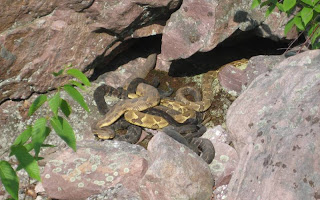 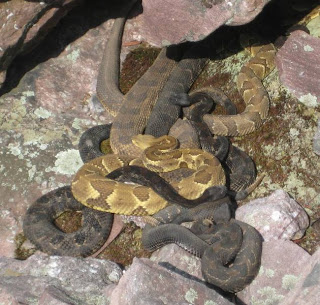 A couple snakes skedaddled as we stared in awe and pulled out our cameras, and we're pretty sure there were nine to start with. Here's another shot Scott took from right above them. 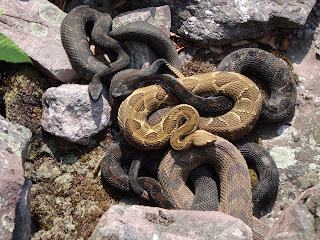 Once the more nervous snakes had retreated the others (six or seven) settled down and resumed their basking. Scott spotted another small black rattler basking a few feet away, making it ten for this spot.

What the hell do you do in this situation? It was the closest thing to a religious vision, a supernatural apparition, that I've ever seen. Do you wait for the voice of God to speak to you from the rock, as it would from a no-more-spectacular burning bush? Do you just take photos and move on? We debated the merits of catching them and sexing them, but in the end we just hung around for a few more minutes ogling the snakes and snapping photos.

One or two had buzzed at us in retreat, but the remaining snakes stayed pretty quiet. One responded to Scott's shifting a few feet away with my favorite rattlesnake communication - a few lazy shakes of the tail, enough to let us know it was still watching us, but clear that it didn't feel like disturbing its morning enough to move or even rattle at full speed.

Eventually we tore ourselves away and continued up the mountain, elated and giggling but aware that the weather conditions must be about perfect right at that moment; if any other snakes were out, we'd best get moving to find them.

And find them we did! If ten rattlesnakes wasn't enough for one morning, how about these three ten minutes later? (dig me grinning like a love-struck idiot in the last shot): 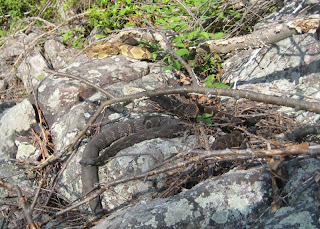 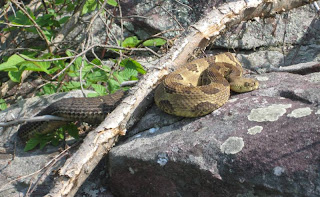 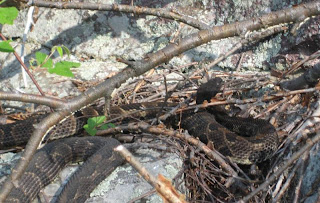 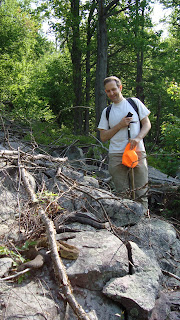 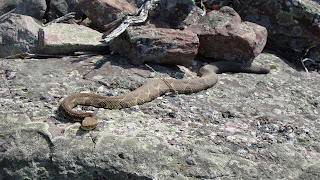 (sometime before that one snake a bush had picked my pocket. The photo above is Scott's, because when I reached for my camera - technically Jen's - it was gone. We retraced our steps and found it hanging from its wrist strap on a twig in a bush I had squeezed by.)

By this point our count had hit fourteen, an absurdly high total of rattlers by anyone's standards. We still hadn't hit the target ledge, though, so the day wasn't over yet. Scott and I decided to split up for a while, the better to cover more ground, and in about a half hour I got his call that he had found two more (=16).

Shortly after that I reached the original destination ledge and found these two black rattlers (=18) chilling out in the shade, an indication that the day had grown too warm for direct basking. 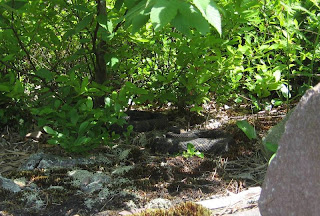 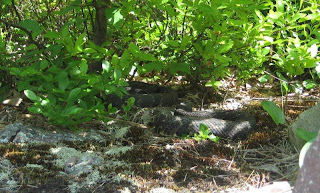 That they were sitting in the shade meant two things to us - first we were probably out of time to discover more snakes; rattlers in the shade are harder to see than rattlers sitting in the sun. Second it meant that we really had better watch our steps as we waded through thick brush between the outcroppings and boulders.

Here are some shots of the difficult greenbriar. Its thorns aren't as hard and sharp as multiflora rose, but, as Scott observed, its flexibility gives it the nasty habit of wrapping around you without your realizing it and only piercing your clothing when you're already well entangled. Here's a bank of it followed by an individual vine. 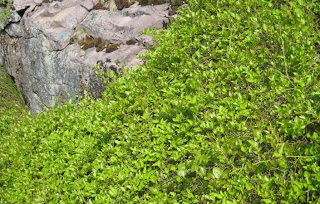 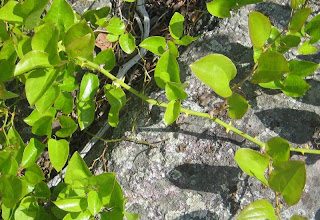 At some point we had to call it quits, but on our way back down the mountain we had to check in with the big pile o'rattlers again. We always worry about other herpers using our photos to deduce the locations we herp (hence no big habitat shots in these rattler posts), but it came as some comfort that even the two of us, who had been there a few hours earlier and had the coordinates in hand, wandered around in circles for five minutes before Scott said, "Oh, there they are."

Three were sitting in the shade together: 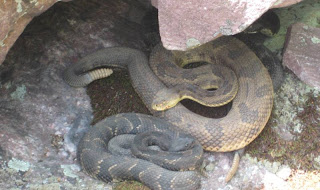 Four or five more (hard to tell) were a few feet away chilling under a bush: 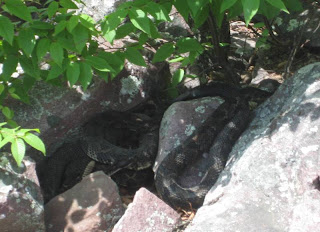 At some point on our hike back to the car, Scott commented that it's a little sad that we'll never see something that amazing again. I'm not sure I agree (a ratsnake or a box turtle would put another similar trip over the top), but that day now sits high on my list of lifetime thrills. I feel compelled to summon eloquent words of poetry to describe the wondrous sight of all those beautiful snakes basking in the sun together, normal language not sounding up to the task. But I keep coming back to the cruder terms of my childhood - it was awesome, awesome! AWESOME, AWESOME! It was unconditionally awesome, so awesome I messed up my knee and I don't really care; it was worth it.

Posted by Bernard Brown at 4:37 AM No comments: