Reason number one is very simple: they’re too shallow! I don’t know why this hadn't occurred to me before, since cranberry bogs are dug to only to wading depth, and, once abandoned, gradually fill in with sediment and debris.

On Monday I never sank in deeper than hip deep while I was on my feet, and that included up to a foot of mud on the bottom. There were a lot of stumps and fallen branches in there as well. The mud and branches made walking extremely awkward, and in the water it was impossible to get in any strokes besides the occasional breast stroke. So, the easiest way to move forward was to lay flat and pull myself along by grabbing stumps and branches.

The other reason, much more speculative than the first, since I haven’t polled others who have tried swimming in old cranberry bogs and chosen not to do it again, is the burrs. I’m not sure what plant they come from, but I came out of that pond covered in prickly little burrs. Now, I did go in with my clothes on, so maybe if I went in topless and changed out of my bathing suit right away that problem would be solved, but these burrs were a royal pain to pick off once I was out.

So, was this trip a total failure? No, I actually did learn something important in the hour and a half I spent literally wallowing in the mud of a Pine Barrens bog: Turtles are not as scared of me when I’m on my belly. Most basking turtles will jump in the water the moment they spot you, if you’re on foot. They let you get to only a few yards away, however, if you’re flat on your belly in the water. I hope I can find a deeper body of water, so that I can dive from about twenty feet away and swim the rest of the way from below.

Here are some photos of the turtles I took from the shore. I’ve been asking herping buddies, and most agree that the big turtles in these pictures are redbelly turtles (Pseudemys rubriventris). The others are the ubiquitous painted turtle (Chrysemys p. picta). 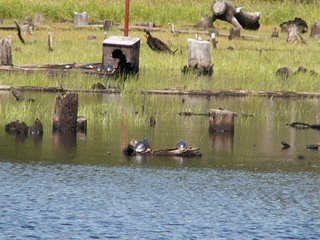 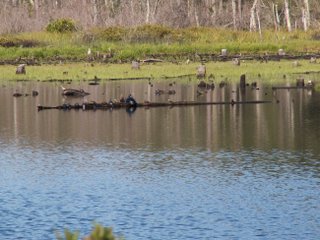 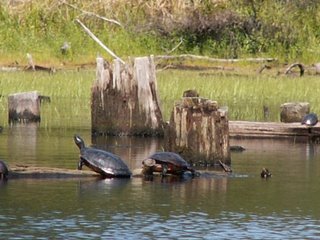 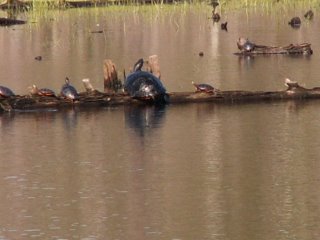 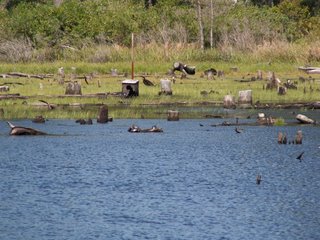 Redbelly turtles are threatened in Pennsylvania, and in many waterways have been displaced by introduced red-eared sliders (Trachemys scripta elegans). From far away most big basking turtles look alike, and they always seem to jump in the water before I can get a good look at them.

Here are a couple photos of a Fowlers toad (Bufo fowleri) I saw later in the day. 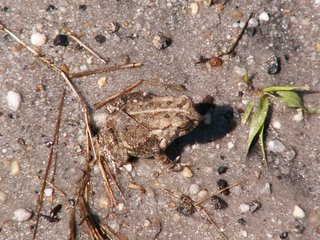 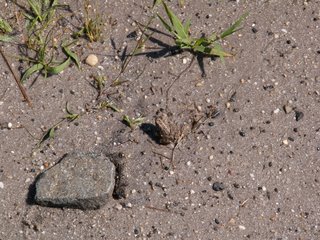 The weather on Monday when I went out was damp and a little hazy with temperatures in the mid 60s soon after dawn. The temperatures rose into the low 70s and the sun was shining when I headed home around mid-day.