This will be the first of the frustrated winter herping posts. I know, it isn't quite winter yet, and I should wait until it's been weeks since I've seen a live herp, but I keep riding out along the Schuylkill River and reflexively examining logs and whatnot for basking turtles, even though it's in the 40s. What's frustrating is that they're in there somewhere; it's not like turtles fly south for the winter.
Posted by Bernard Brown at 7:42 PM No comments:

Thanksgiving isn't usually a time for herping, at least in the Delaware Valley, but we were in North Carolina. My sister's boyfriend's parents retired to eastern North Carolina, near the Croatan National Forest. They rented a beach house on Emerald Isle and invited us all down.

Now, this was a family trip, not a herping trip, and even if the Croatan is a herping playground, the fall weather was still kind of chilly (rising from the 50s into the low 60s while we were there). I was tempted to hike along freely through the woods looking for basking snakes, but the weather also included hordes of men with guns and dogs hanging out on all the dirt roads. The men with the guns stayed on the roads; this was baffling to us, since we think of hunting as either active walking around or hiding in habitat. Finally a ranger explained that they were letting their dogs run around until they flushed something (it sounded like everything was in season) after which they'd hike in and shoot it.

We decided against wading through the vegetation like a deer, or a bear, or (anything else the dogs might bark at and draw fire) and stuck to the roads, watching the canals. This was not a random idea; a few years ago on a herping trip (in warmer, wetter weather) we found lots of fun critters in those canals, spotting cottonmouths (Agkistrodon piscivorous), various turtles, and oodles of frogs.

Here are some shots of the canals... 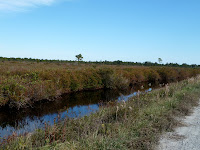 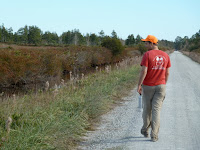 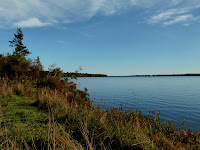 All that we found was the mystery cooter, with a redbelly (Pseudemys rubriventris) as a lead candidate.
Posted by Bernard Brown at 7:24 PM No comments: