On Sunday (March 22nd) I went back for another fix of spotted turtles (Clemmys guttata). It was a blast once again, and I only hope I keep finding spotted turtles through the spring and then find something equally fun and engaging to catch once we get into the summer (black ratsnakes - Pantherophis obsoleta? Timber rattlers - Crotalus horridus? Map turtles - Graptemys geographica?).

Kid Chelonia (Chris) was my partner on this trip, this time to two more sites I had researched and recently ground proofed with Scott. You know I obsessively check the weather before herping trips, and I'm sure you also know that forecasts aren't always 100% accurate. The sun was out when we reached site number one, but we were surprised by the brisk breeze and a wafer-thin layer of ice on some of the pools when we climbed out of the car.

We hiked back into the woods - at this site the understory was blissfully open. Instead of swimming through brush and thorns we could manage several decent strides in a straight line before tripping over greenbriar.

We arrived at a large pool and I waded right in. Chris hadn't brought his waders, so scrambled along the shore while I waded around at knee to mid-thigh height. 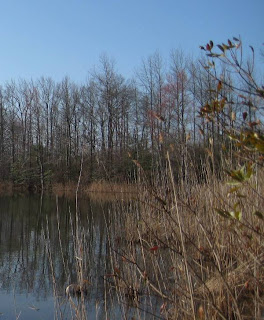 We had planned the day by starting with a visit to the site we thought least likely to produce, thinking we'd hit the more likely site around noon when the warmer temperatures SHOULD bring out more spotted turtles.

So it should come as no surprise that the first site gave up its spotted turtles easy and with next-to-no effort. I had only taken a few steps when I saw the star-spangled little black turtle walking along the bottom of the pool. 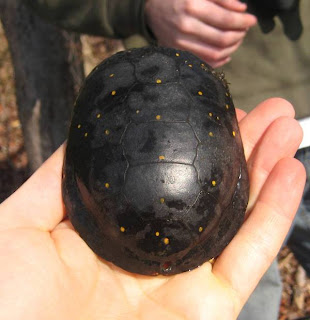 I plunged my hand into the freezing water and pulled out this guy, hooting and hollering at Chris - proud that once again I'd picked out another spotted turtle site (of course it's quite possible that they're more common than I've realized, and I could do as well throwing darts at a map). He was an older male, light in the hand, making us wonder if he was in poor health, but he was proof that 'thar be turtles!'

We looked for another few minutes and came up with another male, this one not walking but sitting with his head and front end under some leaves at the bottom; I think he must have seen me coming and made an effort to hide. 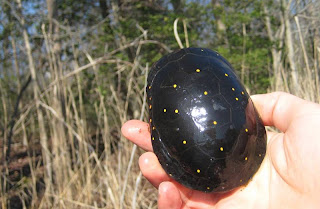 He was younger, prettier, and a little heavier - needing to eat a little less to gain back the weight he must have lost over the winter.

Pretty soon after this Chris and I called it quits. There are a lot more ditches, pools, and marshes at the site worth exploring, but we'd accomplished what we'd set out to do - answered the question of whether or not spotted turtles live there.

But the spotted turtles weren't done with us yet! On the way out we walked back around the marshy pools that had been surprisingly icy on our way in. By now the water surface was all liquid, the sun was shining strongly on the pools, but that wind was still blowing.

The eagle-eyed Kid Chelonia still managed to pick out another spotted turtle basking at the edge of one of these marsh pools. It slipped into the water right before I could get to it, and a few seconds of feeling around under that near-freezing water was enough to convince me to let the little critter go.

Chris managed somehow to spot another one, pictured here below, this one pretty much impossible to reach before it could get away, and indeed it scooted into the water as we were taking pictures. 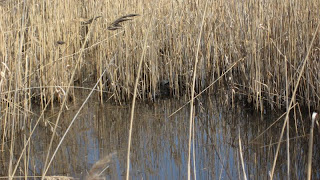 So what about spot number two, the one that we were expecting to produce buckets of spotted turtles with next-to-no effort? Well, it didn't pay off.

And it was a LOT more work. I took this photo at eye-level, midway through one particularly rough thicket. 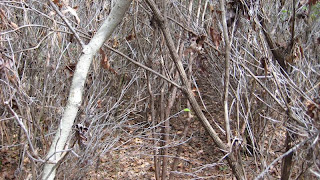 To be fair, there were lots of turtles, just no spotteds. There were a couple red-bellied turtles (Pseudemys rubriventris) basking too far off for us to get a good photo, and there were dozens of painted turtles (Chrysemys picta) that I did take some photos, none of which turned out looking like much more than distant bumps on logs. One painted turtle was basking on the shore, and I beat him into the water for kicks. He was sticking his head all the way out and kicking his legs - would have made a beautiful photo with the bright yellow and red striping, but of course as soon as I turned on my camera he basically clammed up on me. 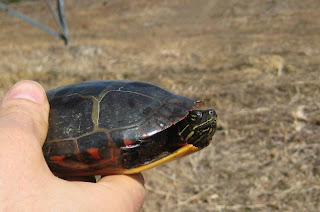 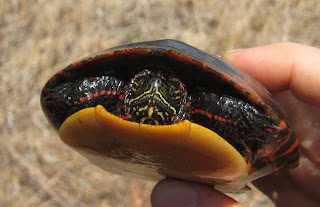 We were a little disappointed, but we had little trouble shrugging that off. We had put another pin on the spotted turtle map, handled some beautiful creatures on a gorgeous (sunny, temps rising up into the 50s) day and that was plenty.
Posted by Bernard Brown at 6:56 PM No comments: