About a week ago I got hit with a fierce snake craving. I needed to find a snake, hold it, even smell the musk on my hand. I had been working from home, which I don't always do, and felt pulled in two by the need to finish what I was doing and the knowledge that somewhere outside the window behind me, well within reasonable striking distance, there were snakes.

I held out until 6ish, the decision to finally go acting like a released rubber band, snapping me out the door and onto my bike, skimming through the streets of West Philly. I headed for the Woodlands Cemetery, a well-groomed, historic cemetery with a resident brown snake (Storeria dekayi) population and garter snakes (Thamnophis sirtalis) that (I think) wander up from the Schuylkill to hunt worms and slugs.

I've been finding them under one particular pile of old logs, but each log that I lifted revealed nothing but arthropods (insects, spiders, pill bugs, centipedes, etc.), mollusks (slugs), and annelids (worms) - nothing wrong with those phyla, but they don't do it for me like the vertebrates with the most vertebrae (yes, I know that vertebrates are a subphylum).

Feeling a little crestfallen, I walked back to my bicycle, but happened to pass by a board I hadn't noticed before (how I hadn't noticed such a nice board before is its own embarrassing question):

It was in a nice spot, near some brushy growth that the target snakes might like for hunting grounds:

I pried the board up and with that delicious little thrill of discovery spotted two snakes cuddled up next to each other: one young brown snake and one young garter: 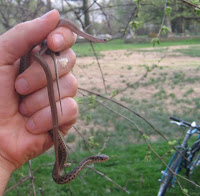 These photos offer a nice opportunity to compare these closely related species. The garter is a generalist. It tends to stick around water, where it hunts frogs, tadpoles, and small fish, but it also goes after worms and slugs, and will eat almost anything else it can swallow whole. When I was a kid I kept a large female garter who routinely ate adult mice. The garter snake has a very general sort of snake head, not particularly adapted to an aquatic life (for which other snakes have nostrils and eyes towards the tops of the head), neither to digging (no scales adapted to moving dirt, as in the pine and bull snakes (Pituophis species) - all pretty average. The brown snake, by contrast, has a little head compared to its body girth. Its soft, invertebrate prey smoosh down to fit, so it faces no need to work its jaws around any wide, bony vertebrates. It also has a relatively blunt snout. This is an adaptation to eating snails that you see in other unrelated snail-eating snakes around the world. That slightly squared off shape gives them some leverage to pry the snails out of their shells.

After a couple minutes of photos and ogling, I put the board back and released the snakes - an important order of operations, so that you don't crush the snakes with the weight of the cover object. I hopped on my bike and rode home - I had more work to do, but the two snakes were enough to get me over, along with the musk I could still smell on my hand.

One last note about snake musk - all snakes have musk glands; this is one of the few characteristics that all snakes share, along with lacking ears and eyelids and a few other more arcane anatomical features (many primitive snakes such as boas and pythons do have vestigial hind legs, so we can't use leglessness as a unifying characteristic). The musk glands are in the base of the tail, opening at the vent. Scared snakes will often poop on you, as you can see in the above photos, but they will also often musk as well, which is the smell that sticks with you even after you wash your hands. Some snakes' musk is more powerful than others' (next time you pick up a water snake - Nerodia species - you'll smell what I mean), and species tend to have distinctly scented musk - nothing smells quite like a king snake (Lampropeltis getula), though it probably takes a few years of getting musked on before you notice the differences. No matter what, it's the smell of success :-)