Was there anything selfish about writing a bog turtle (Glyptemys muhlenbergii) article for Grid? So far my Urban Naturalist articles for the Philadelphia sustainability magazine has covered a few herp topics - for example see this year's articles on American toads (Bufo americanus) and garter snakes (Thamnophis sirtalis) - but they've been about common critters that didn't require any special trips or research on my part. The Nature Conservancy (TNC) has been interested in having Grid about their activities (I had a lovely lunch with one of their PR staff last year), so highlighting their work preserving bog turtle habitat was a win for them, and one of the premier federally-listed species in our region is surely a valid topic for a magazine about sustainability in the Philadelphia area.

But I still feel a little guilty for having had so much fun. Scott and I would love to find a bog turtle on our own - readers of this blog might recall that my favorite finds are those that I've achieved through my own scouting and research - but they're federally listed (threatened) for a reason, they're cryptic as hell where they do occur, and they mostly live on difficult-to-access private land. I'll have fun with whatever bog turtles I can find, however I find them.

Last fall my TNC contact invited me out to see bog turtle research in action. I couldn't make it, but this spring we arranged for me to meet up with a TNC Land Steward to see bog turtle habitat and hike along as he observed the actual turtles. 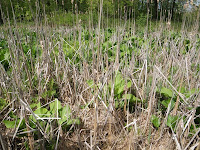 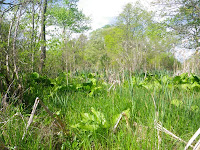 I met George Gress at the site (because of the sensitivity of bog turtle habitat I can only say it's somewhere in Southeast PA, and I ran all photos by TNC to ensure I wasn't including any identifying features) and we chatted as we disinfected our waders to reduce the chance of spreading turtle diseases site-to-site (sprayed with 10% bleach solution followed by a rinse with water. Given the growing list of epidemics of introduced species - microbial and bigger - we should all do this all the time).

Soon we were slogging through the marsh and passing through fences designed to keep livestock in or out of different sections of the property. Bog turtles live in shallow marshes that tend to shift into wet forest if left alone. Once upon a time large native herbivores ( think elk, bison) probably helped keep the marshes open, and beavers helped create new marsh as their ponds filled up over decades. More recently farmers who grazed livestock in these 'wet meadows' unwittingly helped the turtles, and today TNC and other land managers utilize cattle and goats to keep the marsh open. Here are some of our four-legged partners. 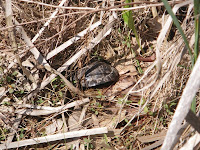 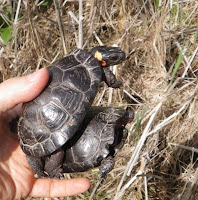 One was an old female (think at least in her forties) with one foot gone and toes missing from another foot, and deep notches from earlier researchers.

(note the stump leg near the heel of my thumb) 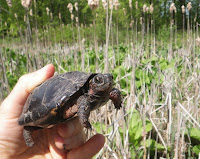 Her companion was a male George didn't have in her records. I got to hold the turtles as George weighed, measured, and took notes on the turtles and notched the new guy, who rewarded George with a chomp on the finger (what would you do if a giant monster sawed away at your shell with a file?). 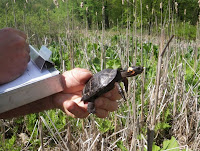 Here's that male in an uncomfortable position: 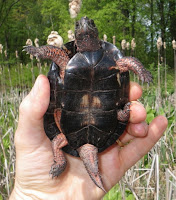 A little while after that George found another pair, leaving me thrilled to hold bog turtles again, but starting to feel a little incompetent or left-out: George 4, me 1. 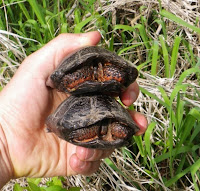 "A turtle!" George claimed as we slogged fifteen feet apart in high reed canary grass. I turned quickly to my left and started jumping over to George's position. That's where I felt something funny under my left foot.

Yep, it was a bog turtle. The Nature Conservancy was gracious enough to have me out on one of their secret properties to observe a federally threatened species, and I stepped on one of them.

The turtle was fine. It was sitting on a big pile of dry grass sitting on a foot or so of mud, so in the split second it took me to notice it, I had only pushed knocked it a little sideways. Of course George than spotted ANOTHER, smaller turtle a couple feet away.

His first turtle and the little one he saw were our old friends the spotted turtle (Clemmys guttata), and while he marked the little spotty (as they get rarer, TNC is keeping an eye on them too) and took notes on all three, I got to give them a nice once-over.

Here's the bog turtle with the larger spotted: 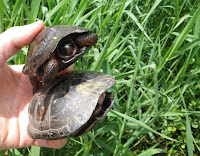 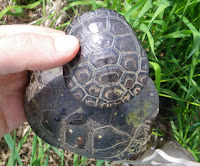 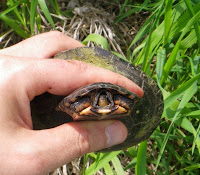 Selfish or not, I had a great time and I hope the article looks good when it runs next month. I appreciate TNC's hospitality and George's friendly and expert guidance. I should mention I have been a TNC member for years, and I feel even better about what my dues are supporting.
Posted by Bernard Brown at 8:02 AM 1 comment:

Here's a quick skink update. First, dig the red/orange coloration on the head. The heads of male five-lined skinks (Eumeces fasciatus) flush red in the breeding season. A friend's mother connected me with a nature center where she volunteers, and I hope to ferry the little guy out there soon.

In the meantime, he's been a fun guest. We've developed a morning routine: I spray down the sides of the tank to give him something to drink (apparently captive skinks don't immediately comprehend water dishes) and every-other day I leave him some mealworms in the old peanut butter jar lid. He waits five minutes and then pops out of the shredded paper to lap up the water, snap up the mealworms, and bask for a while.

The whole experience reminds me of the value of temporarily captive critters. However opposed I am to the pet trade, I do think it's a great idea for kids and older naturalists to keep something they've found for a short period of time to observe it more closely in captivity. As long as it's a common species, you meet its short-term needs while you're hosting it, and you take care to avoid any disease transmission (bleach the hell out of everything and keep it separate from any other critters you keep) it's a great way to gain a deeper understanding of animals you usually only see in flashes and glimpses.
Posted by Bernard Brown at 7:51 AM No comments: