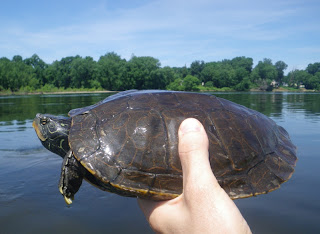 It was like a reunion with the water. Since last October I'd been gazing at rivers from above the surface, longing to dive in, but the water was too cold (for me; the turtles can function quite well in spring weather - chilly water and warm sun). That's a long time for it to be too cold. And then up until the middle of June the water was warm enough but too high and muddy.

Finally, though, the weather dried and warmed up. The Delaware dropped and cleared, and I found a good Sunday for jumping in.

To be clear, 'jumping' isn't quite how I do it. The place I've found to access the river is off a sandbank (or island, depending on the water level), and I have to wade my way out to the rocks. I find it difficult to walk (waddle) in flippers, so my MO is to wade out in water shoes to a nice boulder at about thigh depth, drop my backpack, change footwear, and then begin.

It really is like entering another world. I have heard this from salt-water reef snorkelers and divers, and in my experience the same holds for fresh water. What impresses me is the sensual totality of the experience. At first, it almost always feels cold. Even if the water is in the mild 70s, the air is usually warmer so the contrast makes me shiver a bit as the water rises up my legs and, ultimately and conclusively, over my face. I love the pressure of the water as an enveloping embrace, the heavy tension as it cuts off the world above. The light turns pale green as my mask goes under, and my hearing fades to liquid murmurs.

I could just drift at first and let the current pick me up to its speed, but I like to give a little kick with the flippers to feel that acceleration boosted by the river.

Here's one view of the target: 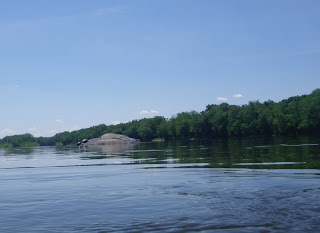 Each boulder sported at least a couple map turtles (Graptemys geographica) soaking up the sun. In the past I would have held no hope of grabbing a turtle from its rock. Most aquatic turtles are exceptionally wary, and map turtles are relatively wary aquatic turtles. They drop in if they see you looking at them funny from a hundred yards away. Thus my strategy had previously been to let them dive and then search for them hiding on the bottom.

Then, last year, I figured out an underwater ambush approach. The key is the flippers. Turtles don't seem to spook much at the sight of the top of a snorkel and mask drifting towards them, so I can very gently propel myself along with the flippers (keeping them under water) to twenty or so yards away, then submerge, cover the rest of the distance holding my breath, and then pop up right next to them on the boulder. Grabbing them is a bit of a challenge even at that point, but I have discovered that an average-sized adult man with flippers can swim faster than a map turtle, so it's easy to run (swim?) them down even if they jump in.

Here are some of the results: 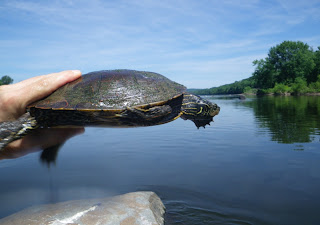 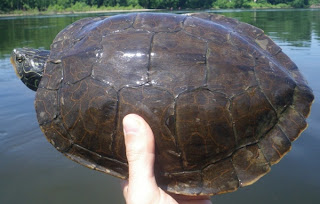 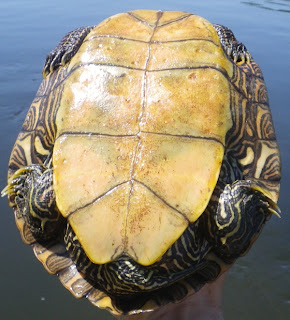 These are females. Usually I think of the males as easier to catch, but for some reason (or random luck) I was unable to catch any males on this trip.

The females are much, much larger than their mates and live somewhat separate lives. They like deeper water, they tend to like basking spots further off shore, and they eat harder-shelled foods (think clams and mussels rather than bugs) with those beefy heads.

I did find one big girl sitting on the bottom. This is always a thrill, when the river bottom I'm used to  (rock, rock, rock, bigger rock, rock, log, rock, rock, rock... to the point of hypnosis) is broken by the tapered, leaf-like outline of a map turtle. 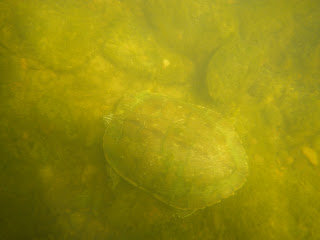 Sometimes I do think they look better underwater. 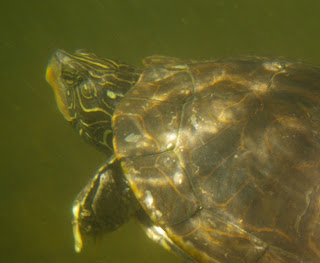 Turtles aren't the only neat critters in the river. I saw an impressive channel catfish in the crease under one boulder before I could get my camera out, but this yellow lamp mussel held still for me. 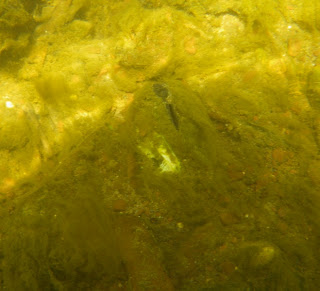 A couple times I pulled myself out of the water to rest on my boulder. It was so warm and cozy; I hadn't realized the water was chilling me a little until I felt the sun again. It occurred to me that I was becoming more like a turtle the more time I spent in the river.

I accessed the river via a path along a canal. On the way back I saw plenty of turtles in that water as well (I had seen some stink pots - Sternotherus oderatus - on the way in too), including this map turtle... 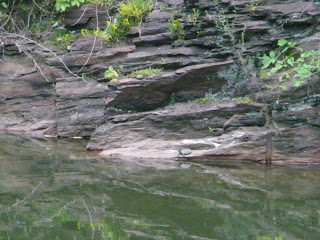 And the more impressive redbellies (Pseudemys subrubrum), who tend to like slower, murkier water than the maps. 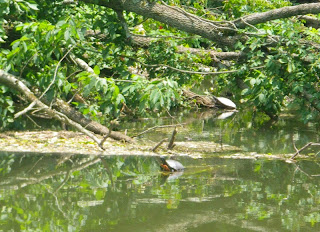 A few turtles had lost their nests to predators, as evidenced by these shriveled shells next to a dug-up hole. 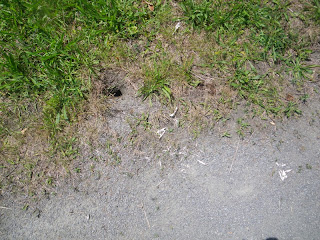 I'll close with a bone to toss to the people who like the warm-blooded, furry-type wildlife. I know deer on either side of the river above Trenton are about as remarkable as squirrels, but the doe and fawn looked cute together. 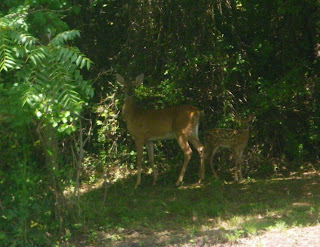 Posted by Bernard Brown at 1:30 PM No comments: