Earlier this week I had to email Scott. I had felt a sharp pang, a mix of frustration and despair at the thought of finding no more reptiles (and few amphibians) until April. Maybe it's similar to what children feel going back to school, or the football fan the Sunday after the Superbowl.
Scouting and flipping for amphibians can help ease the distress, but only so much. Maybe I need to treat this kind of herping as a weak medicine, best taken often.

On Sunday Mike and I headed to a large park to the west of Philadelphia for some basic rock flipping. I was hoping to find a red salamander (Pseudotriton ruber), and so I focused on rocks and debris around this kind of seep: 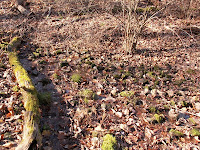 We found none, but we did see some more common salamanders. Here's one of the omnipresent redbacks (Plethodon cinereus):

...and here's a dusky (Desmognathus fuscus): 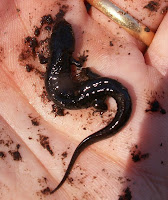 Here's a quick reminder on our December DVHS meeting this Friday. We'll be hearing about the least-well-known order of the herpetological world, the caecillians. Our speaker Ed Kowalski refers to them as "living sock puppets."

The meeting will be at 8pm in Maple Shade, NJ. See the DVHS' website for the full directions and details: http://dvherps.wordpress.com/meetings/
Posted by Bernard Brown at 11:42 AM No comments: